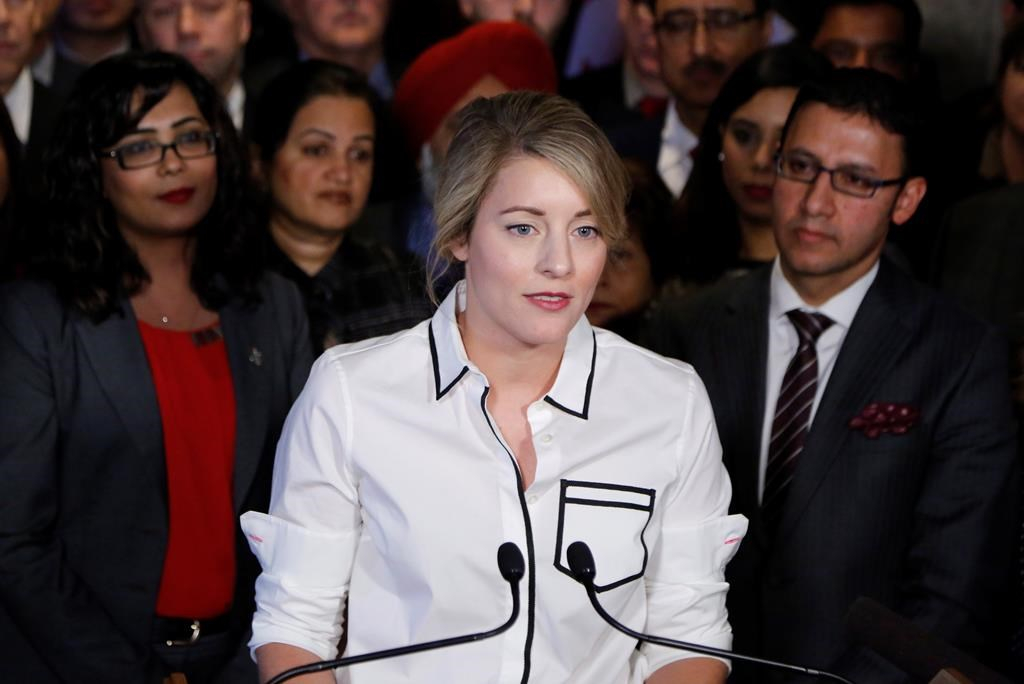 Flanked by her Liberal colleagues, Canadian Heritage Minister speaks to reporters outside the House of Commons on Feb. 17, denouncing Islamophobia. Photo by The Canadian Press
Previous story

Canada's Muslim community felt the embrace of an outpouring of support Friday in the wake of stinging personal attacks against a member of Parliament who sponsored a motion to condemn and combat Islamophobia, even as negative reaction to the Liberal-backed proposition appeared to escalate.

Heritage Minister Mélanie Joly, who this week fronted the Liberal party's blessing of the motion, known as M-103, was met by expletive-laced condemnation on social media from outraged Canadians.

"No offence but I'm so sick of all you white Liberals selling your (expletive) for Islam," one post read.

Others made denigrating remarks about Muslims.

As the online vitriol was being unleashed, images emerged on Twitter of a short-lived anti-Muslim protest outside Masjid Toronto showing demonstrators being watched by police as they carried signs reading "Ban Islam" and Muslims are terrorists."

"No Canadian should feel intimidated when walking into their synagogue, church, temple or mosque. We are thankful to our fellow Canadians who joined with us today against this attack on religious freedom and Canadian values," the statement said.

The comments aimed at Joly were typical of those that Iqra Khalid said she had received since she introduced the motion late last year.

The Mississauga, Ont., MP told the House of Commons Thursday she received thousands of sexist comments, Islamophobic remarks and even death threats after bringing M-103 before Parliament.

Khalid read the transcript of one particularly disturbing YouTube video sent to her office in which the author suggested she should be shot. She did not immediately respond to a request for an interview Friday after her office said she had returned to her riding.

Right-wing activists and some Conservative leadership candidates have said they fear the motion could be a precursor to a crackdown on free speech, even though it doesn't alter the country's hate speech laws.

Despite the visceral reaction, the Ahmadiyya Muslim Jama'at Canada said individual Canadians and elected officials alike reached out in the 48 hours since the federal Liberals voiced support for Khalid.

Still, spokesman Safwan Choudry said he was troubled by the messages issued to backers of the motion.

"We are troubled, but not surprised," said Choudry.

"The anti-Muslim sentiment does run deep and does run strong, so that's why we're not surprised."

Choudry questioned the mindset of people who think it's OK to launch such attacks against elected officials.

"(Khalid) is not just a Muslim, or a woman, but she speaks on behalf of the country," he said.

While Joly called the reaction to her support of the motion "completely unacceptable," the minister said she decided to ignore the comments directed at her, and instead would try to prevent more messages from being posted, and work with social media companies to see what actions could be taken to curb abusive language online.

"We must be careful not to tolerate any form of abuse," she told reporters outside the Commons.

Choudry said he was concerned that the uproar over the motion, combined with the Jan. 29 mosque shooting in Quebec City, will tarnish Canada's international reputation as an open and inclusive society.

"We hope it doesn't taint the image and reputation that Canada has built worldwide," he said, adding that recent images of Prime Minister Justin Trudeau welcoming Syrian refugees with open arms have been cemented in the minds of people across the globe, particularly in Muslim countries.

Muslims in Canada are grateful for the outpouring of positive sentiment and support from people across the country in reaction to the Quebec terrorist attack, the Canadian Muslim Forum said in a statement urging Parliament to adopt M-103.

Still, public awareness campaigns should be developed to counter misconceptions about Islam, the organization said, warning that hate speech and rhetoric, if left unchecked, could create a breeding ground for fear and violence.

"Muslim women and girls are most often the target of harassment and discrimination that can be labelled as incidents of Islamophobia," said forum president Samer Majzoub.

A Liberal minister spoke about his past as a bus driver. Tories started laughing