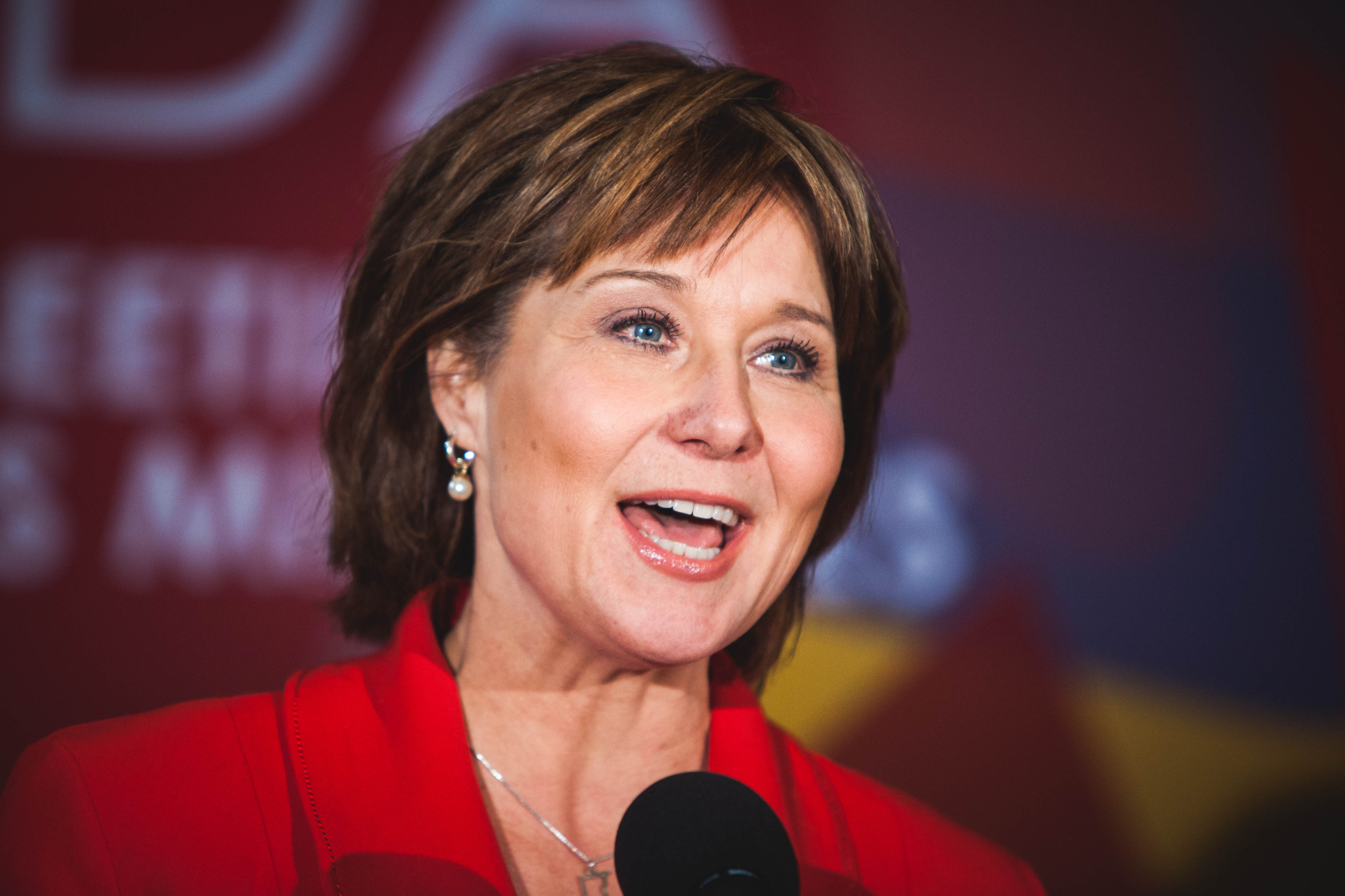 British Columbia Premier Christy Clark speaks to reporters in Ottawa during a break from national discussions on climate change on Dec. 9, 2016. File photo by Alex Tétreault
Previous story
Next story

British Columbia has been swamped by a torrent of oil, gas and mining lobbyists and a flood of political contribution money, that has primarily benefited the ruling Liberal Party and drowned out the voices of environmentalists, according to a new report by the Canadian Centre for Policy Alternatives.

The report, Mapping Political Influence: Political donations and lobbying by the fossil fuel industry in B.C., highlights an exclusive club of seven firms and organizations—Spectra Energy and Enbridge, FortisBC, Encana Corp., Chevron Canada, the Canadian Association of Petroleum Producers (CAPP) and Teck Resources—that were both top political donors and the top most active lobbyists in the province during six- and eight-year periods examined.

"Few people can afford to make the kinds of contributions that these companies are making, and that [creates] a serious problem for the fairness of our electoral system," said Shannon Daub, CCPA associate director in the B.C. office and co-director of the Corporate Mapping Project, of which the report was prepared in conjunction.

"You have a barrage of lobbying coming from the fossil fuel industry that other interests and other voices simply cannot compete with."

National Observer contacted all seven groups and organizations named as overlapping donors and lobbyists, as well as a number of other voices named in the report. (Spectra closed a merger transaction with Enbridge on Feb. 27, but the report treats the two as separate as it looked at historical data.)

In response, CAPP, the main lobby group representing Canada's oil and gas companies, said it attends events for "parties of all political stripes" in the province and that the frequency of party-hosted events often correlates with funding received by CAPP or other organizations. It said that the frequent engagement between industry and government is "not surprising" given the size of the sector and the regulations to which it is subjected.

Chevron Canada said its policy is to comply with all laws and regulations and that it believes "participation in the political process is an essential part of corporate citizenship," while Teck said the company’s political contributions are "reported in an open and transparent manner." The Canadian Energy Pipeline Association (CEPA), which the report names as one of the top 10 lobbying groups, said it meets with a "wide range of stakeholders" and complies with all reporting requirements.

Coleman's office directed questions to the BC Liberal Party, which—along with other companies and the premier's office—did not return requests for comment before press time.

In total, 48 fossil fuel companies and industry groups donated over $5 million to the two parties, with the lion’s share, or 92 per cent, going to the BC Liberals between 2008 and 2015, the report found.

The top 10 lobbying firms also reported close to 20,000 lobbying contacts with B.C. public office holders, states the report, between 2010 and 2016.

Meanwhile, Coleman was the most lobbied public office holder examined, with 733 reported contacts by the top 10 most active lobbying firms, and Premier Clark came in second at 618 contacts. "This amounts to an average of nearly three contacts per week for Coleman alone," the report reads. Asked for comment, ministry spokeswoman Lindsay Byers said "this request should be sent directly to the Liberal Party headquarters."

B.C. has pursued the development of a liquified natural gas industry “with remarkable single-mindedness,” noted Daub. The report’s findings, she said, demonstrate that “the influence gained from donation and lobbying activity is playing out broadly in terms of a policy alignment between industry and the provincial government.”

Specifically, she pointed to the report’s finding that CAPP and CEPA “are central to the network of lobbyists and are far more active than other resource and manufacturing associations in the province.” CAPP made 1,848 actual and expected contacts in the six-year period with ministries, agencies, cabinet ministers and members of the legislative assembly (MLAs).

CAPP reported 201 expected lobbying contacts with government ministers and agencies from October 2015 to August 2016 in relation to the 2016 Climate Leadership Plan, analysis shows. Environmentalists condemned that plan as "full of holes," National Observer has reported.

"The oil and natural gas sector is the largest private capital investor in the Canadian economy and is amongst the most highly regulated industries in Canada," wrote CAPP spokeswoman Chelsie Klassen in response to questions about the report.

"Taking into account the economic significance and the high standards that regulate the sector, the frequent engagement between industry and government is not surprising. CAPP provides advice on matters relating to our industry to many stakeholders."

She said CAPP attends events "for parties of all political stripes in B.C.," and that "the frequency of party-hosted events often correlates with the amount of party funding being received by CAPP or any other organization."

CEPA spokeswoman Leanne Deighton said the group meets "with a wide range of stakeholders including government, and we comply with all reporting requirements on the association's lobbying activities."

Within the powerful coterie of the seven firms, two in particular stand out.

Teck Resources and Encana, the report indicates, contributed nearly half, or 48 per cent, of total political donations tracked.

Vancouver-based Teck, one of the world’s top exporters of steelmaking coal with six operations in Western Canada, led the way in political contributions, sending over a million and a half dollars ($1,502,444) to the BC Liberal Party in this time period and $60,090 to the provincial NDP.

Encana, a Calgary-based oil and gas company, came in second, giving $896,466 to the Liberals and $63,775 to the NDP. Teck and Encana "rank among the top 10 most profitable Canadian fossil fuel corporations" as of 2014, based on US revenue, the report states. This was before a global plunge in the price of oil, which hammered most of Canada's fossil fuel companies, causing significant financial losses and tens of thousands of layoffs.

Encana and Teck both appear among the report’s top 10 “fossil fuel industry” actual and expected lobbyists from 2010 to 2016. The province requires reporting who was lobbied as well as who is expected to be lobbied. Encana had 2,265 of these contacts during this period, the fourth-highest, while Teck had 1,538, the seventh-highest.

Encana was among the companies that did not immediately respond to questions from National Observer.

Teck also raised an eyebrow to the report’s description of the firm as part of the “fossil fuel industry.” Teck is a diversified mining company, noted Stannell, producing copper, zinc and steelmaking coal.

“Teck is considered primarily a mining company, and our steelmaking coal product is not used as a ‘fuel,’” wrote Stannell.

The CCPA report was co-authored by Daub along with University of Victoria doctoral candidate Nicolas Graham and sociology professor Bill Carroll.

Daub and Carroll are also co-directors of the Corporate Mapping Project (CMP) that produced the report along with the CCPA. The project is an initiative that investigates the fossil fuel industry in Western Canada.

National Observer's Linda Solomon Wood and Jenny Uechi are both community advisors on the CMP.

The project is funded by the Social Sciences and Humanities Research Council and hosted by the University of Victoria and led by that university, the CCPA and the Parkland Institute, as well as 11 other partners.

By Wes Regan | Opinion, Energy | May 2nd 2016
Reports from the Race to a Safer World