Vancouverites are paying more than enough to keep their public schools open, but the Clark government is redirecting the money to private schools.

In 2015, Vancouver taxpayers gave the province more than half a billion dollars to fund public schools for the year. As part of the property tax, homeowners pay a "school tax levy" fill provincial education coffers. Because of Vancouver's soaring real estate prices, the city paid $519 million in 2015 — but got only $440 million back to pay for public schools.

Vancouver School Board (VSB) faces a $24 million budget shortfall this year (its 11th shortfall in a row). The problem isn't limited to Vancouver: cuts totalling more than $81 million are affecting schools in 28 districts across the province, including Kamloops, Abbotsford, Surrey, Prince Rupert and Prince George.

The issue has sparked outrage from parents across the municipality.

"[Public education] is one of the most sound investments government can make in its democracy," said Farah Shroff, a mother of two children enrolled in a VSB school this year. Shroff said she said can't understand why B.C. would withhold funding from public education, even as the province posted a surplus.

Every year, the provincial government charges school taxes to B.C. homeowners to fund school board budgets across B.C., and with the soaring price of Vancouver real estate, the city shores up a disproportionate share. 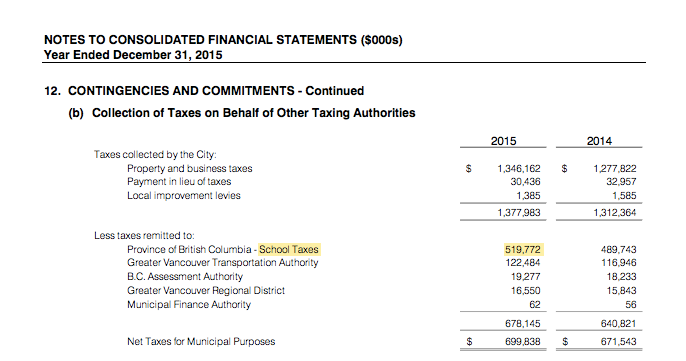 From City of Vancouver 2015 Statement of Financial Information. Figures shown in millions.

It's all based on a provincial funding formula designed to ensure equal opportunity for students across the province, irrespective of the tax contributions of their communities. While she doesn't dispute that the "have" districts should share funds with the "have nots," Shroff said Vancouver's schools have been suffering from underfunding for years.

This year, Clark's government announced a budget surplus of nearly $400 million for 2016, but the money hasn't trickled down into public education.

“In a year when the government is declaring a surplus, it's time to invest in public education if the system is experiencing budgetary shortfalls," explained Shroff, an adjunct professor of population and public health at the University of British Columbia.

If the provincial budget surplus can't contribute to keeping the administrative staff at her children's school employed, she added, what about a portion of the city's skyrocketing real estate taxes?

"[Premier Clark] and the education minister always fall back on the 'well, it's a local decision' comment regarding specific school closures. But they are leaving boards very few options given the 95 per cent capacity requirements in order to get seismic upgrade funding," she said.

The Ministry of Education said in January that large public schools won't get seismic upgrading funds until they can prove 95 per cent capacity, which some parents say puts children in danger.

According to a recent poll from Insights West, more than 60 per cent of B.C. respondents think the provincial government is to blame for this shortfall and its consequences, while one in four blame the VSB. One of the only groups more likely to blame the VSB however, are BC Liberal voters in 2013, it found.

"Salt in the wounds"

There's no denying that the entire province is facing an education funding crisis, Bacchus said, but Vancouver feels the burn in a different way because of how much it pays in school tax.

"It rubs salt in the wounds when our taxpayers are contributing more," she explained, "through a levy that is only supposed to make up part of our education budget."

The B.C. Education Ministry was called for comment earlier this week and has not yet responded. Vancouver East NDP MP Jenny Kwan however, suggested that there's something wrong with the ministry's funding formula if the VSB is consistently underfunded and could resort to reducing literacy programs for vulnerable students as a result of Liberal penny-pinching.

"It is Christy Clark’s choice where she wants to invest taxpayers' money," she told National Observer from Ottawa. “We have the poorest riding in the entire province and a great number of families and children who are in great need.

"We have the highest urban Aboriginal community as well, yet our funding is deficient to ensure that every single student has equal opportunity to succeed. How is it that Vancouver is constantly at the losing end — the short end of the stick — when our school tax far exceeds the amount we’re getting back to support Vancouver students?"

Kwan said the funding formula needs to recognize the complexity of Vancouver classrooms and adjust accordingly.

Every school board is required by the province to pass a balanced budget every year, and the VSB's rejection last week caused a tense standoff between the board and B.C. Education Minister Mike Bernier, who confirmed he would be willing to fire trustees for continually refusing cuts.

The board — responsible for roughly 54,000 students at all grade levels — has until June 30 to pass a balanced budget.

I find it odd the BC tax

I find it odd the BC tax payers are paying more and more for private schools that only the rich can afford to send their kids, shouldn't our tax paying dollars go to the public schools and not for the financially well off families?

Every dollar we spend on

Every dollar we spend on Christy's kid in private school is one less for your kid in public school.
That's the arithmetic I learned in school.
Christy learned a different arithmetic.