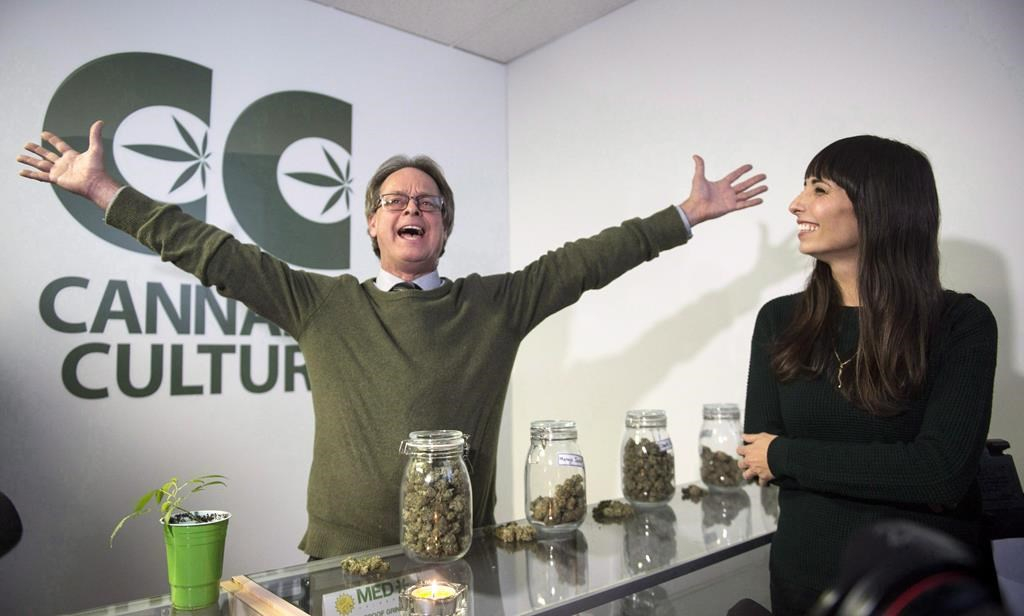 Marc and Jodie Emery, who own the Cannabis Culture brand, at the opening of one of their pot stores Thursday, December 15, 2016, in Montreal. The two have been arrested in Toronto. Photo by Paul Chiasson/Canadian Press
Previous story
Next story

Prominent marijuana activists Marc and Jodie Emery have been arrested in Toronto and police are raiding several pot dispensaries associated with the couple.

The couple own the Cannabis Culture brand, which is used by a chain of 19 marijuana dispensaries in British Columbia, Ontario and Quebec.

Police were seen raiding Cannabis Culture stores in several cities on Thursday. Vancouver police said its officers were carrying out search warrants in the city to help Toronto police with an investigation.

Toronto police said in a release that 11 search warrants were being executed in Toronto, the Hamilton area and Vancouver as part of a project targeting marijuana dispensaries. They said details on charges would be posted when available.

Marc Emery, the self-styled "Prince of Pot," was arrested at one of his new Montreal dispensaries in December and charged with drug trafficking.

Police forces across the country have been raiding pot shops in recent months and charging owners with trafficking-related offences.

In all of the discussion

In all of the discussion about legal or illegal and what if anything should be done to those providing marijuana to their communities, mention about the powerful healing effect of this herb is missing. Given how much pain and suffering it can alleviate and the diseases it can dispense with while lacking side effects (other than a high if you take too much which quickly passes) I wish there was a way to teach the helpful sides rather than continue to waive the illegal flag. I wish there was always a statement about its usefulness with health issues with every article on legal issues.
The public has been sold a bill of goods regarding the health component of marijuana. Sadly, this situation feels very much like bottom line corporate politics directing laws and the wording of laws. If corporations can't make money because they cannot patent the plant, then I guess they must think to at least pre-empt the public learning how helpful this plant is medicinally. Once people start using marijuana as a medicinal herb, a lot of other medicines are no longer needed.
I know not everyone agrees with this perspective, and until I read a ton of scientific research papers I didn't either. Now, I do know of its healing power. The medical profession should be supervising our use of this medicinal herb, guiding us to doses that include information about the potencies, ratios, and frequencies. Instead, now, there are people in their 50s to 90s who have never used marijuana going to dispensaries to try to figure out what they should take for their pain or ailment. Seems like a negation of doctors, pharmacists and other medical practitioner oaths and duties.
Yes, there are medical ways to get it legally, if your doctor is open to it. Bringing this topic up with their doctors can seem almost more scary to many elderly than just going to the local shop where they don't feel like they are a criminal, getting advice and purchasing.