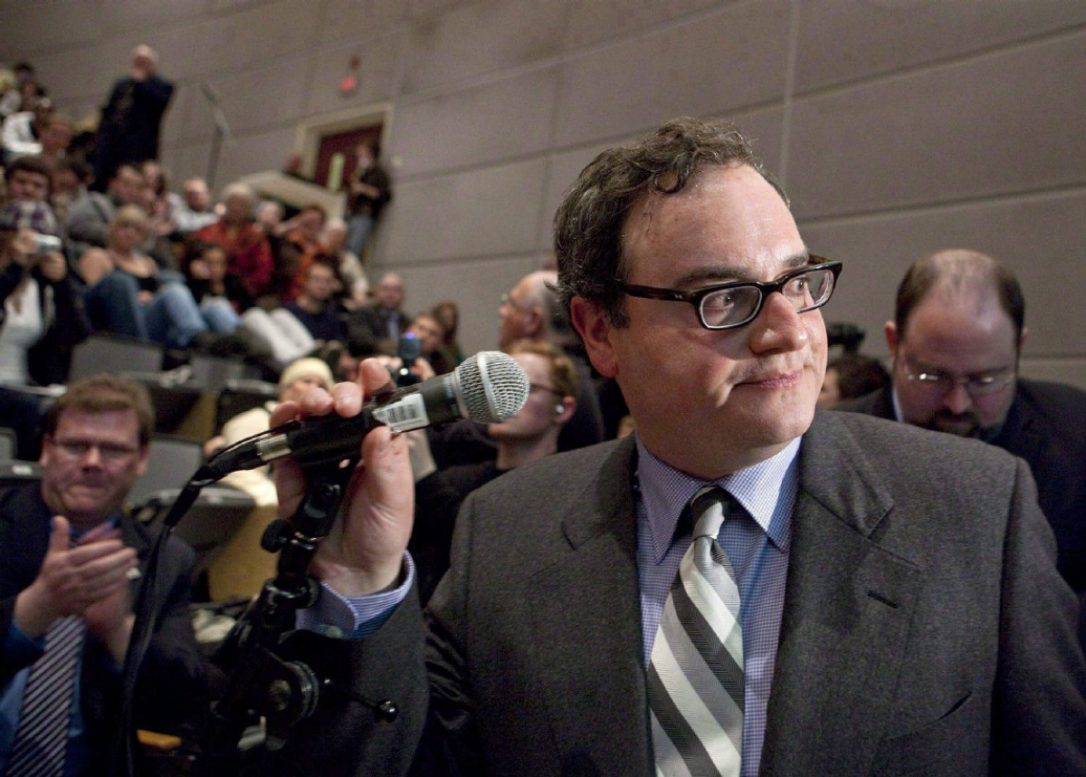 The Rebel founder Ezra Levant, shown here in this 2010 file photo, is standing by a contributor behind a video entitled "10 Things I Hate About Jews." Photo by the Canadian Press.
Previous story
Next story

The Rebel, a Canadian online media organization which spreads racist, anti-Muslim rhetoric, is standing by the contributor behind a video published this week entitled “10 Things I Hate About Jews.”

The video, which was filmed in Tel Aviv and posted on Tuesday, features Rebel commentator Gavin McInnes running down a list of things he hates about “the Jews,” occasionally affecting a caricatured Israeli accent.

The rant has been strongly denounced by many, including federal Conservative Party leadership contender Chris Alexander, who appeared at a Rebel Media event in Toronto at which some participants were photographed doing what appeared to be Nazi salutes. Alexander wrote on Twitter that he would not attend any more of the organization’s events. “McInnes’ statements are ‘repulsive and disturbing.’”

In the video, McInnes complains about what he describes as bad food and poor driving – “You drive worse than Chinese women,” he said. He calls Hebrew “spit talk” and said the “whole language is clearing your throat,” before getting to what he calls “the constant kvetching” from Israelis about historical persecution of Jews.

“There’s this overall sort of whiny, paranoid fear of Nazis that is making them scared of Christians and Trump, who are their greatest allies,” McInnes said in the video.

He complains that Jews aren’t thankful enough for the role of Americans in defeating Nazi Germany. “America saved the day, the Western world saved the day, had your back, liberated you. Sorry we didn’t do it in time, but we still saved you,” McInnes said in the video. “It’s like a black guy going ‘Yeah, white people did slavery.’ Well, they didn’t start it, but they ended it. So maybe be a little more positive about it?"

The video is part of a series of reports produced by Rebel contributors during a recent trip to Israel.

The title of the video has been changed on the Rebel’s website to “10 Things I Hate About Israel,” but the content of the video is the same. In an email, Rebel Media founder Ezra Levant said that he decided to change the title: “I thought ‘Jews’ was more provocative, but ‘Israel’ was more descriptive,” Levant said.

He retweeted the video with the original title on Tuesday, shortly after sending a tweet linking to a Rebel report on “anti-Semitic hate” from a Canadian imam.

Levant said he didn’t think the “10 Things I Hate About Jews” video was anti-Semitic. It was meant to be humorous, he said, and the “entire shtick could have been delivered by a comedian in Tel Aviv.”

Levant also said that McInnes “is not a Holocaust denier. I just spent a week with him in Israel. I’d call him a bit of a Jew-lover.”

Another video released on March 11 as part of an online American talk-show McInnes hosts showed him talking about how spending time in Israel has led to him “becoming anti-Semitic.”

“God, they’re so obsessed with the Holocaust. Yes, I know it was bad – don’t get me wrong, I’m not pro-Holocaust,” McInnes said in the video. “It’s a strange thing. It’s like a liberal thing, it’s arguably a white thing, but it’s a Jewish thing to sort of dwell on the past. And this whole nation-state, they talk about ‘75 years ago, my people were killed,’” he said, again affecting an attempt at an Israeli accent. “I don’t know if it’s healthy to dwell.”

Racists, neo-Nazis and anti-Semites enthusiastically embraced McInnes’ video. In a tweet responding to that video on Saturday, Richard Spencer, an American neo-Nazi, described McInnes as a “straight shooter.” David Duke, the former leader of the Ku Klux Klan, also tweeted the video, and Daily Stormer, a neo-Nazi website, described McInnes video as “unexpected. But fantastic,” as well as “on-point and awesome.”

Some, including commenters at the Daily Stormer, turned against McInnes after he released a video disavowing their support and arguing that the earlier video had been taken out of context. “No offence, Nazis, I don’t want to hurt your feelings, but I don’t like you – I like Jews,” McInnes said in the later video.

“After Gavin’s video on Sunday, in which he clarified and corrected himself for comments made on a U.S. channel, the racist right renounced him,” Levant said.

McInnes hasn’t always been known for attracting praise from racists: he was one of the co-founders of Vice Magazine, but stopped working with the company in 2008. Almost none of his work for the magazine remains online.

After leaving Vice, he started Rooster, an ad agency and production company, but left in 2014 after he posted an article online entitled “Transphobia Is Perfectly Natural.”

I am speechless. This article

I am speechless. This article reeks of ignorance and extreme disconnection from reality. "God, they’re so obsessed with the Holocaust. Yes, I know it was bad – don’t get me wrong, I’m not pro-Holocaust,”
Is this actually spoken by an ADULT and was PUBLISHED??? The Holocaust is not an ISSUE that you can have an opinion on, be "Pro" or "against", like abortion or legalizing pot. It was a REAL HORRIFIC PERIOD in history that showed the darkest depths that humanity can sink to. Maybe instead of kvetching about the Jews, this guy should try listening to holocaust survivors, maybe he'd learn something.