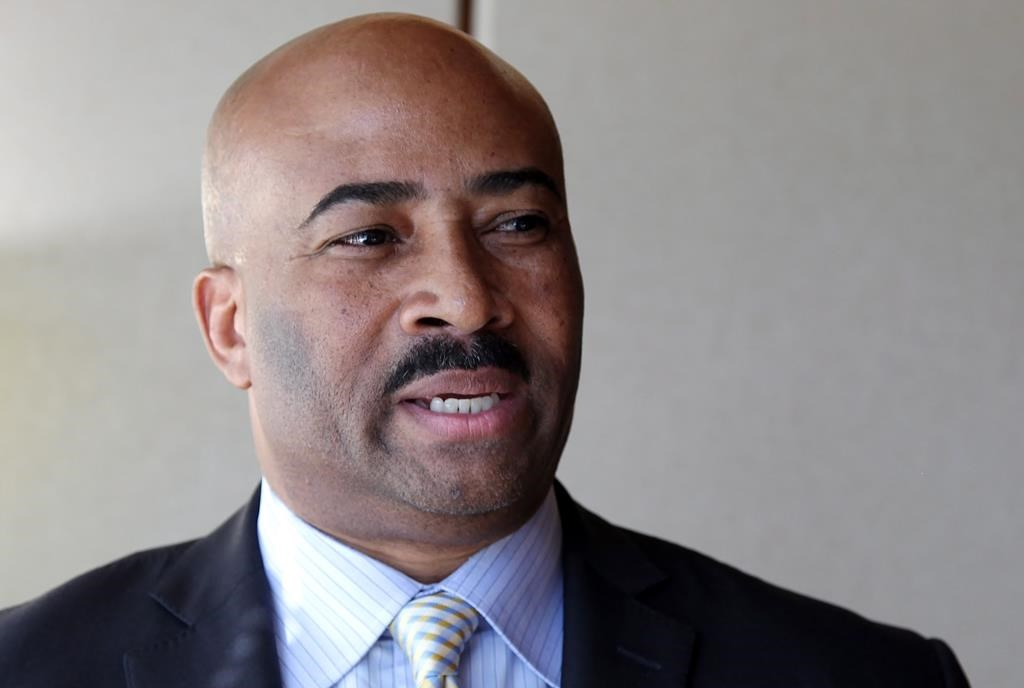 Embattled Sen. Don Meredith is seen in his Toronto lawyer's office in downtown Toronto on Thursday, March 16, 2017. Photo by The Canadian Press
Previous story
Next story

Beleaguered Sen. Don Meredith's new lawyer said he hoped to temper the intense emotions unleashed by an ethics report on his client's affair with a teenager, adding the race card is now off the table.

In an interview with The Canadian Press, Bill Trudell said he had agreed to try to help the black senator, who is fending off widespread calls for his resignation in light of the damning account of his conduct with the young woman.

"I definitely am not going to try to assist Sen. Meredith or the Senate on the basis there's any racial prejudice involved in the alleged conduct or the decisions," Trudell said. "Some people may feel that. Some people may react, but I don't think that assists."

The prominent criminal lawyer said he agreed on Monday to help Meredith, 52, after meeting him for the first time on the weekend. The lawyer said it's obvious the senator, who said he has taken sick leave on doctor's orders, is under enormous stress.

While people are understandably furious over the politician's behaviour, Trudell called for calmer voices to inform the debate raging inside the Senate and across the country on Meredith's future.

"I'm hoping to turn the temperature down here," Trudell said. "There's a lot of people saying things and calling for his resignation or prejudging. I just don't think that helps."

The Toronto-based lawyer said he wanted to curb the "emotional contagion" and find a proportionate response to what the politician did.

The senator has spoken publicly only once since the report from the Senate's ethics officer came out earlier this month — repeatedly apologizing for his "moral failing" and begging forgiveness. He also told The Canadian Press that "absolutely, racism has played a role" in the furor that could cost him his job of six years.

While the upper chamber wants to deal with the issue quickly, Trudell noted he had just taken on the case and was still getting up to speed on the constitutional issues involved. As such, he said he hoped the Senate's ethics committee would give him time to allow for his constructive involvement and his client's health to improve.

"I have a great deal of respect for the Senate — I've appeared there many times — and I'm expecting them to give me a bit of time to assist in responding," Trudell said. "I don't think snap decisions are good for anybody."

The lawyer said no one has any intention of throwing up road blocks as the committee does its job before reporting to the Senate, which will ultimately decide whether it should try to boot Meredith amid questions about whether it has the power to do so or take some other action.

On Wednesday, the Senate's ethics committee met behind closed doors to discuss potential sanctions that range from a reprimand to outright expulsion.

Conservative Sen. Raynell Andreychuk confirmed the committee had been in touch with Meredith's counsel, saying the panel had an obligation to give the senator a "reasonable opportunity" to speak. However, the committee itself said in a release that Meredith has had an opportunity to appear in person or testify by video conference or in writing.

Earlier this month, Senate ethics officer Lyse Ricard concluded the married Pentecostal pastor had improperly used his position to lure a "vulnerable" 16-year-old teen into a relationship that became sexual. Meredith told The Canadian Press last week that Ms. M was not underage, he had done nothing criminal, and his mistakes were human.

During that interview, Meredith's former lawyer Selwyn Pieters said his client was being unfairly portrayed as a "sexual predator" because he's an imposing black man.

Trudell said he didn't think that approach would be helpful going forward.

"I see a huge mistake by an otherwise good man," Trudell said of Meredith's misconduct.

Pressure mounts on Sen. Don Meredith to resign over sex relationship with teen