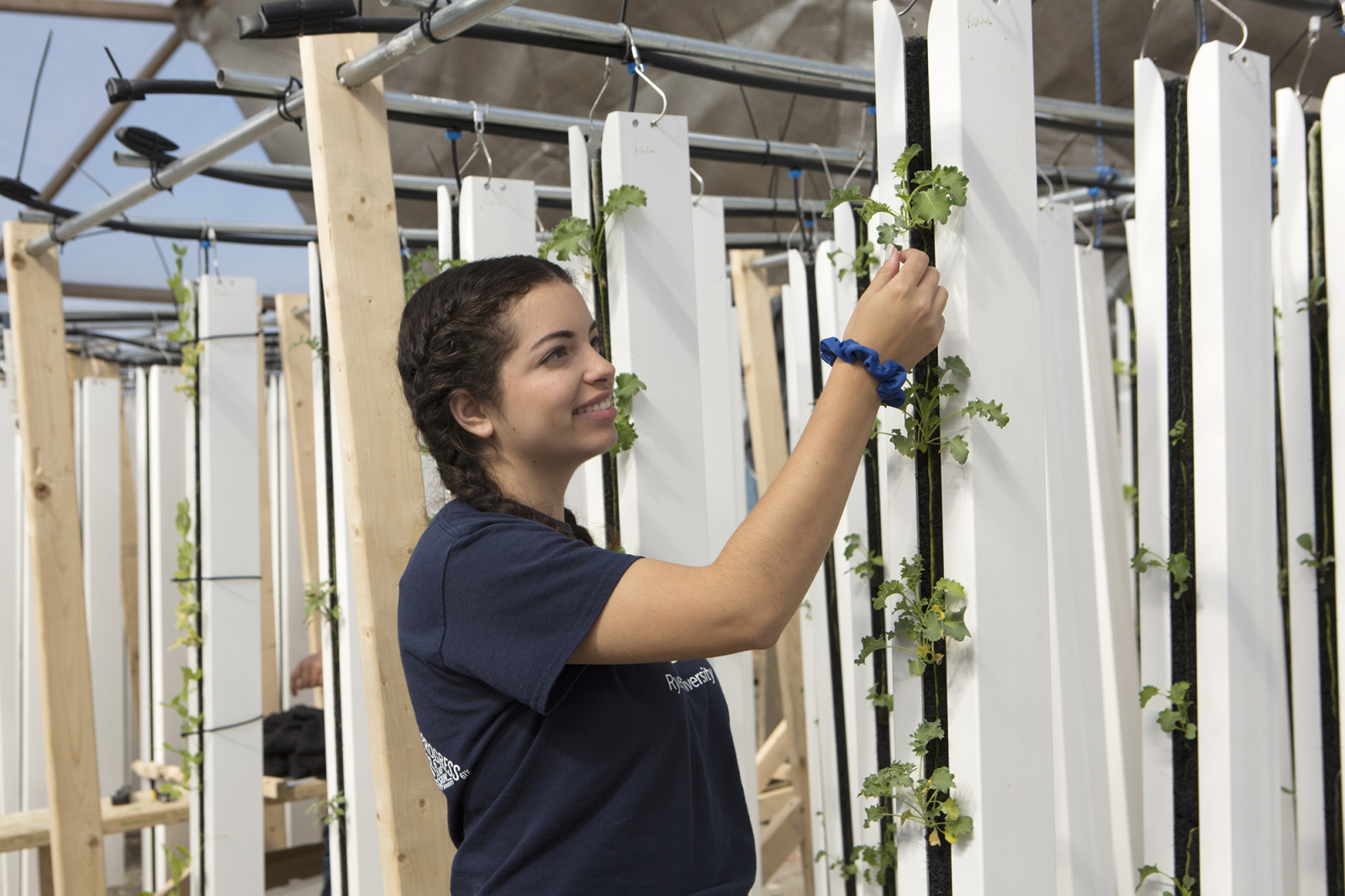 Stefany Nieto, a co-founder of Growing North, in the group's first greenhouse in Naujaat, Nunavut. Photo by Growing North
Previous story
Next story

Fresh, locally grown kale, at the edge of the Arctic Circle? A Ryerson University student project is proving it’s possible to grow vegetables in a part of Canada where almost nothing green can survive.

Produce is usually shipped to Canada's northern communities by air, truck or barge, depending on the season. A greenhouse built by the Growing North project enabled the Inuit community of Naujaat, Nunavut, for the first time, to produce their own fresh produce grown right at home at the edge of the Arctic Circle. It was enough for half of the 1,000-person community to eat vegetables every day.

“Here, we always have to force kids to have their vegetables. When we go up north, it’s ‘Can I have carrots? Can I make kale chips?’” said Nieto, who started Growing North with fellow Ryerson student Ben Canning in Toronto in 2014. She said they took on the project after learning about the high levels of food insecurity facing residents of the far north.

“I had seen food insecurity around the world in developing nations … That’s how it was framed in my head. It can’t be something in Canada,” she said. "When I learned of the food insecurity facing Northern Canada, I was shocked."

In Nunavut, a kilogram of potatoes can cost almost $13. A Ryerson University-based project aims to tackle food insecurity in the territory and cut grocery bills in half. Video by Riley Sparks

Many Toronto consumers were stunned last year when a bad growing season in California and the weak Canadian dollar drove the cost of a single head of cauliflower to as much as $8 – but that’s a deal compared to everyday prices in Nunavut, where people often pay as much as three times more for groceries than other Canadians.

Nieto said that the greenhouses could cut the average cost of vegetables in half – a huge saving when a kilogram of carrots costs on average almost $7 and a kilo of potatoes almost $13.

Those high grocery bills can mean some families go hungry and struggle to eat healthily. A recent University of Toronto study found that 60 per cent of children in Nunavut live in homes facing some type of food insecurity – meaning they don’t always have enough to eat, or worry about running out of food.

Inside the 13-metre-tall, dome-shaped greenhouse in Naujaat, rows and rows of hanging vegetables are fed by a hydroponic system. Just four hours of sunlight per day heat the inside of the greenhouse up to 30 degrees Celsius warmer than the air outside.

One of the community favourites: baked kale chips, made from the town’s first-ever locally grown kale. Nieto said she recently found out that some people loved the chips so much that they’ve hoarded bags since last summer, rationing the chips as a winter treat until the next harvest.

In the summer, the greenhouse is almost entirely self-sufficient, except for a small amount of electricity to run a water pump for the hydroponic system.

For kids in the community, vegetables are an exciting change. But they’re just as important to their parents, Nieto said. “They want to provide the best that they can for their children, and they know that a healthy start is very important, so being able to actually have local, fresh and affordable produce is a relief for them,” she said.

Last year, the group ran a school co-op program with grade nine students, who got school credit for helping to build the greenhouse and learning how to grow vegetables – everything from planting to checking water and PH levels and harvesting. They’re hoping to expand that program to include grades 10-12 this fall.

Some of those co-op students are now helping to run the greenhouse. “That was our main goal. We wanted to build with the community, not for the community,” Nieto said.

Apart from the obvious practical problems with growing food in the Arctic Circle, Nieto said they ran into another unexpected challenge: because of the climate, few in the community have any experience with growing vegetables. “It was very new, it was very experimental and it was very difficult at first,” she said.

Conquering that was a thrill for many of Naujaat’s new horticulturalists, she said: “That’s probably one of my favourite memories … seeing the excitement: ‘I grew that, I’m responsible for that.’”

But because of the harsh climate, so far, they’ve only been able to grow for six months of the year. Naujaat has just four months where the average daily temperature is above zero, hitting a maximum of just 13 degrees Celsius in July, the hottest month. To change that, the group is now working on a design that would burn used coffee grounds to produce heat and light, allowing food production all year.

This summer, Growing North plans to build two new greenhouses in Nunavut’s second-largest community, Arviat, which is on Hudson Bay, north of the border with Manitoba. Two greenhouses should provide enough fresh vegetables for half of the community of about 2,600 people to eat vegetables every day.

The first greenhouse, which was assembled from parts shipped to Naujaat, cost $160,000. Refinements to the design should bring the cost down to an estimated $95,000 for the next version, Nieto said. There’s also an annual cost of $17,000, which includes a salary for the greenhouse manager.

Last year’s harvest was distributed free of charge to the community. The group is now working on deals with the Naujaat’s two grocery stores to sell the next harvest.

So far, Growing North has relied on grants and donations, but they estimate that with four greenhouses working at full capacity and selling crops, the group could be financially self-sufficient and able to invest profits in expanding into other communities in the North.

People from communities from as far away as Norway, Greenland and Kenya have called to ask about the project, but Nieto said they’re hoping to be able to bring the greenhouses to communities across northern Canada, where food insecurity is most severe, before moving further abroad.

Wow! This is a great story

Wow! This is a great story on many levels. First, at a individual and practical level: It is an encouragement for all of us to sow a few seeds even in a pot on our windowsill or in a piece of our yard or even our whole yard. Second, at a national level it illustrates another way that small business innovations can be sold to the world, this one to those in the northern latitudes. Also, at a national level it opens our understanding to the lives of our fellow citizens close to the Arctic Circle. Third, it is a triumph of education: Stefany Nieto and Ben Canning have illustrated the quintessential result of an education: identifying a problem and then working to find a successful solution. Thanks