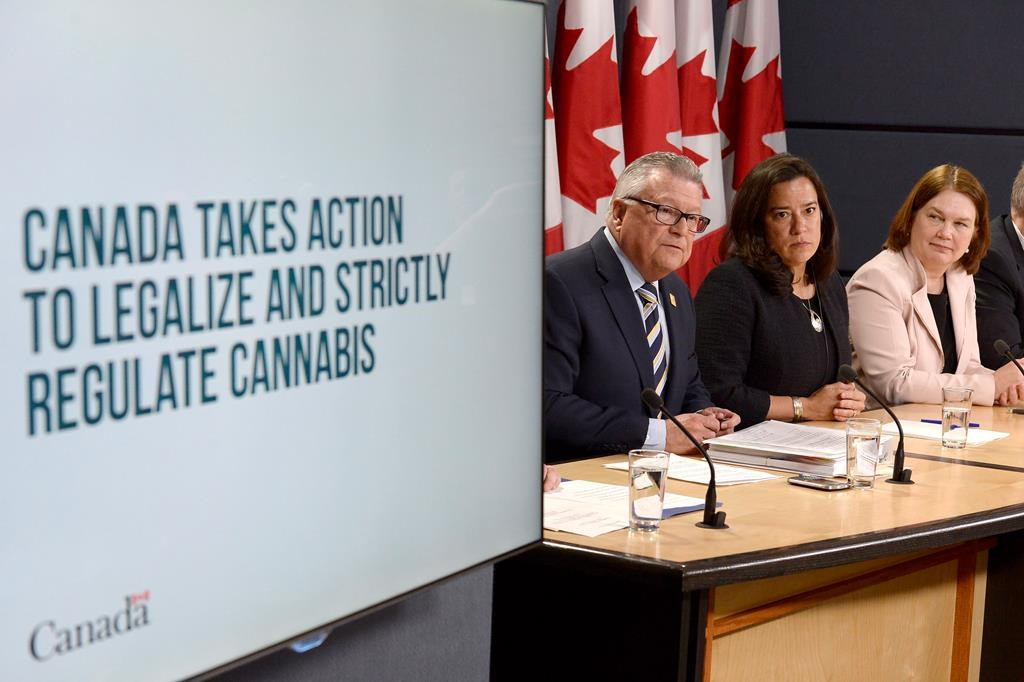 The federal government is steering Canada into a bold and risky social experiment with proposed new laws legalizing recreational marijuana for those aged 18 and older — and stringent new criminal sanctions for those who break them.

The bundle of bills tabled Thursday in the House of Commons marks the start of a lengthy process which, once complete in July 2018, will usher in a dramatic cultural change, its ramifications reaching into nearly every aspect of Canadian society.

Since the 2015 election campaign, the Liberals have couched their push to legalize pot in a counterintuitive message: that it is the single best way to keep the drug out of the hands of impressionable and still-developing children.

The long-standing prohibition on pot in Canada has been an "abject failure," with police forces spending upwards of $3 billion a year trying to stamp out cannabis use among some of the heaviest users in the western world, said Public Safety Minister Ralph Goodale.

Criminals on the black market are the ones profiting from the current system, to the tune of anywhere from $7 billion to $8 billion a year, Goodale said.

In short, he said: "We simply have to do better."

Bill Blair, the ex-Toronto police chief turned Liberal MP, said the objective is not to promote the use of pot, but to allow its safe, socially responsible use through the mechanism of legislation and strict regulation.

Another objective that became clear Thursday: impose significantly more rigid laws to combat impaired driving in all its forms, be it alcohol or drugs.

The legislation, once passed, would allow police to use what she called "oral fluid screening devices" to check for marijuana impairment, while also creating brand new driving offences for those caught driving while impaired by pot.

Police would be able to demand a saliva sample if they have "reasonable suspicion" a driver has drugs in their body; a positive test result would then help officers identify "reasonable grounds" to demand a blood sample or further drug evaluation.

"I am confident of the constitutionality of the mandatory road side testing," Wilson-Raybould said.

"This is not a device or a tool that does not exist in other places in the world. In fact, mandatory roadside testing in many countries has significantly reduced the number of deaths on our highways."

Ottawa is leaving it up to the provincial and territorial governments to prescribe rules for retail environments, including whether marijuana can be sold alongside alcohol, as well as to properly regulate and distribute the drug.

That means the challenge now before the provincial and territorial governments is nothing short of monumental.

"I think that if we get it right, it can work," said Alberta Premier Rachel Notley.

"I also know that there is a lot of heavy lifting to be done to get there ... One of the things we know, for instance, is that it's not the cash cow that people think it is and there are a lot of costs associated with it."

Opposition reaction Thursday ran the gamut: the Conservatives shook their heads at what they are convinced is a bad idea, while the New Democrats wondered what took so long.

"I have to ask myself why this bill wouldn't have been tabled six or 12 months ago," said NDP health critic Don Davies, noting the challenge now before the provinces.

"How much is legalization going to cost?" he said. "Does he intend on downloading this entire thing for implementation and enforcement?"

One that dominated the conversation Thursday touched on how the changes could impact the country's relationship with the U.S., and what sort of administrative stress Canadians can expect at the border.

Canada has been in "very close touch" with the U.S. on the issue, said Goodale, but he had little to say about Canadians who might fear trouble from American border guards when travelling south.

"Every sovereign country has the ability at the border to make decisions for themselves," Goodale said.

"No one should lie at the border; in fact under the laws of both countries you are obliged to tell the truth when you're speaking to a border services officer."

A U.S. Embassy spokesperson, speaking on background, said while any changes won't impact the relationship between the two countries, Canadians still need to be cognizant of the law as it stands in the U.S.

"Currently, marijuana possession is against federal law in the United States, and U.S. Customs and Border Protection will enforce the law as appropriate," the official said.

"It is important that Canadians are aware of possible actions they may face upon attempted entrance into the United States if they possess or have residue of marijuana."

Exporting and importing cannabis will continue to be illegal, Goodale said. The government said resources required by the RCMP and the Canadian Border Services Agency will be provided to enforce the law at the border.

On the issue of packaging, the government's proposed bill suggests cannabis sales should not be allowed packages or labels that give reasonable grounds to believe it could be sold to young people.

It also bars packaging containing a "testimonial or endorsement" or that depicts a person, character or animal.

The legislation also includes a prohibition for producers packaging cannabis in a way associated with "a way of life" including glamour, recreation, excitement, vitality and risk.

The bill gives authority to set in place regulations for other specific areas such as font and colour, Philpott suggested Thursday, noting the government will take public health lessons from issues including tobacco.

Has the scientific groundwork

Has the scientific groundwork been done on the "too stoned to drive" number, the mg/L of THC in the blood? At what level are driving skills compromised? Will the levels of blood alcohol and THC be normalized to each other, e.g. the level of alcohol that slows reflexes by, (guessing), 20% be the criterion for alcohol then imply that a THC level that does the same would be the "over the limit" for that chemical.

I ask, because the evidence that THC impairs driving has always been kind of weak. Yes, people from car accidents often have THC found in the emergency room, but they generally also have alcohol, so the correlations are poor.