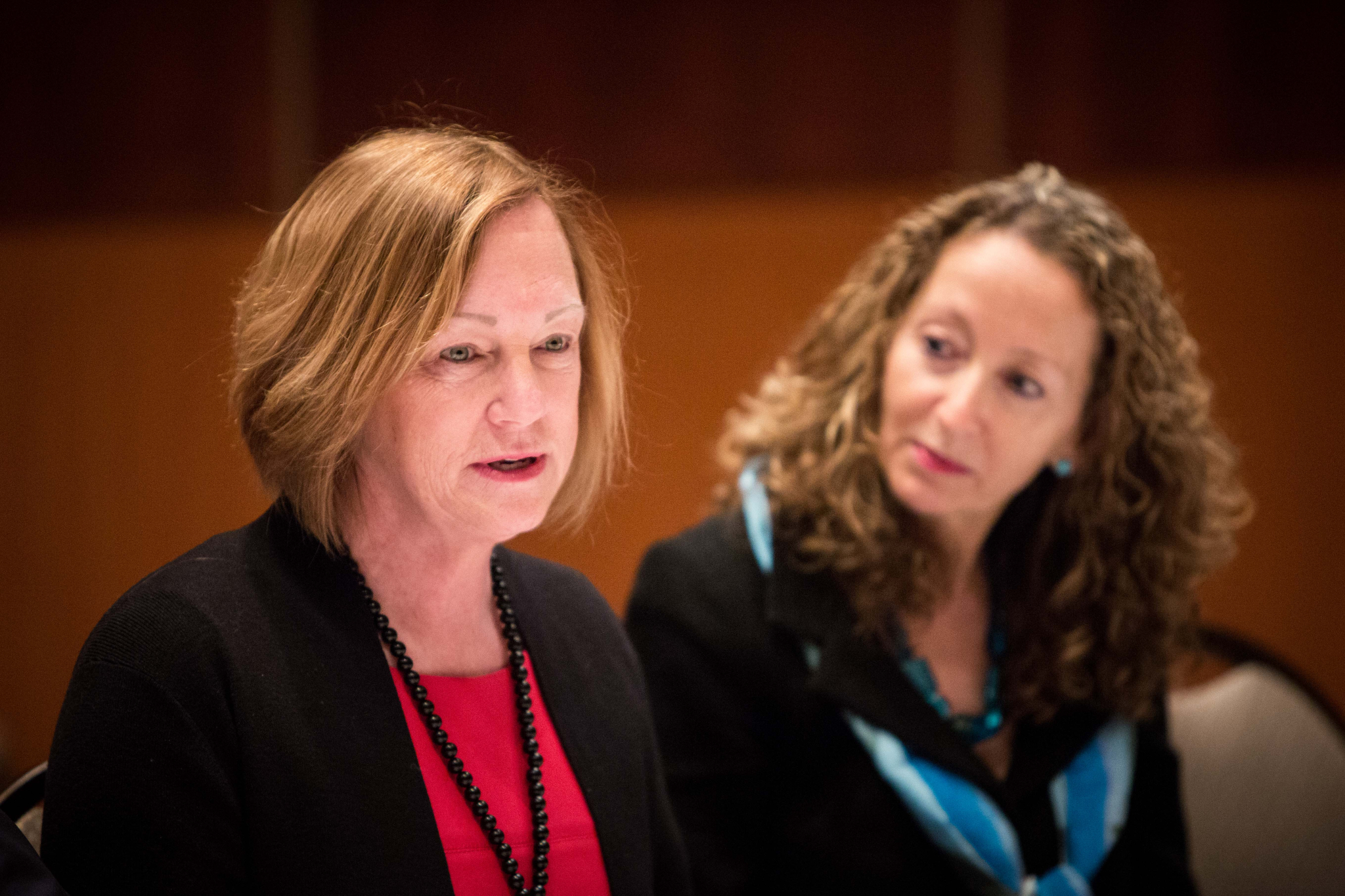 Former NEB executive Brenda Kenny (left) and Hélène Lauzon, co-chair of a federal NEB modernization panel, speak to National Observer on Feb. 22, 2017 in Gatineau. The panel recommended on May 15 to scrap the NEB. File photo by Alex Tétreault
Previous story
Next story

A panel of experts appointed by the Trudeau government is recommending the shutdown of Canada's scandal-plagued pipeline regulator.

In a groundbreaking 88-page report, the panel made 26 sweeping recommendations, including the replacement of the Calgary-based regulator, the National Energy Board (NEB), with a new Ottawa-based organization called the Canadian Energy Transmission Commission. It also recommended the creation of a new energy information agency.

The recommendations follow years of public criticism that the regulator, the NEB is biased and too close to the Calgary-based energy companies, which it is supposed to oversee objectively. They were based on feedback from nearly 200 people, with a special focus on indigenous voices, in 10 major Canadian cities, along with public feedback sent in online.

"Everywhere we were there was this issue with confidence, transparency, independence, safety and security... that was repeated constantly and that’s why we have to listen to them and make this major reform," said Hélène Lauzon, co-chair of the panel and a lawyer who presides over the Quebec Business Council on the Environment.

"They had this perception that the NEB was not impartial, that they were biased when they were generating their reports."

The panel said its recommendations would be consistent with emerging energy trends as new pipelines projects become "fewer and fewer in the future."

While a new energy regulator wouldn't necessarily need a change of mandate per se, it added, the regulator should operate under the assumption that Canada's new economy will include a greater emphasis on renewables.

The proposed commission would retain an office in Calgary and its expertise on pipeline safety in that city. But a new board of directors, support staff with other functions such as an expanded expertise on electricity transmission issues and communications officers would be added in Ottawa, panel members told National Observer in an interview on Monday.

A representative of the NEB said the regulator has not yet had time to review the recommendations thoroughly, but is open to the report's suggestions.

"Obviously, as an organization, we are looking forward to anything that helps makes us better," NEB communications officer Rebecca Tayor. "We're going to be taking a look at the recommendations, then it's going to be up to the minister to decide whether he implements any of them."

Prime Minister Justin Trudeau gave Carr a mandate to "modernize" the regulator in order to restore public trust in federal oversight of major energy projects, including major pipeline expansion proposals such as Kinder Morgan's Trans Mountain expansion and TransCanada's Energy East project. The government subsequently created the panel to consult with Canadians and study the issue.

Throughout a cross-country tour, members of the panel noted that questions about trust were raised often throughout their consultations.

Speaking with reporters in Ottawa on Monday, Carr said he thought its new recommendations were "thoughtful" and "really interesting."

"I’m thankful for their work," he told reporters on Parliament Hill. "Now the government will ask Canadians what they think, and with other reviews that are happening now, come the fall, we’ll meet together as a government and determine the modernization of the National Energy Board and environmental assessment in Canada."

Gary Merasty, a member of the Peter Ballantyne Cree Nation and a former Liberal MP was also a panel co-chair, said the recommendations were also made to improve the government's engagement with First Nations.

"More than any other group, the expectation of indigenous people is huge through these projects," he told National Observer. "What we’ve heard is that we need to ensure indigenous are involved at the earliest opportunity possible."

In addition to boosting the regulator's presence in Ottawa, the panel recommended introducing a new independent committee of public stakeholders, including indigenous representatives to be consulted on some of the ongoing operations issues of the new commission to restore trust in the oversight process. The panel also recommended a new ombudsman to deal with complaints.

At a demonstration on March 28, Montreal environmentalists called for a public inquiry into Canada's pipeline regulator. Video by Clothilde Goujard

Lauzon, co-chair of the panel, said they strongly advise the federal government to implement all 26 recommendations as a package, lest it risk leaving some areas of public concern unanswered. The recommendations are "realistic and feasible," she told National Observer, and work together as a unit.

Asked if the Trudeau government would implement all of the panel's advice, Carr appeared to be amused and chuckled.

“I’m reminded in another life, of when I wrote reports to government, and I was always very hopeful that each and everyone of my recommendations would be accepted," he told National Observer in a scrum.

The Canadian Energy Pipeline Association (CEPA), which represents the country's pipeline companies, was also cautious about commenting on the specifics of the report. In an email statement, spokeswoman Leanne Madder emphasized the importance of taking the necessary time to review the 88-page document thoroughly, in order to understand its impacts on the industry.

“CEPA recognizes there will be significant change to how the transmission pipeline industry is regulated, and how major pipeline projects are reviewed in Canada," she wrote.

"We also must consider how this report will link to, and integrate with the CEAA (Canadian Environmental Assessment Agency) Expert Panel Report that was released in April. We look forward to learning more on how the government will incorporate these recommendations going forward.”

In Alberta, Jason Kenney — leader of the province's Conservative Party and a former Harper-era cabinet minister — called parts of the report "absurd." He referred specifically to a recommendation that the review process for pipelines be extended from its current 15 months to a full three years.

"Only the ideological opponents of resource development think pipeline permitting should go slower," he tweeted on Monday afternoon.

Recusals in the midst of scandal

Over the years, the regulator has been targeted by fierce criticism from pipeline opponents who believe it overlooked critical indigenous, environmental, and scientific evidence in its recent reviews of the Kinder Morgan and TransCanada projects. It declined to permit cross-examination of evidence during the Kinder Morgan hearings, for example, and refused to grant intervener status to hundreds of concerned individuals and environmental groups.

In the case of the Energy East proposal, the entire panel assigned to review that TransCanada project was forced to recuse itself, along with the NEB's chief executive Peter Watson, due to the appearance of bias last September following revelations uncovered by National Observer in July and August.

At the time, National Observer revealed that Watson and other senior NEB officials had met privately with a representative of TransCanada, former Quebec premier Jean Charest, who gave them political advice about how to gain public support in Quebec for a new pipeline.

The federal government has spent at least $341,275 to move six top National Energy Board officials to Calgary. Video by National Observer

During an interview with National Observer in February, other members of the panel noted that one of the key problems they had identified was the NEB's close proximity to the headquarters of Canada's largest oil and gas companies in Calgary.

“This is something we have identified in terms of what we’ve heard," said Lauzon, a lawyer who presides over the Quebec Business Council on the Environment, in February. "The perception is that because the head office is in Calgary, this is one of the reasons people believe it’s too close to the industry. We’ve heard the word ‘captured’ by the industry.

The National Energy Board has a mandate to regulate the construction and operation of fossil fuel pipelines and power lines that cross provincial or international borders, as well as the imports and exports of natural gas, the export of oil and electricity and oil and gas exploration.

It is an arm’s-length, quasi-judicial tribunal that reports to Parliament via the natural resources minister.

The federal government is accepting public commentary on the report until June 14.

Editor's note: This article was updated at 3:15 p.m. on Monday with new comments from panel members and Natural Resources Minister Jim Carr.