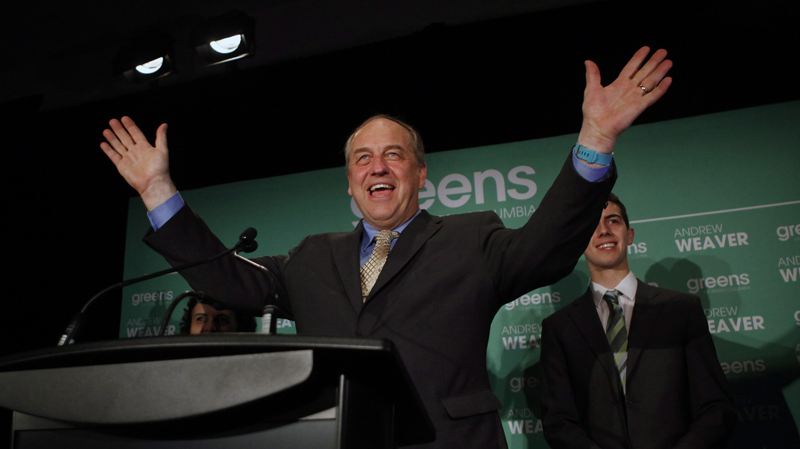 Andrew Weaver addresses his supporters in Victoria on election night. Photo by the Canadian Press.
Previous story
Next story

When I first met BC Green Party leader Andrew Weaver, he was speaking on the impacts of climate change at a conference I was also speaking at. As we chatted before his talk I was impressed with how strong—even bullish— he was towards other climate scientists that were putting forth more moderate climate scenarios. He saw the climate crises for the global emergency it is and he wasn’t pulling any punches.

Now, given our rather strange election outcome, it seems that the climate trajectory for the province I love is in his hands. One would assume I would feel deeply relieved, even celebratory, to have a climate scientist holding the balance of power. But I need reassurance.

Weaver has set three conditions for BC Green Party cooperation in a minority legislature: Party status for the Greens, banning big money, and electoral reform. The latter two conditions would definitely change B.C. politics, and would arguably exert a positive influence on environmental policy by reducing the stranglehold of resource companies over our politics. They would forge a greater link between British Columbians’ strong environmental values and actual seats in the legislature. And those things would be good.

But missing from the list of conditions so far is anything to do with climate change or the environment—which is somewhat odd considering the roots of the Green Party and the background of Andrew Weaver himself. So how can Weaver best use his new found power to get real change for the climate?

Christy Clark has done worse than nothing on climate change. She created a Climate Leadership Team which got lots of media coverage at its inception—but using that as cover, she then proceeded to reject every single recommendation that Team made. Worse, she stopped the planned escalation of the B.C. carbon tax, so its impact is weakening over time, instead of strengthening as intended.

This is bad for B.C. and bad for the world. We were one of the first jurisdictions on the globe to have such a tax in place and our success and failures are being watched and measured internationally. As our carbon tax becomes less and less effective, as this government erodes its basic design principles, the model proves less and less valuable. As one of the architects of Gordon Campbell’s climate policy, Andrew Weaver must be acutely aware of exactly how much progress has been squandered by Clark’s inaction.

Clearly working with the Liberals is not the best path for moving forward a green climate agenda. While Weaver has speculated that he may choose that path, it would squander the huge opportunity we have before us.

The NDP is far from perfect, but they have made important promises on climate and related issues like Kinder Morgan. They have in fact promised to implement all of the recommendations of Clark’s Climate Leadership Team – the same ones she refused to accept. While the NDP have a mixed track record on environmental policy, I get a sense that under John Horgan, they are genuinely wrestling with how to get it right.

As Andrew Weaver and his caucus know, we have no time to waste in stopping climate change. Their voters took a leap of faith and voted for change, and now they have a golden opportunity to deliver.

I hope they will do just that.

Karen Mahon lives on Cortes Island and is a life long environmentalist, past Managing Director of Greenpeace, current National Director of Stand.earth