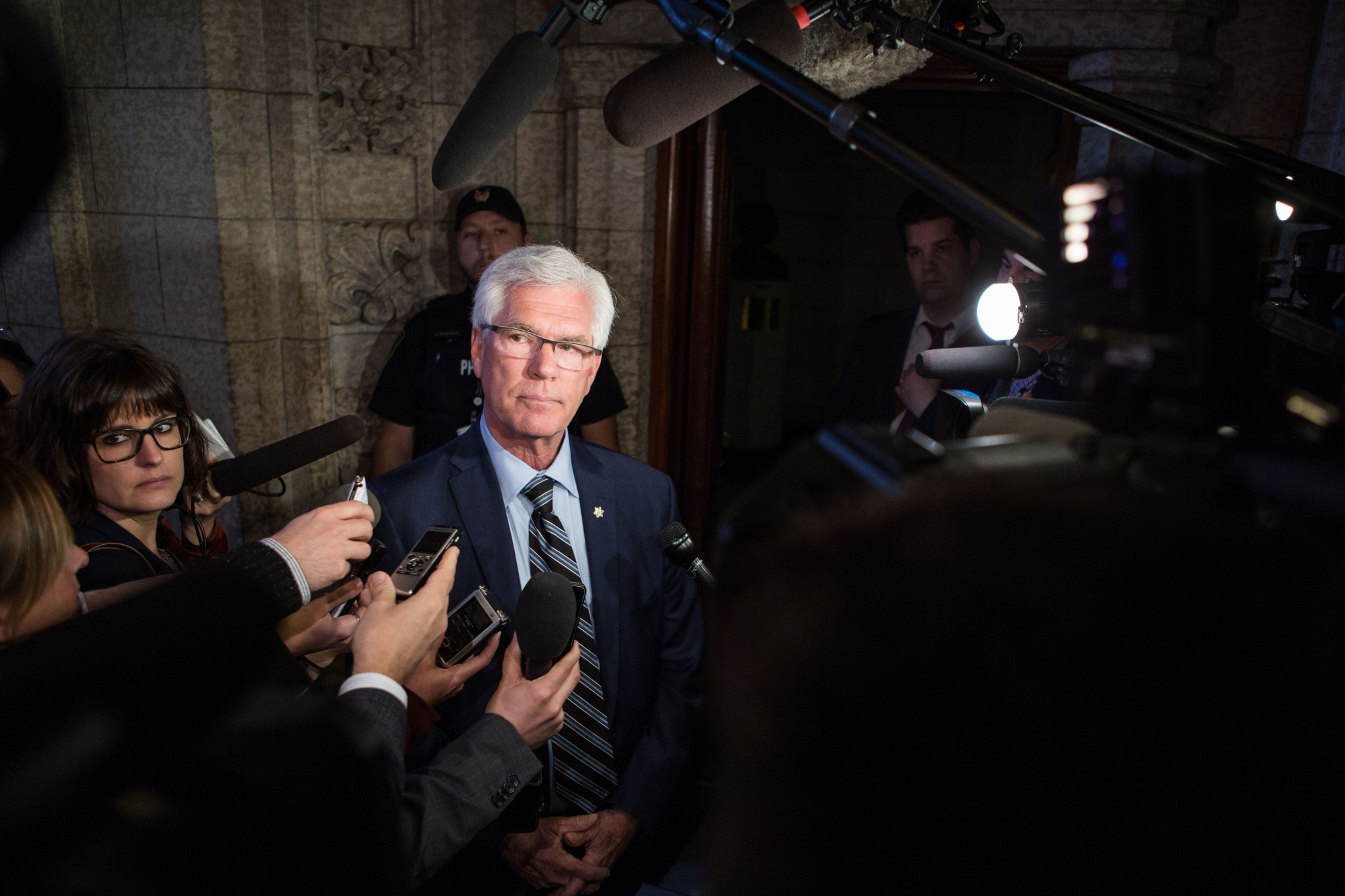 Natural Resources Minister Jim Carr takes reporter questions outside the House of Commons on Parliament Hill on May 15, 2017. Photo by Alex Tétreault
Previous story
Next story

“No doubt there will be conversations with the Chinese about what that means,” said Natural Resources Minister Jim Carr in an exclusive interview on Friday with National Observer. “I’m sure that that will be a discussion that both the Chinese and our delegation will want to have.”

Carr leads a 48-member delegation to China from June 3 to 10 that includes representatives from businesses and associations in the forestry industry, the oil, gas and clean tech sectors, as well as provincial and territorial governments and Indigenous organizations.

The trade mission originally aimed to participate in two international clean tech summits in Beijing, but has been expanded to include a separate program promoting wood products after the United States hit Canada’s softwood lumber industry with steep tariffs in April.

The trip also comes as the U.S. and Canada gear up to renegotiate the North American Free Trade Agreement (NAFTA), and comes just days after Trump said he would pull out of the Paris accord to halt dangerous and destructive climate change.

“We think that we’re well-positioned as a nation to do very well in the international competition for clean technology and innovation, and renewable sources of energy,” said Carr.

The Trudeau government seeks to forge stronger ties with other trade partners, especially its second-largest trading partner, China, and is consulting Canadians on the possibility of a free trade agreement.

That has led to buzz around ministerial trips across the Pacific as potential precursors to a free-trade deal. Asked about that, Carr said it’s his job to market Canadian products abroad in any jurisdiction.

The federal government is giving the trip a big promotional push, and the delegation is featured in a full-colour publication in Mandarin, English and French. There is a podcast and a video featuring Canada’s ambassador to China, John McCallum.

In the video, McCallum says China is “now assuming an international leadership role” and “they want to be seen to be doing business with us.”

When asked what McCallum meant by that, Carr said it meant that “Canada is seen as a reliable partner internationally.”

“We’ve got a good public policy environment, we’ve got an excellent relationship with industry and with unions, and there are partnerships right across Canada that are likely the envy of the world," he said.

Derek Nighbor, president of the Forest Products Association of Canada, one of the groups represented in the delegation, said China represents a “huge opportunity” for Canada’s forest industry.

“You’re seeing a real movement in China, a population, a government that’s more interested in environmental outcomes than they might have been 10 years ago,” he told National Observer.

Roughly half of China’s imports from Canada are related to natural resources, according to the federal government. China is Canada’s second-largest market for products made from forests.

“The U.S. is always going to be important to us, but if we can move one, two, five per cent to another market, that’s just setting our industry up for better success for the future,” said Nighbor.

Proud to be part of this delegation! Diversifying markets is crucial to further growth of the forest industry #CanadaGrowsOnTrees @1969_Joel https://t.co/aTUJyNLvXr

Carr said there is demand in China for sustainable wood construction. Canada is “doing extremely well” there and Chinese would have interest in those products, he said.

Proponents of wood buildings, like the government of Canada, tout the material’s ability to act as a carbon sink, as trees require carbon dioxide to grow. "Using wood for building uses less energy, emits fewer greenhouse gases, and releases fewer pollutants into the air and water than using steel and concrete," says a government web page.

Others point out that logging has to be sustainable or else risk encroaching on vulnerable species. Another issue of concern is monitoring logging in Canada's boreal forest after a report showed wood pulp was being used to produce a soft kind of fabric called rayon.

China is one of Canada's top-five destinations for exports of this pulp product, about $65-million worth in 2016 out of a $479-million industry, according to government figures.

Nighbor also cautioned Carr about setting up deals that didn’t take into account the large distances that forest products have to travel in Canada.

Lumber industry jobs are concentrated in British Columbia, home of 40 per cent of the workforce, as well as Quebec, with 30 per cent, Alberta with 10 per cent and Ontario with eight per cent. Provinces own about three-quarters of Canada’s forests.

“We need to understand that if you’re a producer in Alberta or B.C., China’s a lot closer than if you’re in Northern Quebec or Ontario,” said Nighbor. “The China opportunity is real, it’s significant, it’s important, but it’s not going to be the answer for every company in Canada.”

Carr said the government was “interested in getting a detailed answer” to that question.

“We want to know what the cost-competitiveness would look like, shipping our product from Quebec and Ontario, and we believe there is enough evidence to warrant further exploration on the cost possibilities,” he said.

He said almost all of Quebec’s softwood lumber exports go to the United States, and the government believed it was in the interest of that industry to look for other markets.

A "critical" priority for Carr

Opening new markets is important, he said, but not if it distracts the government from finding a resolution to the lumber dispute. He also said the union was concerned about a deal with China that may encourage the shipment of raw tree logs rather than products that have been cut into beams or planks, or assembled into pre-fabricated structures.

That would further hurt sawmills across the country that have already taken a hit, said Dias.

Large forestry player Resolute Forest Products announced in May that 1,282 workers would be affected by cost-cutting measures, including cutting shifts at sawmills, The Canadian Press reported.

“For us to ship raw logs to China, and sacrifice our own mills, doesn’t make a whole heck of a lot of sense to me,” said Dias.

Nighbor also said the “bigger opportunity” for the industry was exporting more finished and semi-finished products than raw logs.

“I think there’s opportunities for value-added manufacturing in Canada if we get that right,” he said.

Carr said the government was helping defend their interests through its $867 million aid package to the forest industry introduced June 1.

“If you needed any evidence of the government of Canada’s very serious interest in protecting jobs in Canada, then look at our softwood package yesterday,” he said. “Jobs in the forestry sector are absolutely paramount in our minds.”

Questions are circulating in media and industry whether there might be some kind of bargain where softwood lumber is included in a new NAFTA pact. The previous softwood lumber deal was a separate arrangement.

This time, “it’s going to be connected in some way,” said Nighbor.

“Whether it becomes part of NAFTA, or it runs in a parallel course to NAFTA... we basically have to be prepared for all scenarios.”

Foreign Affairs Minister Chrystia Freeland was asked about such a bargain by reporters on June 1 and replied that she wouldn’t answer “hypothetical questions."

“At the moment, the softwood lumber discussion is happening on its own. And you can be assured that is the case because NAFTA negotiations have not yet begun,” she said.

NAFTA discussions are set to begin in August, while talks on softwood lumber are already underway, noted Carr. “We see them on separate tracks,” he said.

Asked whether Canada would consider including softwood lumber in a new NAFTA, he said: “Ask minister Freeland.”