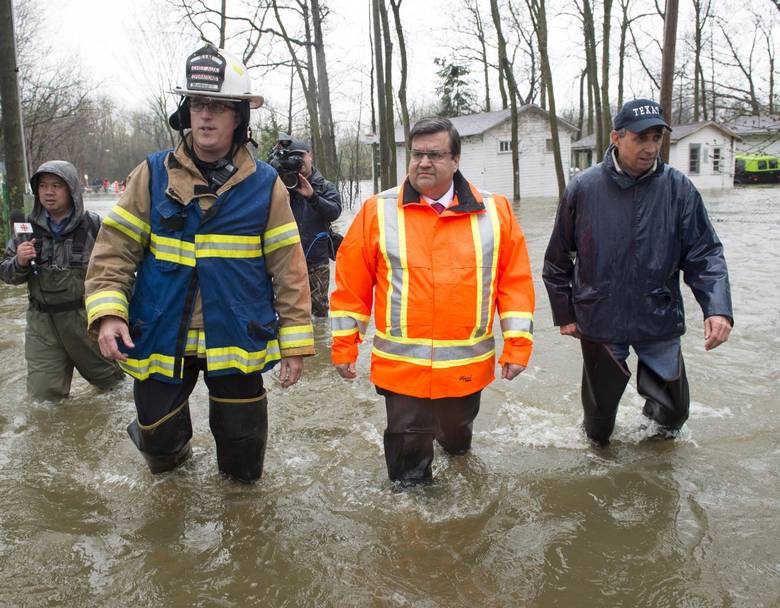 Montreal Mayor Denis Coderre and Île-Bizard Mayor Richard Bélanger tour flooded areas in Quebec on May 6, 2017. Scientists say extreme weather like floods are much more likely now because of climate change. Photo by The Canadian Press
Previous story
Next story

Only hours before U.S. President Donald Trump abandoned a global deal to halt dangerous and destructive climate change, mayors from some of Canada’s largest cities were already planning to move forward without him.

“First of all, the world can exist without some of the players,” said Montreal Mayor Denis Coderre. “We can play a leadership role.”

The mayor of Quebec’s largest city, speaking at the Federation of Canadian Municipalities Big City Mayors’ Caucus in Ottawa on June 1, dealt with severe flooding in his province throughout the month of May. Scientists say floods are becoming more extreme due to the impacts of climate change.

Their mayors' address took place roughly three hours before Trump appeared outside the White House to declare his withdrawal from the landmark Paris climate accord.

Reacting to Trump's imminent withdrawal, Coderre said it was more important than ever that cities, provinces and the federal government “stick together” to address climate action effectively.

Cities in Canada will be hit on average with $5 billion a year in costs from extreme weather events by 2020, rising to a whopping $43 billion a year by 2050, according to the federation's figures.

The Federation of Canadian Municipalities (FCM) has previously applauded the federal government's budgetary promise to fund green projects, but said Thursday it was still looking for “predictable green infrastructure funding” for cities to cut carbon pollution.

Environment Minister Catherine McKenna could not immediately be reached to respond to the federation's request.

At the caucus, Toronto Mayor John Tory said he didn’t think Trump's decision to pull the U.S. out of the Paris deal would add to the risk of failure on domestic climate action in Canada. He pointed to Toronto’s plan to cut greenhouse gas emissions 80 per cent below 1990 levels by 2050 — a topic he said will be discussed at the next city council meeting.

“I think with the partnership of the federal government, and the provincial government, and our commitment to [Paris], we’ll proceed to do that,” said Tory. “Whatever goes on in other countries really isn’t a factor.”

Toronto, Montreal, Vancouver, Ottawa, Edmonton and 18 other Canadian cities have signed the Compact of Mayors, which commits cities around the world, including 134 American cities, to developing and carrying out local plans to reduce climate-warming greenhouse gas emissions.

Toronto and Vancouver also added their names to an open letter to G20 leaders last year urging them to move forward to implement the Paris deal, which aims to keep global warming below two degrees this century.

The FCM, of which they are all members, operates Partners for Climate Protection, a network of Canadian municipal governments committed to cutting carbon pollution.

Edmonton Mayor Don Iveson, who chairs the big-city caucus, said he expects many U.S. mayors will remain committed to climate action and that Canadian cities would continue to work with them bilaterally and through the federation’s U.S. counterpart organizations.

“In spite of what happens to federal climate policy in the United States, it has to be acknowledged that just as in Canada, leadership on the climate file has often come from the bottom up,” he said.

“To the extent that we can share those best practices, or even export solutions to the United States over time as they become recommitted to catching up, federally, and stay committed at the local level, I think there’s even an economic opportunity for us.”

Mayors across major cities in the U.S. had a similar reaction to Trump's mid-afternoon announcement on Thursday.

In a speech at the White House Rose Garden, the president said he would remove America from the Paris climate accord “in order to fulfill my solemn duty to protect the United States and its citizens.” He said the U.S. would “cease all implementation” of the deal effective immediately, and called it “the latest example of Washington entering into an agreement that disadvantages the United States.”

"Withdrawing the United States from the Paris climate accord would be horribly destructive to the planet, our country, and our city," tweeted New York Mayor Bill de Blasio‏.

"With [Trump] pulling out of the Paris agreement, L.A. will stand up to lead," tweeted Los Angeles Mayor Eric Garcetti‏.

Chicago Mayor Rahm Emanuel added, "As the Trump administration pulls back, Chicago will push forward and reduce our fair share of carbon emissions in line with the Paris accord."

Withdrawing the United States from the Paris climate accord would be horribly destructive to the planet, our country, and our city.

Responding to Trump's comments that he was elected "to represent the citizens of Pittsburgh, not Paris," Pittsburgh Mayor Bill Peduto even tweeted:

Fact: Hillary Clinton received 80% of the vote in Pittsburgh. Pittsburgh stands with the world & will follow Paris Agreement @HillaryClinton https://t.co/cibJyT7MAK

In Canada, the federal government has undertaken several environmentally-focused reviews, in addition to promising money this spring in the federal budget for green infrastructure and other environmental initiatives.

Trudeau government-appointed panels of experts have recommended the replacement of the national pipeline regulator with a new federal agency, and an overhaul of how environmental assessments are conducted in Canada, for example.

Two weeks ago, McKenna rolled out a proposal to price carbon pollution nationwide, and this week she reconfirmed that Canada remains committed to the Paris agreement.

Prime Minister Justin Trudeau echoed her sentiments after a phone call with Trump on Thursday afternoon, and vowed to continue working with state-level governments to fight climate change.

"We are deeply disappointed that the United States federal government has decided to withdraw from the Paris Agreement," he said in a press statement. "Canada is unwavering in our commitment to fight climate change and support clean economic growth. Canadians know we need to take decisive and collective action to tackle the many harsh realities of our changing climate.

"While the U.S. decision is disheartening, we remain inspired by the growing momentum around the world to combat climate change and transition to clean growth economies. We are proud that Canada stands united with all the other parties that support the Agreement. We will continue to work with our domestic and international partners to drive progress on one of the greatest challenges we face as a world."