Merkel: Pope urged her to fight for Paris climate deal 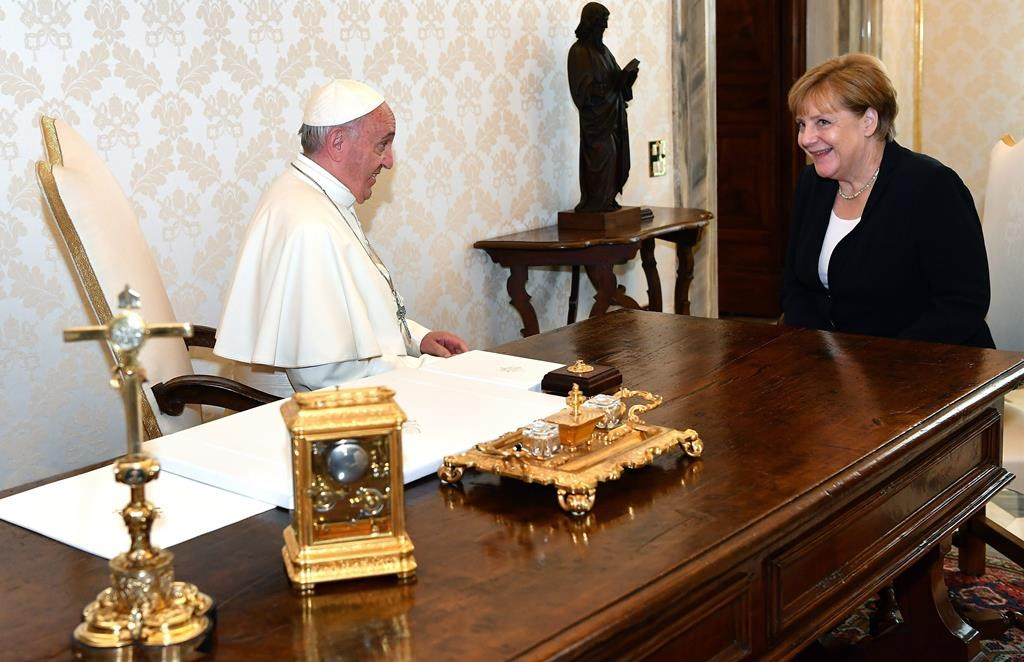 Pope Francis sits at a table with German Chancellor Angela Merkel on the occasion of their private audience, at the Vatican City, on Saturday, June 17, 2017. Photo by The Associated Press/Ettore Ferrari
Previous story
Next story

German Chancellor Angela Merkel says Pope Francis encouraged her to work to preserve the Paris climate accord despite the U.S. withdrawal and shared her aim to "bring down walls," and not build them.

Merkel and Francis met for about 40 minutes Saturday in the Apostolic Palace, focusing on the Group of 20 summit that Germany is hosting in Hamburg on July 7-8.

The Vatican said the talks focused on the need for the international community to combat poverty, hunger, terrorism and climate change.

Francis has consistently called for nations to build bridges not walls — including in reference to the border wall the Trump administration wants to build with Mexico.

Merkel said Francis encouraged her to fight for international agreements, including the 2015 Paris climate accord, which aims to curb heat-trapping emissions.

"We know that regrettably, the United States is leaving this accord," Merkel said.

As he did when President Donald Trump visited last month, Francis gave Merkel a copy of his environmental encyclical, "Praise Be," which casts fighting climate change and caring for the environment as an urgent moral obligation.

Francis issued the encyclical in the run-up to the Paris negotiations in hopes of urging a global consensus on the need to change the "perverse" development models which he said had enriched the wealthy at the expense of the poor and turned God's creation into an "immense pile of filth."

The audience began with Francis expressing his condolences over the death of former Chancellor Helmut Kohl. In his formal note of condolences, Francis called Kohl a "great statesman and convinced European" who worked tirelessly for the unity of his homeland and the continent.

In a particularly heartfelt tone, Francis said he was praying that the Lord gives Kohl "the gift of eternal joy and life in heaven."