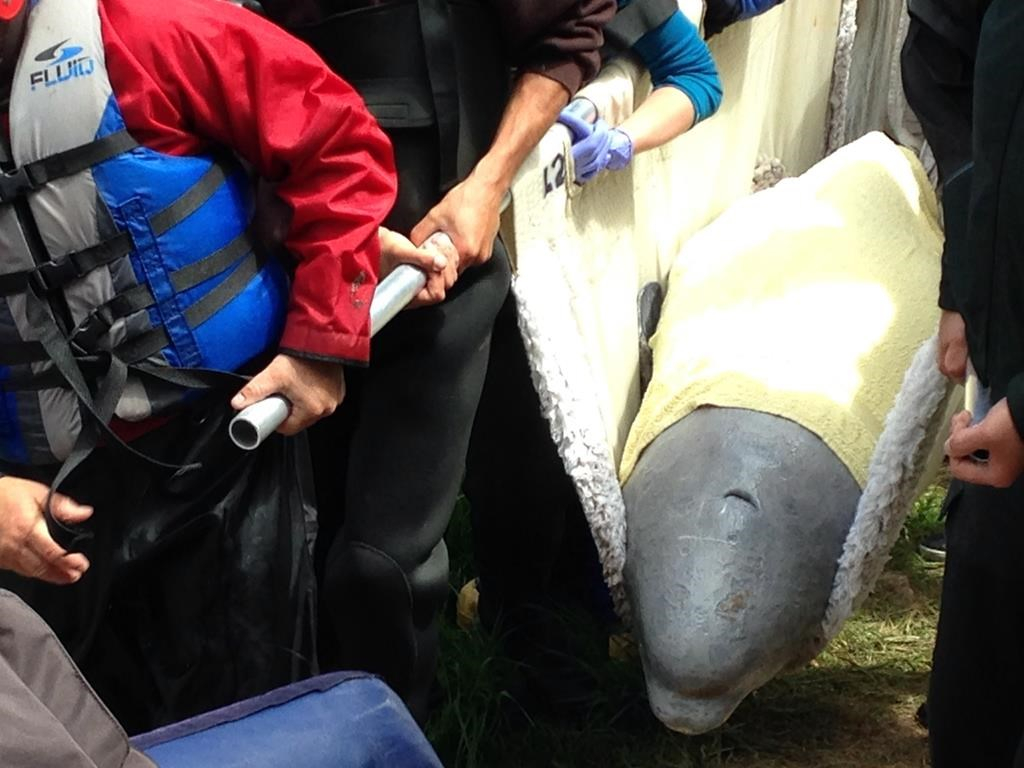 A beluga whale is rescued after getting stuck in the Nepisiguit River in Bathurst, N.B., on Thurs. June 15, 2017. Handout photo by Fisheries and Oceans Canada, GREMM ou Whale Stewardship Project
Previous story
Next story

It is unclear whether a young whale flown from a New Brunswick river to Quebec is able to eat or has joined other belugas, a marine mammal group says.

"The next few days will be critical," Marie-Eve Muller of the Quebec City-based Group for Research and Education on Marine Mammals said in a release Tuesday.

The beluga, which is about two metres long, was released in Cacouna, Que., in the St. Lawrence Estuary last Thursday.

The group says satellite tracking places the whale off Saint-Fabien, about 65 kilometres downstream from Cacouna. The area is "very close to the downstream limit" of waters frequented by belugas during the summer, it says.

"At the time of the catch and when released, the veterinarians who accompanied the operation had issued a reserved prognostic," Muller said.

Signals received Monday night suggest the beluga spends a lot of time near the surface and that it may not be strong enough to swim against the current or even to stay in place.

The group says weather conditions on Tuesday did not allow them to patrol the area and they are now waiting for the next satellite signals.

The beluga strayed into New Brunswick's Nepisiguit River weeks ago, and was removed in a complex operation that saw the endangered marine mammal travel by land, sea and air before being released.

Animal rescuers had said the beluga could not live permanently in fresh water, and showed no signs of leaving the Nepisiguit on its own. They theorized it might have got lost while following fish.

The whale had been coaxed into a net with the use of an acoustic deterrent device. The animal was then loaded into the back of a truck, and taken to the Bathurst, N.B., airport where it was then flown to Quebec in a small airplane.

Once in Quebec there was another car trip before the whale was transferred to a boat to be set free.

The population of the St. Lawrence belugas has been declining since the early 2000s and it’s believed there are fewer than 900 of them still in existence. They were placed on the endangered species list last fall.

By The Canadian Press | News, Politics | June 17th 2017
Opinion State Of The Animal