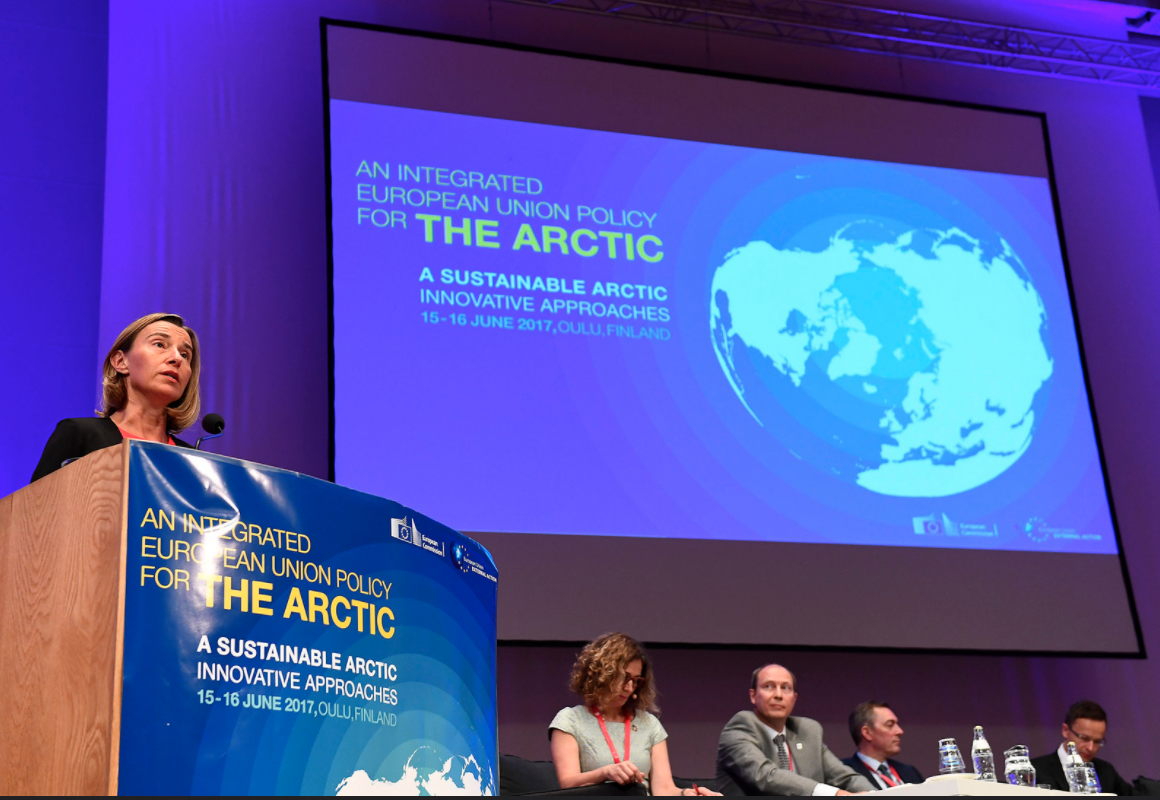 Federica Mogherini, the European Union high representative for foreign affairs, addresses a crowd at a conference on sustainable solutions for the Arctic in Finland, Thurs. June 15, 2017. Photo courtesy of the European External Action Service on Flickr
Previous story
Next story

In the Paris Agreement, the world decided to take responsibility for its present and its future by committing to preserve the very source of life: our planet and its environment.

The climate change deal is an unprecedented multilateral partnership among nearly 200 countries, supported by companies and communities across the world, to address a problem facing us all. It is a challenge we can only tackle together and, since the beginning, Europe has been at the forefront of this collective engagement.

There is a growing acknowledgment that there is no other way than acting together. Today, more than ever, Europe stands by this landmark agreement and leads the way on its implementation, through effective climate policies and strengthened cooperation to build strong partnerships.

We will not negotiate

We also continue to support the poorest and most vulnerable: we see more and more people on the move or exposed to extreme poverty, due to droughts or floods linked to climate change. For Europe, dealing with climate change is a matter of political responsibility and multilateral engagement, and a matter of security, prevention of conflicts and even radicalization.

That is why the European Union will not renegotiate the Paris Agreement, as U.S. President Donald Trump suggested when he announced his formal intention to withdraw America from the pact earlier this month.

We have spent 20 years negotiating. Now it is time for action, the world's priority is implementation.

And, as we address climate change with an eye on the future, we create countless opportunities for the present, by setting up new and better ways to produce and consume, invest and trade and protect lives, assets and livelihood opportunities, for the benefit of all people as well as the planet.

To accelerate the global transition to a low-emission, climate-resilient future, we have started to strengthen our existing partnerships and to seek and find new alliances, from the world's largest economies to the most vulnerable island states. Because from the Arctic to the Sahel, climate change is a reality today, not a remote concept of the future.

Time to turn plans into policies

We expect all countries to uphold the Paris Agreement and put words into action by implementing their national climate plans and strengthening their efforts over time. Plans must be turned into concrete, actionable policies and measures – now.

The European Union is already working towards completion of the legislative and regulatory framework necessary to deliver our Paris target, to reduce emissions by at least 40 per cent by 2030 compared to 1990. Our legislative actions cover all sectors of the economy, and we are putting energy efficiency first and boosting uptake of renewable energy across the bloc.

Taking action on climate change goes hand-in-hand with economic growth. Take the EU's case: our emissions have fallen by 22 per cent since 1990, while total EU GDP has grown by 50 per cent.

During this period, we have created new jobs, businesses and technologies. We are preparing our economies for the future and, at the same time, investing in making our societies more resilient to climate change, to reduce current and future risks.

We have more than two decades of experience in developing and implementing ambitious climate policies and we are ready to share our experiences and lessons learned. It is not by chance that we have already established extensive climate policy cooperation with key partners across the globe. We will also continue to provide substantial funding to support climate action in partner countries. In 2015 alone, EU support totalled EUR17.6 billion (roughly $26 billion).

Looking ahead to COP23

In just a few months, in November this year, countries will gather in Bonn, Germany for the next UN climate conference – COP23 – to continue to flesh out the work program for implementing the Paris Agreement. Next year, the facilitative dialogue to be held as part of the UN climate process will be the first opportunity since Paris to look at our collective efforts to limit global warming and assess what we have done concretely to deliver on the commitments made.

These are key steps for turning the political agreement reached in Paris into reality.

Yet this is a challenge we can only overcome with the greatest possible involvement of civil society, businesses, local communities, cities and regions in parallel. And we are seeing an unprecedented breadth and scale of action by all of these actors. As institutions, we can plan and support the strategies needed to save our environment, but hey that have the crucial role of turning policies into action and results on the ground.

Our new EU 'Consensus on Development' actively promotes this role. Enhanced cooperation and coordination among all stakeholders are key – we would say the key. Because only by working together will we be able to live up to the level of ambition we have set ourselves and reap the many benefits of concerted action: lower emissions, greater energy security and energy efficiency, innovation-driven growth, job creation, more resilient societies and a better environment.

Paris was a defining moment in the global challenge to safeguard the planet for present and future generations. The EU is determined to not only implement the Paris Agreement, but also build strong global partnerships to ensure that diplomacy and multilateralism bring real, tangible results for our people. The world, the planet, can count on the European Union.

— Federica Mogherini is the High Representative of the Union for Foreign Affairs and Security Policy and Vice-President of the Commission. Miguel Arias Cañete is Commissioner for Climate Action and Energy.

By Elizabeth McSheffrey | News, Energy, Politics | May 23rd 2017
Race to a Safer World

Addressing the impacts we are

Addressing the impacts we are having in the planet is long overdue and the second most critical issue there is. This agreement is a small step in the right direction, but the UN announcement that even IF all signatories fulfilled the agreement to the letter, that would only remove HALF of what is needed to achieve 2 degrees of warming, never mind Canada's claim of 1.5. This announcement has been completely ignored by governments. The most critical issue facing the planet is human overpopulation and until countries get serious about changing this, the planet and it's species are in peril.

This is supposed to be the start of a revolution, but until governments release their death grip on the "Economic Growth" model that promotes global over consumption, built-in obsolescence in machinery, and throw-away mentalities, things will continue to deteriorate. If you want to be real leaders, legislate minimum 10 year warranties on all appliances and cars for a start. Force all manufacturers to lower energy use in their products. Start a global campaign to get people to reduce their footprint and only use what they really need. Until mega ships loaded with containers of plastic junk become extinct, we will continue to increase the damage.