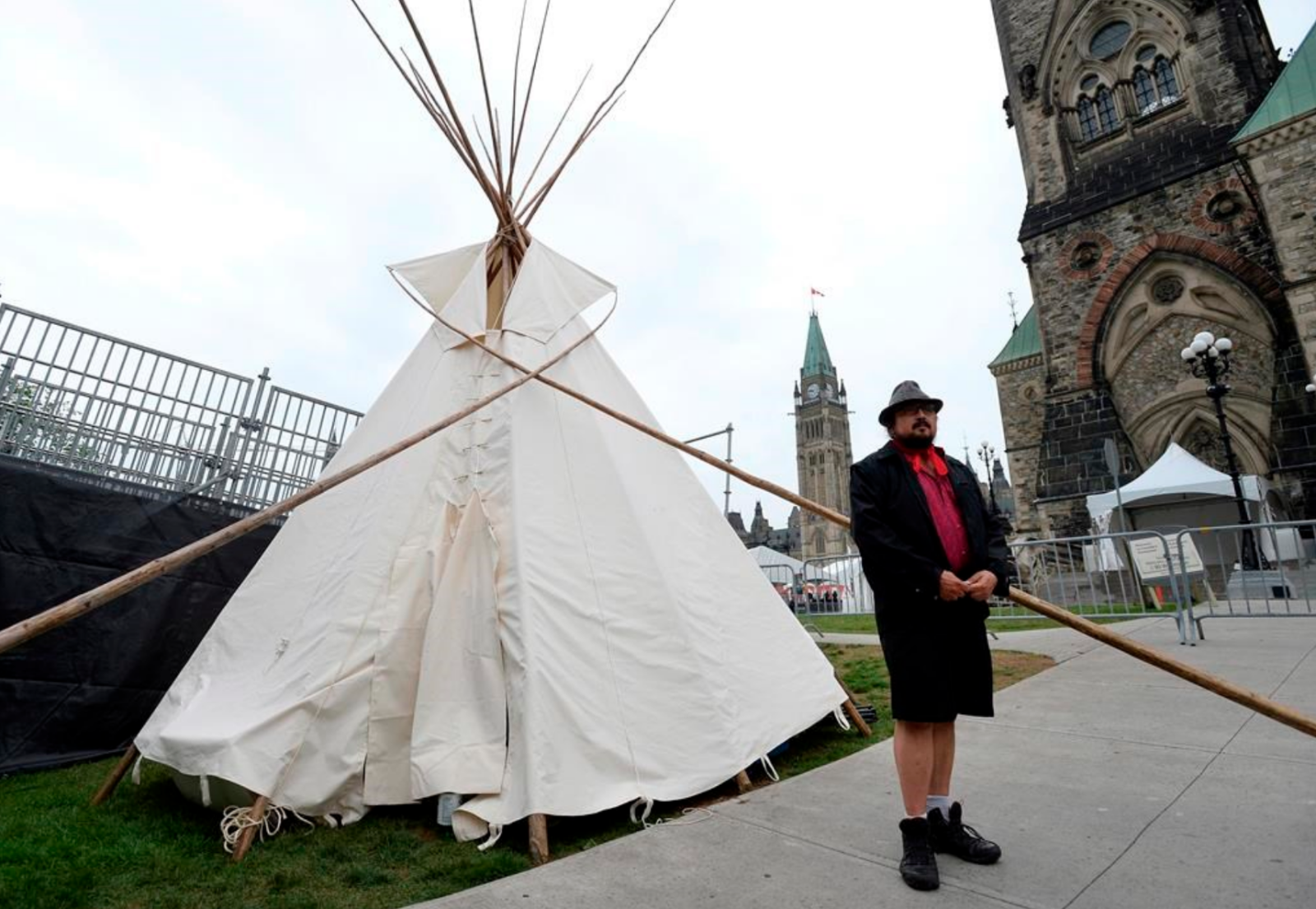 A man stands outside a large teepee erected by Indigenous demonstrators to kick off a four-day Canada Day protest in front of Parliament Hill in Ottawa on Thurs. June 29, 2017. Photo by The Canadian Press/Justin Tang
Previous story
Next story

An Indigenous demonstration teepee was moved onto Parliament Hill Thursday evening after a man was arrested for assaulting at least one of the activists.

The Bawaating Water Protectors from Sault Ste. Marie, Ont., arrived Wednesday night on Parliament Hill with plans to erect a teepee and engage in four days of ceremonies they're calling a "reoccupation" to draw attention to the history of Indigenous people in Canada during 150th birthday celebrations this weekend.

"We're here to make people aware of the genocide that went on, the assimilations that went on," said organizer Brendon Nahwegezhiche. "That is a part of the history and that is the truth of Canada, unfortunately."

Originally the group clashed with police, who arrested nine people and told the group they couldn't set up the teepee. However within a few hours all nine were released without charges and the teepee was set up on a slope near the eastern entrance to the Hill.

It wasn't where the group wanted it to be but was an initial compromise until it was moved to a location onto the Hill close to the main stage where Canada Day festivities will take place on Saturday.

The move came after RCMP arrested a man who caused a scene at the demonstration and allegedly knocked a cell phone out of the hands of one of the activists. He was to be charged with mischief, one government source said.

Following the incident, negotiations began to move the teepee up onto the main lawn near the West Block.

The Bawaating Water Protectors are just one of many Indigenous groups planning protest events and demonstrations this weekend to draw attention to the fact that for them, there is nothing to celebrate.

Prime Minister Justin Trudeau, speaking at an event in Charlottetown, said their position is understandable and must be respected.

"We recognize that over the past decades, generations, indeed centuries Canada has failed Indigenous Peoples."

He said there has to be a compromise to ensure the safety and security of huge crowds on Canada Day on the Hill as well as respect for the demonstrations.

"That's what I expect of our security services and that's what I am expecting to see," he said.

Trudeau's office wouldn't say if he intervened to stop the possibility of a large confrontation ahead of the big event July 1.

However there were signs the government was trying to do what it could to keep tensions down, including working to move the teepee to a location that is safer for everyone involved.

Indigenous Affairs Minister Carolyn Bennett is hosting a picnic in her riding Saturday at which another reoccupation event is planned. On Thursday afternoon, she issued an invitation on Facebook and her MP website, making note of why many indigenous people won't be celebrating and inviting them to have their voices heard at her picnic.

"While many Canadians will be celebrating on Canada Day, for far too many it is a reminder of our colonialist, racist past," she said in the invitation.

"As we mark 150 years since Confederation, it's important for us to remember and reflect all aspects of our collective history. We need to remember that we are all #treatypeople and that Reconciliation isn't an Indigenous issue - it is a Canadian imperative."

The Parliament Hill event and the protest planned at Bennett's barbecue are but two of many such events scheduled for Canada Day festivities across the country. There have been numerous social media campaigns using hashtags such as #UNsettleCanada150 or #Resistance150 and a call from Idle No More to rise on up July 1 with a "National Day of Action — Unsettling Canada 150."

Sen. Murray Sinclair, who chaired the Truth and Reconciliation Commission, will be on hand for Canada 150 events in Ottawa on Saturday as a gesture of reconciliation from the Indigenous perspective.

"Celebrate is not the right word," he said. "I will be attending events."

Sinclair said he is in full agreement with the Bawaating Water Protectors' attempt to draw attention to the history and present for Indigenous peoples, and said there is "still a long way to go" before Canada achieves reconciliation.

Sen. Sandra Lovelace Nicholas said in a statement Thursday that, as an Indigenous woman from the Tobique First Nation in New Brunswick, she is not celebrating this weekend.

"We are of the opinion that we will celebrate when all treaties are settled, all First Nations children enjoy equality in education, health care, safe drinking water, quality housing and governance in our own land."

UNDRIP must become LAW in

UNDRIP must become LAW in Canada and the operational principle in all nations, not just a wishful thought coming down from the United Nations.