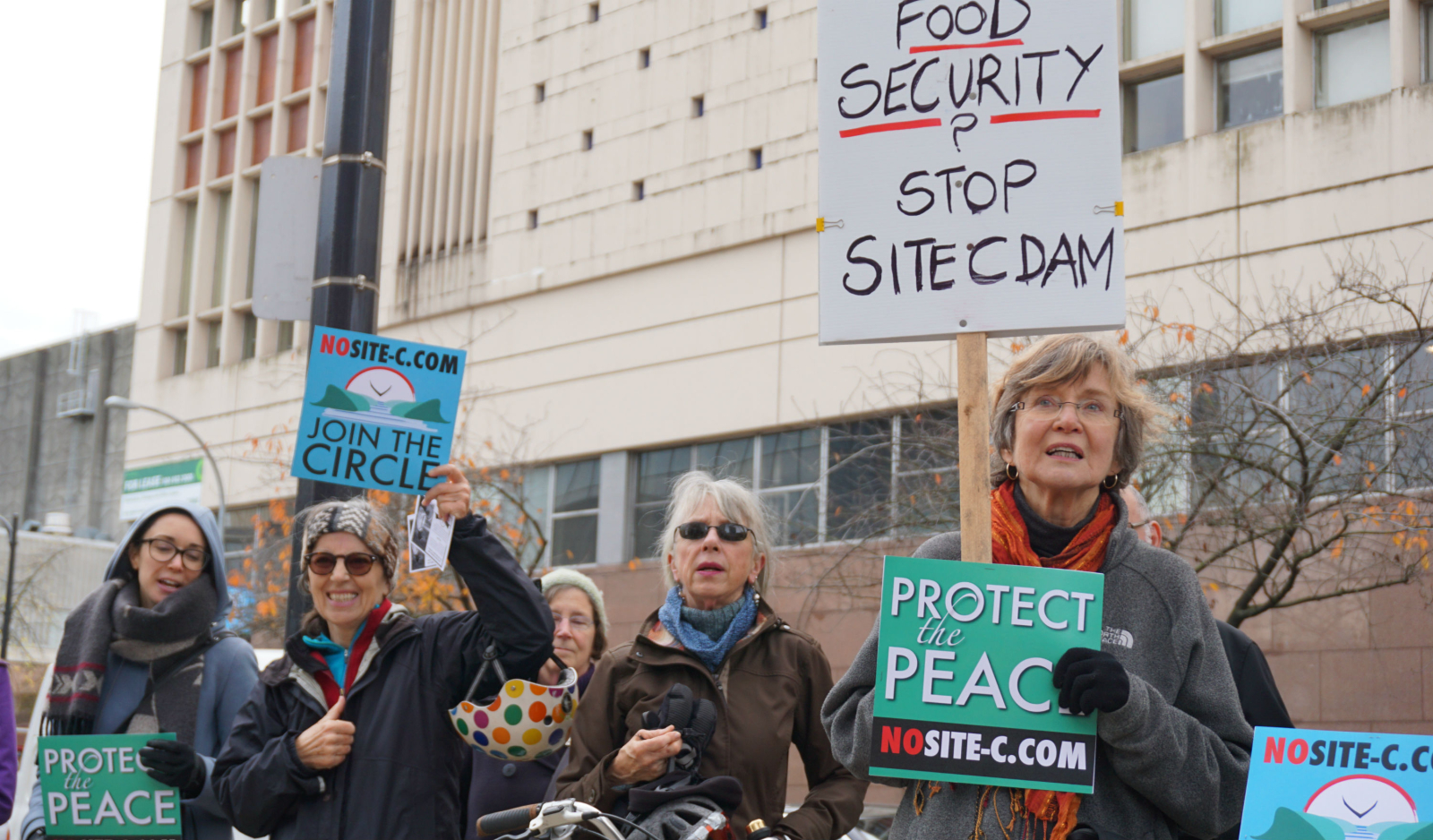 Protestors march outside the BC Hydro building in downtown Vancouver, demanding an immediate halt in construction of the Site C Dam on Nov. 18, 2015. Photo by Elizabeth McSheffrey
Previous story
Next story

One of the most contentious issues of the B.C. provincial election, which concluded last week with a new incoming NDP premier, has been the $8.8-billion hydroelectric Site C Dam.

The controversial project — already under construction in northeastern B.C. — could alter the flow of water through the iconic Wood Buffalo National Park. It's a UNESCO world heritage site, home to the largest population of wild bison in the world, and the world's largest inland river delta.

The dam's reservoir is expected to destroy more than 100 kilometres of river valley bottoms along the Peace River and its tributaries, and the project is located on Treaty 8 Territory belonging to the Doig River, Halfway River, Prophet River and West Moberly First Nations, which have not given their consent to the project.

Its supporters argue that upon completion, the dam will produce enough clean power for 450,000 B.C. homes each year, but a joint federal and provincial review panel has found "inconsistent" and "conflicting" messaging from BC Hydro and the B.C. government in establishing the need for the project's power.

To help raise awareness and public pressure to stop the dam, on July 8, Indigenous people, farmers and advocates for the environment and social justice will gather in Vancouver and the Peace River Valley for the 13th Paddle for the Peace event. It's an annual celebration of the integrity of the Peace River Valley's rich ecosystem and demonstrates opposition to the mega-project.

Amnesty International has objected to the Site C Dam on humanitarian grounds; one of its required highway realignments will plow through burial grounds and a sweat lodge that are sacred to the local Prophet River and West Moberly First Nations.

It is time for B.C., and indeed Canada, to take a look at the real purpose and impact of Site C, not only for people based in this province, but for the planet as well.

So far, political rhetoric for the project, pushed forward by the outgoing administration of Christy Clark, is that B.C. needs the electricity of Site C for our growing population. But the BC Sustainable Energy Association has reported that increasing the efficiency of current power supplies could compensate for that increased energy demand, if such a demand were to arise — a scenario whose certainty is not well-established.

According to University of British Columbia researchers, BC Hydro's predicted demand for electricity has "dropped significantly," meaning that electricity from Site C won't be fully need for nearly a decade after the project's expected completion date in 2024. Even then, the efficiency and cost of renewable energy options like wind and solar have improved so much in recent years, they are much more competitive on the market than the outdated mega-dam.

Many critics argue the only purpose for the energy from Site C dam is to power the liquified natural gas (LNG) industry, and its associated fracking. According to an analysis published in 2013 by The Financial Post, B.C. would need enormous power infrastructure to fuel its proposed LNG plants, which would need up to half of all the existing power in the province.

The idea is that LNG exporters could substantially cut climate-polluting greenhouse gas emissions by using hydroelectricity for liquefaction, rather than burning gas to power their facilities. A recent study by Washington State University, however, suggests that hydroelectricity is not actually as 'clean' as once thought, because large amounts of emissions-intensive methane gas are released when microbes devour the rotting plant material that builds up behind dams in vegetation-heavy areas.

As health professionals, the possibility that the Site C Damn could be linked with propping up the LNG industry — and hydraulic fracking, by extension — is deeply disturbing. Recent research links this kind of fracking with negative health impacts for children, and increased hospitalization rates for nearby residents who live near the operations.

Supporters of the Site C "Clean Energy Project" further point to the 2,500 temporary jobs it has created during its construction, but ignore the fact that the dam will eventually create only about 160 permanent jobs, compared to a potential 1,870 permanent jobs to generate the same amount of electricity using geothermal energy. Even the B.C. Government and Service Employees' Union, one of the province’s biggest unions, has come out against the project for the environmental and cultural risks it poses.

Should we not be investing in plentiful and sustainable long-term jobs now, instead of destroying sacred lands for short term projects we do not need, for an LNG industry that has yet to materialize – and one that will trash our provincial emissions reduction targets if it does?

Site C is out of tune with the new reality. It is yesterday’s project. Today is the time to think of clean energy and reconciliation with Indigenous peoples.

In the year of Canada’s 150th anniversary, let’s not hand future generations a dud. Let’s give them a gift that confers a very high probability of healthy, secure lives.

Well-written and informative article including evidence-based statements about the dangers of fracking and LNG extraction and use to human health. The provincial and Federal Liberals are putting human health in second place -- again.

All the above arguments are

All the above arguments are false.
See:
http://dreamgreen.ca/WhySiteC.html

Thanks, Warren and Amy Anne,

Thanks, Warren and Amy Anne, for a well-articulated summary.