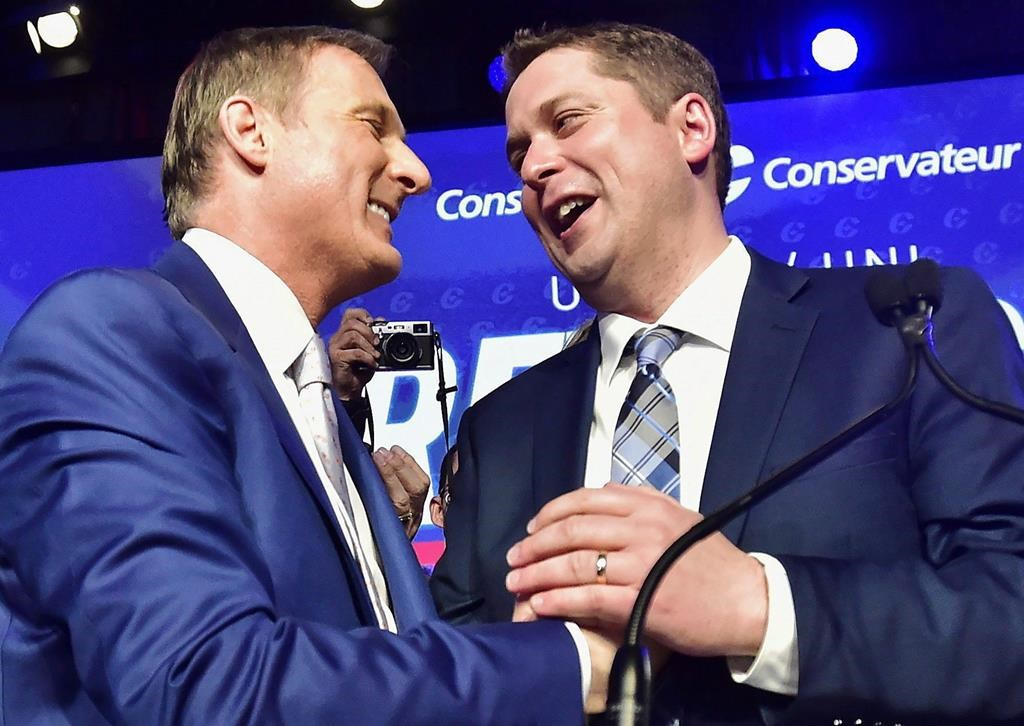 Maxime Bernier congratulates Andrew Scheer on his leadership win at the federal Conservative Party's convention on May 27, 2017. Elections Canada reports Bernier was the top fundraiser among contenders. Photo by The Canadian Press/Frank Gunn
Previous story
Next story

Maxime Bernier lost the Conservative leadership race, but he remained the top fundraiser right to the end.

Newly released figures from Elections Canada show the Quebec MP raised $426,329 in the second quarter of 2017, bringing his total fundraising results so far up to nearly $2.5 million since he entered the race last year.

That is more than any of the other leadership candidates managed to pull in, including the guy who narrowly beat him to win the race.

That puts him in third place for the second quarter and fourth place overall.

"Money is not a tremendous leading indicator when it comes to leadership races," said Chad Rogers, a Conservative strategist.

"One of the reasons is that the electorate is so small and so narrowly defined," said Rogers, a founding partner at Crestview Strategy. "The way you raise money in a leadership race is not the way you acquire supporters."

That lack of predictability applies beyond the surprising result that made Scheer the winner after 13 run-off ballots.

Celebrity businessman Kevin O'Leary, who withdrew from the race a month before the finish line, raised $383,450 during the second quarter.

His total of $1.4 million makes him the third-strongest fundraiser overall.

Conservative MP Kellie Leitch, who was the first to declare her candidacy, raised a total of nearly $1.5 million over the course of the campaign, although her second-quarter result was roughly half the amount that Scheer raised.

Her total makes her the second-biggest fundraiser overall, but she was dropped off the ninth ballot with 7.96 per cent of the vote.

The numbers could present a cautionary tale for Ontario MPP Jagmeet Singh, who has raised $353,944 since joining the race to replace NDP leader Tom Mulcair in May. His total puts him far ahead of rivals, despite having been the last to enter contest.

Alise Mills, a political strategist associated with both the federal Conservatives and the B.C. Liberals, said it might have taken longer for party members to get to know Scheer, but some people might also have been turned off by the notion that Bernier, a consistent front-runner, had already won.

"It was really a tortoise and the hare situation in the end," she said.

Tim Powers, another Conservative analyst, said it would nonetheless be good for Scheer to recognize that Bernier remains an asset to the party and find a way to channel the financial energy he brought to the campaign.

Powers also said that if it ends up that Scheer himself is not as big a draw when it comes to raising money, the party can always turn to fundraising appeals based on issues such as the $10.5-million settlement the Liberal government provided to Omar Khadr.

"Lord knows the Conservatives have been pretty good at issues-based fundraising," said Powers, the vice-chairman of Summa Strategies.

O'Leary told The Canadian Press he plans to begin fundraising again early next year to repay just under $400,000 in campaign debt.

Elections Canada rules forbid contestants from contributing more than $25,000 to their own campaign.

O'Leary said he asked Elections Canada in late May if his company, O'Leary Productions, could lend his campaign money to make sure smaller vendors did not suffer financial hardship, but the agency turned him down.