Canadians welcomed as heroes in the Netherlands 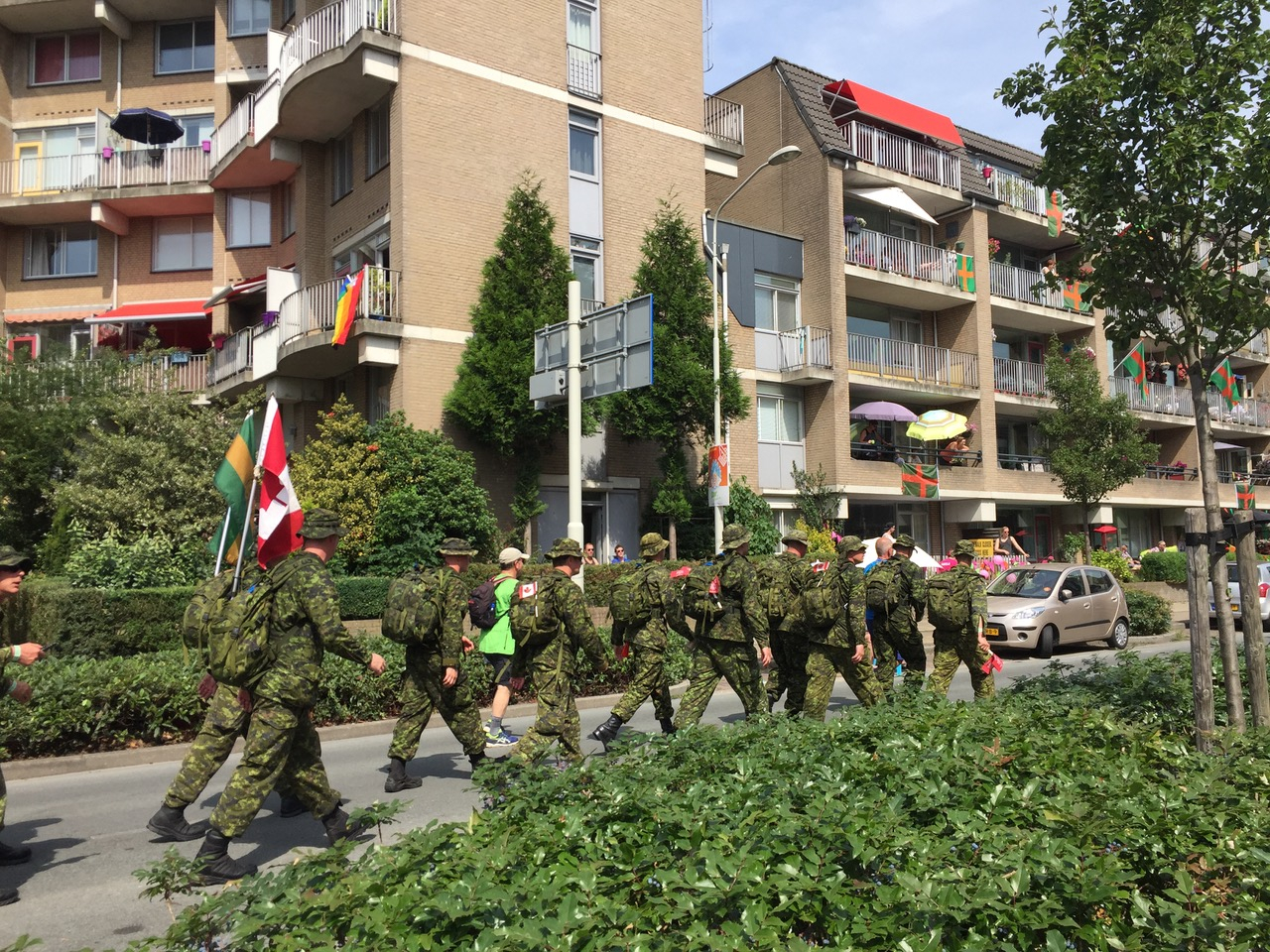 Canadian soldiers march through the Dutch city of Nijmegen as part of the Four Day Walk. Photo by Dylan Waisman
Previous story
Next story

Over a million Canadian men and women served during the Second World War.

About 7,600 Canadians died during the nine months it took to liberate the Netherlands.

These statistics represented little more than numbers to me until last month, when I was confronted with the living memories of Canada’s historical sacrifices, during the world’s largest walking event.

Known as the Four Days March, the rigorous exercise began in 1909 for Dutch soldiers to build up their stamina. Today it is an annual tradition that begins and ends in Nijmegen, a small Dutch city in the eastern province of Gelderland.

Having moved to the Netherlands last year to pursue my Master’s in Human Rights Law at Radboud University, I have a keen interest in historical human rights. Especially being a descendant of Russian Jews on my father’s side, the Second World War holds a particularly painful place in my heart.

However, the scope of the sacrifice made by Canada, the country that accepted my immigrant ancestors, was never an aspect of the story I paid particular attention to before.

Never did I expect that moving to the Netherlands would connect me with my Canadian heritage. Being witness to the extent of the celebrations held by the Dutch to honour Canadians, and meeting Canadian soldiers, Canadian citizens, and now-grown children of the Second World War, has brought a history to life that I thought no longer impacted me.

"I am a happy man because of the Canadians," he told me

Moish shouted to get my attention from his seated position at a bench beside the road, where he was watching the Four Days marchers pass their 35-kilometre milestone, across from the Canadian Military Cemetery.

I didn’t have a poppy pinned over my heart, and he insisted I needed one. The 81-year-old man was immaculately put together, wearing a neatly pressed Dutch Naval uniform, and a badge of the Royal Legion of Canada, prompting me to tell him that I am Canadian.

Excited, he hurriedly gathered himself to stand. Beaming with stoicism, he held my face in his hands, looking at me as if I was one of the Canadians responsible for his liberation. He kissed my cheeks three times.

With tears in his eyes and a smile that spoke of deep gratitude, Moish told me in broken English that as a 9-year-old boy living in Amsterdam, the first thing he remembers after the war was the Canadian soldiers who had fought for nine months to liberate him. They would hand him chocolate and cigarettes, then promptly take back the cigarettes with jesting scolds.

“I am a happy man because of the Canadians," he told me as we hugged goodbye.

Nijmegen is the oldest city in the Netherlands, and Europe’s greenest. It is characterized by a mismatched ensemble of Roman ruins, 14th century architecture, and postwar additions which serve as a reminder of the destruction the city endured during the Second World War.

Annually, 50,000 people march up to 50 kilometres a day for four consecutive days, starting and ending in Nijmegen, and traversing the surrounding towns.

Civilians and military members from around the world walk, including a team of over 200 Canadian soldiers.

I live in the city’s centre. Surrounding my apartment, every park and walking street had transformed into a mini festival ground with a live music stage, food trucks, a beer garden and plenty of people from around the world.

Among the cobblestoned streets, teetering old buildings, market squares and bike lanes, the green and brown patchy camouflage print of an army uniform stands out, especially when boasting the bright red and white of Canadian maple leafs.

I was overcome with the strange sense of national pride that grows when one spends ample time abroad.

A troop of 12 soldiers wearing full military regalia and carrying equipment that weighed about 10 kilograms was marching through town to a symphony of cheers of encouragement, grateful applause, and ‘Go Canada’ chants from locals.

People had gathered for the second day of walking, lining the streets as far as could be seen.

I began to run down the street with groceries in hand, and trailed the brigade for several metres. I eventually gathered the courage to introduce myself to my fellow Canadians.

Fulfilling every stereotype about friendliness, the Saskatchewan-based team kindly invited me to walk with them as they completed their 50 kilometres of the day.

There I met Rob Tryhorn, who was doing the Four Days March for a second time, after having been in Nijmegen in his 20s.

Rob reflected on the differences between his experiences: “When you’re that age you don’t really get a sense of what you’re doing, whereas now you know the historical significance and the sacrifice the guys made.”

When asking others what motivated them to walk, sacrifice came up as a recurring theme.

Joe Young, from the same brigade, explained, “It’s a very powerful movement for us who come here, to view the sights, and see the names of our grandfathers and great-grandfathers before us. It’s very moving to wear the same uniform as someone who 70 years ago crossed the line at Vimy Ridge.”

Remembering Canadian soldiers in the Netherlands

On the third day of the marches, the route passes through the city’s Canadian cemetery, where nearly 2,500 Canadian soldiers are buried.

When I arrived, I was surprised to find a full marching band, and sizeable contingent of the Swiss army in full ceremonial procession, blasting out the Canadian anthem on horned instruments.

Having never felt the need to visit before, and not knowing what to expect, I froze with tears in my eyes as the image of sprawling white tombstones came into view.

Meticulously well kept, with trimmed grass and bright flowers, each headstone was carved with a maple leaf, the name of the fallen soldier, a personal statement from the soldier’s family, and their age, ranging mostly from their 20s to 30s. While I walked along the endless rows of pristine white tombstones, the Swiss soldiers I had seen previously had broken out of line, each walking towards a different gravestone with a white rose in hand.

I stood by as a witness to the days’ remembrance ceremonies for several hours, and I was amazed at the internationality of the soldiers paying their respects, including Swiss, American, German, Italian, and Dutch men and women.

As I sat down beneath a tree, taking in the scope and grandeur of the sacrifice so many young men gave in order to secure the freedom of others across the ocean.

I was shaken by the parallel ways in which so many young Canadians traveled overseas to be in this small city in the Netherlands.

Like me, some who would have fought in the Second World War would also have been from British Columbia, and also might have been just 21 years old. Those who rest here now gave their lives to liberate the people who live here today.

Because of their sacrifices, I am able to travel from Canada to Nijmegen, to live and study in the Netherlands without a second thought to my rights, freedoms, or safety.

That sacrifice is not forgotten by the Dutch people of Nijmegen. On the contrary, Canadian soldiers are celebrated as heroes.

A speaker during the Canadian procession recalled the delight that young Dutch children experience when they are assigned the responsibility of maintaining a tombstone for a fallen Canadian soldier for a year.

Canadian soldier Capt. Johann Crombach also cited Canadian sacrifice as one of his motivators for pursuing the walk.

Looking back on his Dutch and Canadian ancestry, Crombach used the experience to connect with the history of his grandfather, who lived in Nijmegen during the war before immigrating to Canada in 1958.

To walk in the footsteps of his grandfather and feel the support of the Dutch people, Crombach explained, is “like nothing I’ve ever experienced. It floors me. I don’t think this could ever happen in Canada. Simply because the entire community comes together for this, at such a scale that would be difficult to do.”

I didn’t fully understand the magnitude of Crombach’s statements until the fourth and final day of the walk.

The city shape-shifted again and the atmosphere heightened, as people giddily roamed its centre with bouquets of gladioli in hand, looking for finished marchers to congratulate.

The Dutch have a saying that roughly translates to, “death or the gladioli,” meant to express an all-or-nothing outlook, one that truly embodies the days’ events.

Again, following the sight of red and white flags brought me to meet Jan, Loues and Robert, three Dutch gentlemen who had completed upwards of 30 marches each.

Jan, decked out in Canadian flags printed on his shirt, hat, backpack, and attached to a flagpole, has been living in Vancouver since 1990, but returns to Nijmegen annually to complete the march.

He and his wife moved to Canada after retirement, planning on only staying for a few years, but has since become a Canadian citizen, along with his children, grandchildren, and great-grandchildren, who all call Canada home.

The men said the one thing they take away from their decades of marching was “Gezelligheid,” a Dutch word that roughly means the atmosphere of togetherness that gives people a warm feeling.

While explaining to me that Gezelligheid was the collection of friendly and loving connections made between strangers, a woman walked up and handed each of them a gladioli flower, exemplifying the unique atmosphere of togetherness they were describing.

To walk in the past, the present, and the future

The honour is immense for those who walk in the footsteps of their ancestors in Nijmegen.

Unwittingly, I had been walking in the footsteps of past Canadians all year long, without knowing the depth of the history that allowed me to do so freely.

Nor was I aware of the uncanny parallels between my move from Canada to Nijmegen, and the young Canadians who fought in this city during the Second World War.

Not only has learning about the history of this city enriched my view of the place I now call home, but it also deepened my sense of gratefulness, and humbled my sense of self, helping me understand my surroundings within the grand timeline of humanity. Simultaneously, it has also triggered my curiosity, wondering how many other ways the overlapping paths of history shape the way I experience my world.

This year I didn’t take part in the walk, in part due to my looming thesis deadline, and in part because admittedly, I hadn't understood the motivation behind a 200 kilometre trek.

After this experience however, I aim to make it an annual pilgrimage.

The Dutch are diligent about remembering the sacrifices made by Canadians. It shapes the way they live today.

Perhaps as Canadians we can learn from this, remembering not only our own military sacrifices, but the sacrifices and experiences of those who came before us in any sense, whether that be family members who sacrificed their lives in foreign lands to immigrate and set up a life in our multicultural country, or whether it be the Indigenous peoples of Canada, who endured so much at the hands of a settlor government.

By its very nature, history is absent from the immediate present, and therefore is easily taken for granted when we’re caught up living between the day to day.

But harnessing a deeper understanding of our collective past serves as a powerful tool of self-awareness, humility, and respect.