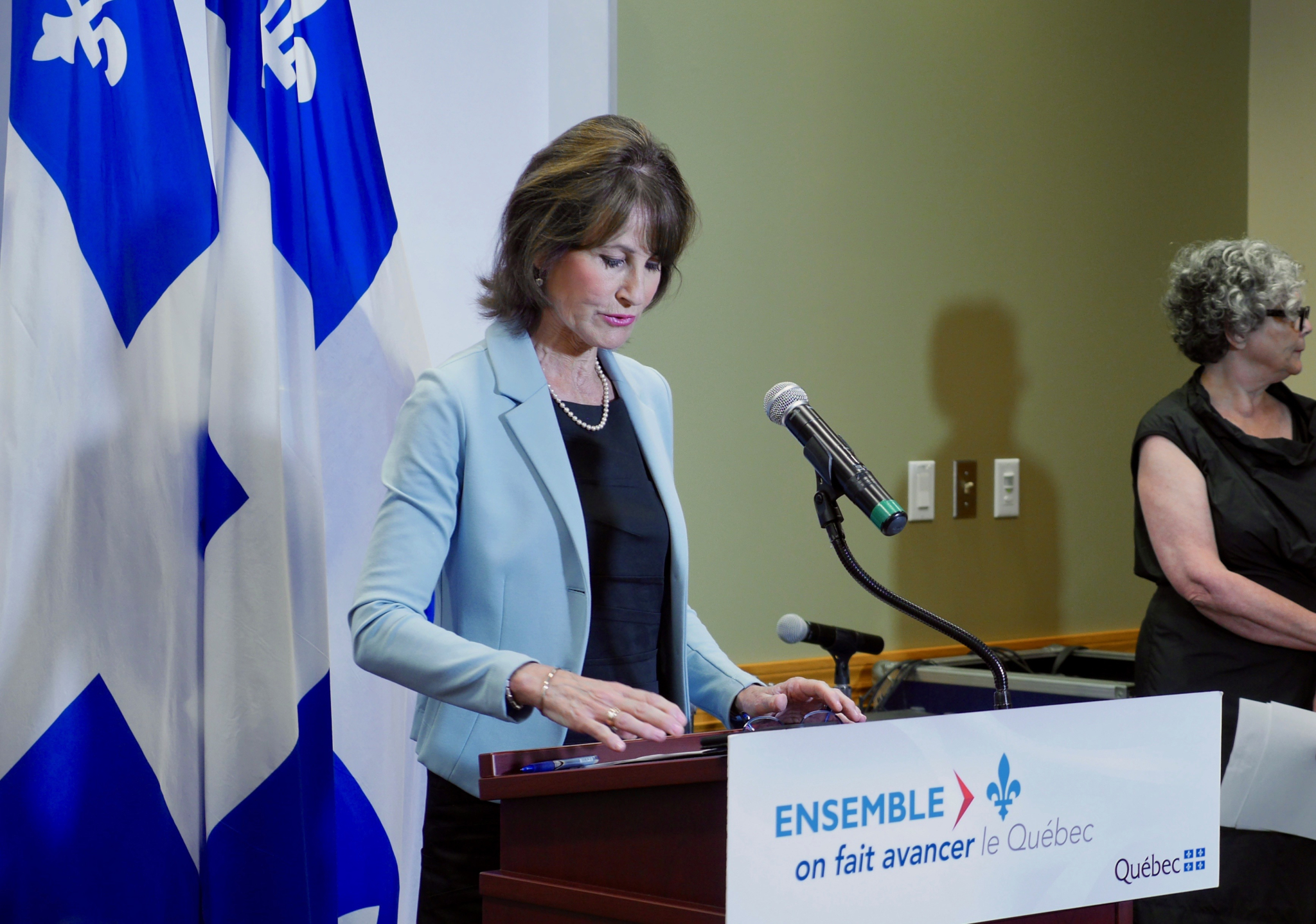 Quebec Immigration Minister Kathleen Weil speaks to reporters in Montreal on Aug. 3, 2017. An increasing number of Haitian asylum seekers coming from the U.S. have crossed into Quebec in the past weeks. Photo by Clothilde Goujard
Previous story
Next story

Canada is facing a 'crisis' as a surge of U.S. migrants continue to cross the border illegally to seek asylum from the Trump administration, says the head of the union representing Canadian border services agents.

For the past two weeks, government officials estimate that Quebec has received about 150 new claims every day. Overall, they say Quebec has welcomed 6,500 asylum seekers between January and June 30, 2017. ​Government officials said they were prepared to add new shelters if needed and that everything was under control.

But in an interview with National Observer, Jean-Pierre Fortin, president of the Customs and Immigration Union, rejected the government's "absurd" estimates, saying the numbers he's getting from agents in the field are much higher.

Representatives from both Quebec and Ottawa discussed the issue Thursday as the Montreal region continues to see a surge of asylum seekers from south of the border, including many who were flocking to a temporary shelter set up by the provincial government at the city's iconic Olympic Stadium.

"Officials are trying to downplay (the numbers of people arriving) and to reassure people but I maintain strongly that we truly are in the midst of a crisis of asylum seekers in the country," Fortin told National Observer. "It's absurd to be talking about (150 people)."

"The numbers started to explode about a week and a half ago. Agents told me about 500 people arrived on Tuesday and this morning, I confirmed with them for Wednesday (that) 600 people arrived. My numbers come from agents who are doing the work on the frontline. It's not (coming from) people in offices in Ottawa or Montreal."

A wave of migrants of Haitian origin were among the asylum seekers from about a dozen different nationalities who are now landing in Quebec from the United States. Part of the surge coincided with recent policies by the Trump administration that singled out people of Haitian origin.

Many of the border crossers have sought protection in Canada out of fear that they would be deported by the United States if they cannot prove they have all required documents to remain in the country.

The migrants have been crossing the border illegally, since they are unlikely to have their refugee claims accepted under the Canada-U.S. Safe Third Country Agreement. So the only way for migrants to have their claims considered by Canada is to set foot in the country illegally.

At a news conference in Montreal, Quebec Immigration Minister Kathleen Weil said the pace of new arrivals in the province is unusual. But she noted that Quebec has a lot of experience in dealing with this type of situation and that it has been able to respond with efficiency.

“A close collaboration between concerned ministries, partnering organizations and the federal government allows us to deploy necessary measures so that people are supported during this temporary period following their arrival until a decision is taken by the federal government," said Weil, who was accompanied by Lucie Charlebois, the junior public health minister, as well as other officials. "There is constant field work happening that demonstrates efficiency, equity and dignity for everyone involved.”

Weil added that she has been in touch with the federal immigration minister, Ahmed Hussen, on the file.

She has asked for a triage system at the border so that people who are going to a different province are sent to their choice of destination faster. She said she has also requested more resources to tackle lengthier delays and better information sharing, which ensures that the proper security and accommodation measures are in place.

Meantime, Fortin from the union suggested that the situation was unprecedented.

"I have 35 years of of service, I have worked 18 years as an agent on the field at the border and I have never seen anything like that," he said. "In the field, agents told me they were extremely tired because they are doing a lot of overtime to be able to maintain a basic level of service."

He said his union had been asking since last November for additional resources.

In the last federal budget, Finance Minister Bill Morneau announced that the government would spend an additional $20 million per year to improve support for asylum seekers.

On Thursday, the Canada Border Services Agency told National Observer that it has adequate staffing and support.

"We have ensured to have a sufficient amount of agents and necessary infrastructures to welcome asylum seekers because we're talking about significant volumes," Patrick Lefort, a CBSA spokesman, told National Observer on Thursday.

Lefort added that agents from the entire country have come to support their colleagues in St-Bernard-de-Lacolle and also the office in Montreal. He said the reinforcements would remain for several weeks.

"For now, the situation is under control even though it's a very demanding situation," he said.

Speaking at the news conference, Marc Miller, Liberal MP for the Montreal riding of Ville Marie-Le Sud-Ouest and Ile des Soeurs in Montreal, said that the federal government was working to implement some of the measures requested by Quebec.

“Our government is committing to offering protection to those fleeing war, persecution and natural disasters without compromising the safety and security of Canadians. We understand that people will go (to) extraordinary lengths to seek a safe and peaceful life for themselves and their families,” he said. “Irregular border crossings is not a new phenomenon.”

Miller also stressed that federal officials were conducting thorough criminal screening of the asylum seekers through national and international databases.

On Monday, the RCMP installed two tents, about 30 chairs and some tables as well as portable toilets to improve the comfort of its officers and asylum seekers crossing at the Lacolle border, south of Montreal. Once RCMP officers have officially arrested migrants, they are then transferred to a nearby federal customs office where their claim is processed, explained Const. Erique Gasse, an RCMP spokesman.

Emmanuel Dubourg, a Liberal MP of Haitian origin, thanked organizations from Montreal's Haitian community for their efforts and said that everyone should also look at this situation with "compassion".

Maison d'Haiti, a Montreal-based community centre that supports immigrants, said it has been helping newcomers with their applications and documents. It also anticipates more challenges will emerge soon.

"They're going to have to find permanent housing, furniture so we are coordinating with them," said Maison d'Haiti director Marjorie Villefranche. "And because there are a lot of kids arriving and September is approaching, we have to help them register the kids for school."

She said she hopes asylum seekers will get some work visas in the coming months. Once their application has been received and they are deemed eligible to be considered for refugee status, they can get financial aid from the Quebec government.

Most Haitian asylum seekers have been sent to Montreal where seven additional temporary housing centres have opened. This includes the Olympic Stadium, which has a capacity of 600 beds until September 18. Charlebois noted that the government was prepared to accommodate a mass migration and that Quebec would open additional shelters if needed.

The Quebec government said about 1,575 people are now in temporary shelters to wait for news about whether their applications will be heard. Others have moved to more permanent housing and are receiving financial aid, Quebec said.

According to Villefranche, the asylum seekers have decent living conditions at the temporary housing shelters, but she said she hopes they don't have to stay too long in these places.

"There are people with kids so it's not practical but at the same time, people took a chance by crossing the border and they weren't expecting to be received in luxury hotels either. People will have to do with the welcome they get," she said.

Between January and June, Quebec has seen more than three quarters of all illegal crossings at Canadian borders with 3,350 people intercepted by the RCMP in the province out of a total of 4,345 in the entire country, according to the Canada Border Services Agency. In comparison, Manitoba—which came second—has seen 646 illegal crossings, the agency said.

The US Department of Homeland Security has given a six-month extension and called on Haitian immigrants to make necessary arrangements and obtain travel documents “for their ultimate departure" from the United States. This means starting on January 22, 2018, Haitian immigrants could be sent home if there is no further extension. However, Secretary of Homeland Security John Kelly said he believed there are indications that Haiti “may not warrant further (visa) extension past January 2018.”

Trump wants to slash immigration by half; cites Canada as inspiration

Excellent reporting. However, an article like this raises questions and concerns for Canadian citizens - such as:
are all of the illegal immigrants immediately screened/blood tested for infectious disease and, in the case of the high reported incidence of HIV in the Haitian population - for HIV? Are the budget allocations for increased processing and financial assistance coming from within the existing Provincial/Federal taxpayer funded revenue budgets ... or will this increased policy of compassion, take away much needed funding from other priorities (and which areas will the administrations defund?). In the case of the latter, will employers who hire such illegal immigrant/processed asylum seekers - presumably at minimum wage...receive taxpayer funded tax credits or will they have increased taxes levied to counter this form of corporate welfare? The answers to these questions will help Canadians in forming an informed opinion/policy stance and social reaction.

Only just the beginning as

Only just the beginning as climate change impacts water, food and social order for people.