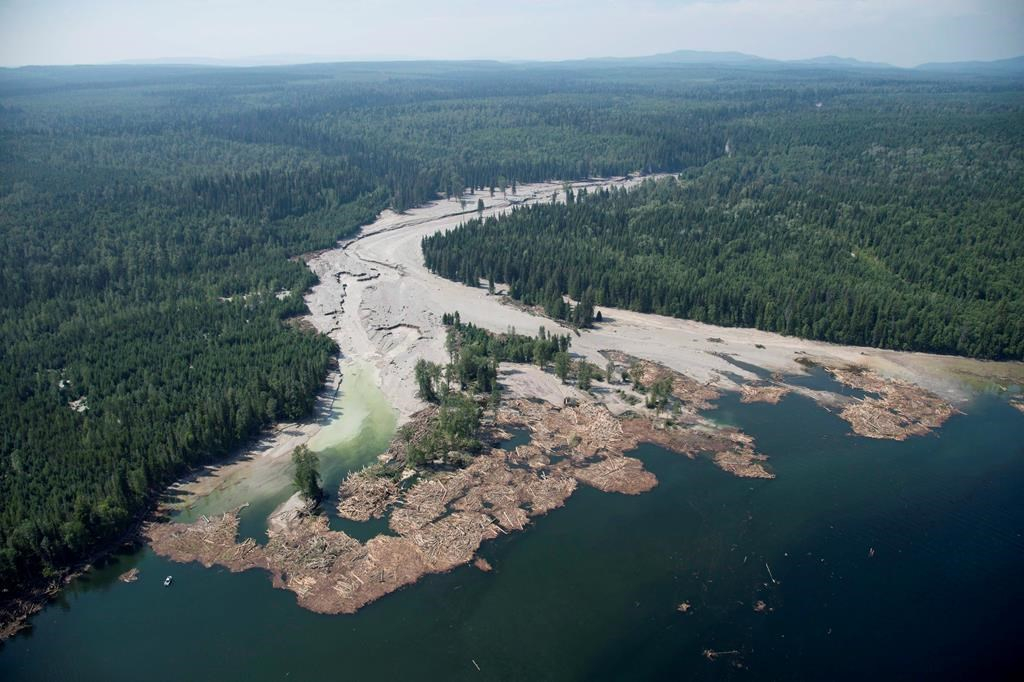 Contents from a tailings pond is pictured going down the Hazeltine Creek into Quesnel Lake near the town of Likely, B.C. on August, 5, 2014. File photo by The Canadian Press/Jonathan Hayward
Previous story
Next story

An Indigenous women has filed private charges in 2014 collapse of the tailings dam at the Mount Polley mine, days after British Columbia's government announced that provincial charges would not be laid.

Sellers was the acting chief of the Xat'sull First Nation, located near the gold and copper mine in B.C.'s Cariboo region, when the dam collapsed on Aug. 4 three years ago.

The 15 charges, filed in Vancouver provincial court under both the provincial Environmental Act and the Mines Act, come after the newly elected NDP government announced Wednesday there would be no provincial charges laid by Friday's three-year deadline.

Sellers said in a news release that she couldn't let the alleged pollution go.

"In my culture, we have a sacred responsibility not only to care for the land, waters, animals, and people living today, but also for the next seven generations to come," said Sellers, whose legal action is being by supported by MiningWatch Canada, West Coast Environmental Law, the Wilderness Committee and the First Nation Women Advocating for Responsible Mining.

"I could not bear to witness B.C. simply stepping aside and giving-up on its own responsibility to protect our shared environment and waters."

An investigation into the dam's collapse is ongoing by the B.C.'s Conservation Officer Service, but earlier this week the agency's deputy chief Chris Doyle couldn't say what stage the probe was at.

B.C. Premier John Horgan said Friday he was shocked to learn that provincial charges were not being laid.

"To have three years pass without any consequences is disturbing to me personally and, I think, disturbing for all British Columbians," he said.

However, Horgan said the federal government is very much engaged in the investigation and the province will work with federal investigators to ensure there are consequences for the events that took place.

Horgan, who was sworn in last month, said the Conservation Officer Service is limited in its resources and his government will get to the bottom of why more resources weren't brought in

"We don't have an answer to that question today," he said Friday, adding the lapse of the deadline was "profoundly unfortunate."

Attorney General David Eby said the service is working with the federal government in relation to possible violations of the Fisheries Act, which has a five-year deadline for charges to be laid.

Two reports, by B.C.'s chief inspector of mines and an independent panel of engineering experts, found the collapse involving the mine operated by Imperial Metals Corp. (TSX:III) was caused by a poorly designed dam that didn't account for drainage and erosion failures.

The federal NDP issued a statement Friday pinning the blame on Ottawa.

"It is simply ridiculous that no charges have been laid. It's time for the Liberal government to live up to their promises and restore protections for fisheries and bring real improvement to the Fisheries Act," the NDP said in a statement.

Amnesty International also issued a statement expressing its disappointment with the lack of provincial charges, in which it accused the B.C. government of playing "Russian roulette" with citizens' futures.

Imperial Metals did not immediately comment on the private charges.

Citizens can pursue private prosecution if they believe an offence has been committed, but in B.C., the court can decide not to proceed with them if it believes there is no reasonable prospect of conviction.

The charges were shelved in March, with Crown Counsel Alexander Clarkson saying the private prosecution was not in the public interest because the B.C. Conservation Officer Service, Environment Canada and Fisheries and Oceans Canada were already investigating.

The Mount Polley mine went back to full operations last year.