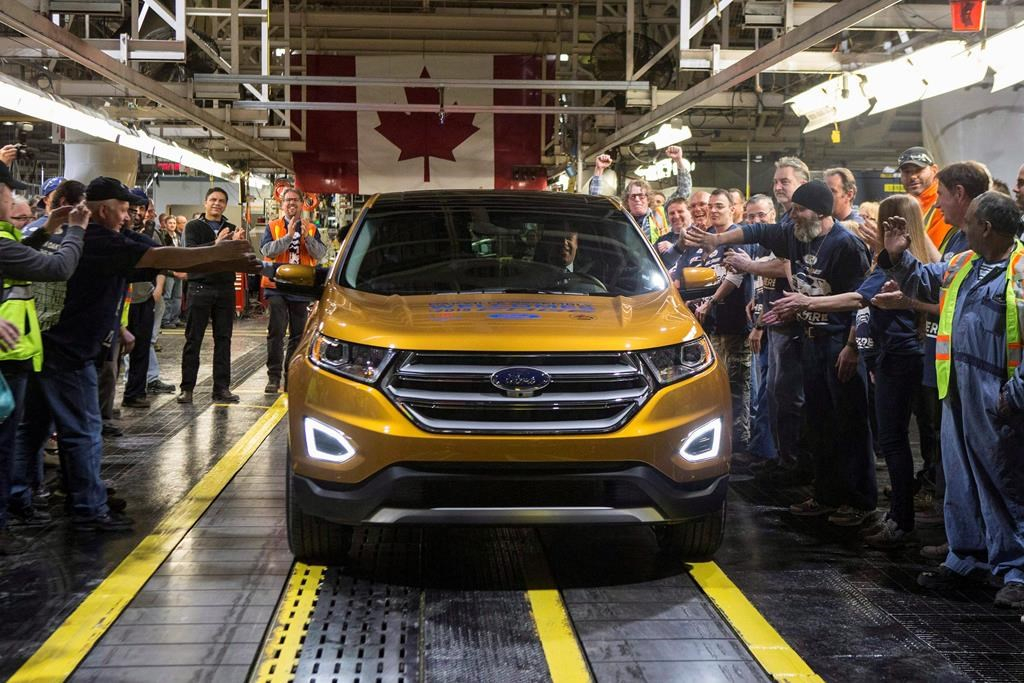 Joe Hinrichs drives the first car to the end of the production line, as Ford Motor Company celebrates the global production start of the 2015 Ford Edge at the Ford Assembly Plant in Oakville, Ont., on Feb. 26, 2015. File photo by The Canadian Press
Previous story
Next story

The future of Canada's more than one million automotive jobs has emerged as a critical part of what's at stake at the NAFTA renegotiation table in Washington after the U.S. chief negotiator targeted the sector on the first day of talks Wednesday.

U.S. Trade Rep. Robert Lighthizer opened discussions between the three countries involved in the North American Free Trade Agreement by pointing to the carnage in the manufacturing sector as the reason so many Americans view NAFTA as a failed agreement. He talked about the auto sector in greatest detail.

"Thousands of American factory workers have lost their jobs because of these provisions," Lighthizer said in his opening remarks.

He highlighted the U.S. desire for more production of parts in North America as one of the top issues in the agreement that President Donald Trump has dubbed the "worst" trade deal in history.

The U.S. proposed a higher content requirement to avoid a tariff. That would include more parts made in North America, including "substantial" U.S.-made parts.

The current rule of origin calls for 62.5 per cent of a vehicle's parts to be made in North America. The exact percentages and details of what he is asking are still unclear, but Lighthizer called for stricter monitoring to ensure companies comply with the rules of origin.

Canadian labour representatives say tougher standards would not only mean higher wages and better conditions for workers in Mexico and parts of the United States, but would also help make Canada — where wages are higher — more attractive to businesses because they would level the labour playing field.

While the dairy industry and softwood lumber grabbed headlines before negotiations opened, industry observers say it's time for new auto rules in NAFTA, which was first inked 23 years ago. Some blame the deal for the closure of four assembly plants in Canada and 10 in the U.S. Meanwhile, Mexico has gained factories in the years since the deal has been in place.

"It's important that Canada's position maintains at least as strong as it has been in the past," said University of Windsor business school professor Tony Faria, explaining that autos are a crucial part of the economy as Canada's largest manufacturing export — even larger than the oil industry.

"The industry is so large... and the taxes paid amount to billions of dollars every year."

Foreign Affairs minister Chrystia Freeland singled out the auto industry as a NAFTA success story in a speech on Monday, where she described how companies have found success using supply chains that "criss cross the borders of North America."

She pushed back Wednesday against specific national content rules of origin, saying that the rules are extremely complex and that any changes would have to be made with great care to ensure they don't disrupt supply chains.

The auto industry in particular has used NAFTA to create efficiencies in supply chains, said Brian DePratto, a senior economist at TD Bank. DePratto believes adding a minimum number of American-made parts into each vehicle could interrupt the supply chain, but it's too early to tell exactly how much that could cost.

"I think that would be a very disruptive outcome at least within the near term. It would require pretty significant realignment of the supply chain for a lot of these auto manufacturers," he said.

"Every trade deal is give and take. It's a trade off. We're going to have to give up something or an agreement will never be reached," he said.

Jerry Dias, the national president of Unifor, the union that represents auto workers, said he thinks Canada will have the upper hand in negotiations because the country is rich in coveted natural resources.

In a statement, the Canadian Manufacturing Coalition said it hopes a revised NAFTA deal will remove barriers to trade to increase efficiency, and will help increase exports of North American made products to countries outside the agreement. It said NAFTA would need to address regulatory practices, currency manipulation and trade subsidies in other regions.

“We need a trade agreement that will advance manufacturing and trade in North America," wrote Dennis Darby, the Chair of the CMC.

"Modernizing NAFTA could be the catalyst this region needs to come together and compete with the world."