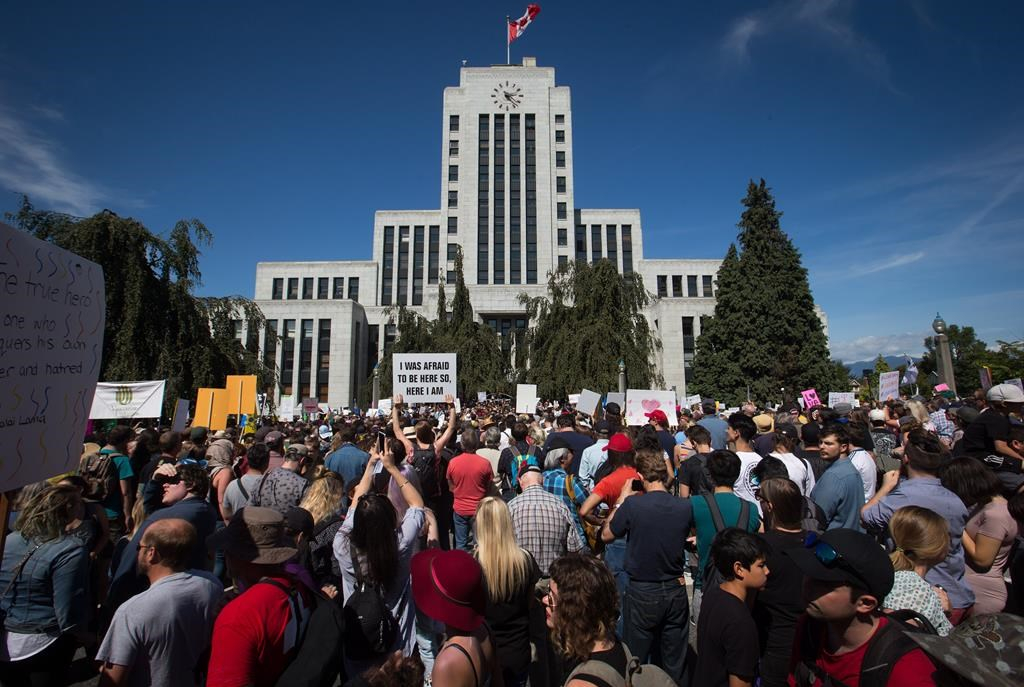 Messages of love, tolerance and understanding were shared by thousands of people who gathered on Saturday to protest racism and hate.

Signs reading "live with love," "diversity = strength" and "laundry is the only thing that should be separated by colour" were spotted above a packed crowd outside Vancouver's city hall.

Police said about 4,000 people attended the rally. The large number of people caused officers to close a busy road in the area to vehicle traffic for several hours.

Bob Chamberlin, vice president of the Union of British Columbia Indian Chiefs, told those gathered that he draws strength from seeing so many people come together with love and respect.

Now is a critical time in Canadian history, he added, and all Canadians must stand together for reconciliation with First Nations to be successful.

Vancouver Mayor Gregor Robertson told the protesters that the city will not stand for hatred or inequality, but noted work still must be done to spread the message of understanding.

"There's more to do, we're not done," he said. "There are some among us here today who have not learned the message of peace and respect and understanding, of loving one another regardless of what we believe in or who we love or what we look like or where we came from."

Robertson urged those assembled to approach the difficult conversations peacefully.

There were reports earlier this week that an anti-Islam protest was planned, but it never materialized.

A handful of individuals opposing the anti-racism protesters showed up at the rally and were quickly ushered away by police when verbal confrontations appeared as though they could become physical.

Vancouver Police said Saturday afternoon that officers at the rally arrested five people for breaching the peace and two people were escorted away from the area "to prevent a disturbance."

Police said there were no reported assaults or injuries.

Prime Minister Justin Trudeau took to Twitter to congratulate Vancouver on the event, saying "Diversity will always be our strength."