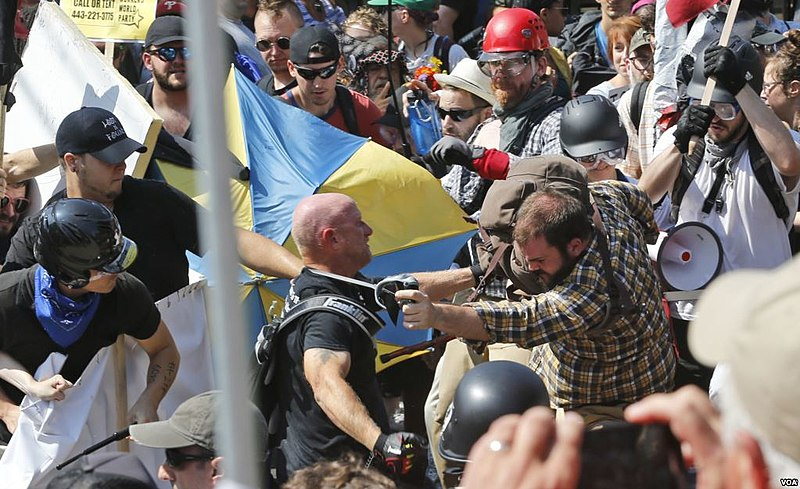 The Canadian Security Intelligence Service is expressing concerns about far-right extremism in the wake of a racially motivated protest in Charlottesville, Virginia that turned deadly.

A spokeswoman for the Canadian spy agency made the comments in response to questions from National Observer about reports that some Canadians participated in the Charlottesville protests, alongside neo-Nazis, Ku Klux Klan members and other white supremacist extremists.

A 32-year old woman, Heather Heyer, was killed in Charlottesville after a car drove into a group of anti-racists. A 20-year-old man from Ohio who is believed to have Nazi sympathies, James Alex Fields Jr., has been charged with second degree murder in connection Heyer's death.

“Any group or individual who sees violence as a legitimate form of political expression, including those who support right-wing extremism, is of concern to us,” said Tahera Mufti, the CSIS spokeswoman.

"As you can appreciate, I cannot discuss the precise nature of our investigations due to national security reasons; however, I can confirm that CSIS is working closely on this matter with its domestic and international partners, including the law enforcement community."

CSIS has published reports in the past that focus on the threat of terrorist travellers. The agency also features a warning on its website about 180 terrorist travellers, including about half who are believed to be in Syria and Iraq. It has previously dismissed concerns about domestic far-right extremists as not being "as significant a problem in Canada." Instead, its public warnings about extremist travellers generally focus on travel to the Middle East and Daesh.

Criticism of CSIS and other Canadian security and law enforcement agencies for failing to keep up with threats from far-right extremists came sharply into focus last winter after six people were killed and 19 wounded by a lone gunman who went on a mass shooting spree inside of a Quebec City mosque on Jan. 29. Alexandre Bissonnette, 27, was arrested after the shooting and faces multiple charges of first degree murder.

One survivor of the shooting, Said Al Amari, who was shot twice, told CTV news in May that police failed to adequately address warning signs, including a threatening package with a pig's head that was sent to the mosque a few months before the attack.

A few months later, three Canadians were filmed in a Vice News documentary and appeared to be participating at some of the demonstrations that turned violent in Charlottesville alongside white supremacists and neo-Nazi groups on the weekend of August 12, 2017.

Two of the three Canadians were identified in media reports: Shawn Beauvais-McDonald and Vincent Bélanger-Mercure. Beauvais-McDonald is a member in charge of recruitment and moderator of the English-speaking Facebook page of the extreme-right group La Meute, and Bélanger-Mercure is a 30-year-old Montrealer who has denied being a white supremacist but explained to La Presse that “the most beautiful ideologies and creations” come from white men.

All Canadian agencies and police forces contacted by National Observer regarding the Charlottesville protests declined to comment on the specific cases.

But a national organization that represents Canadian Muslims appears to have little confidence that Canadian authorities will crack down on far-right extremists. It also has doubts about whether Canadian agencies and police treat far right extremists with the same scrutiny applied to Canadians of Muslim faith.

"Muslims who aren’t in any way associated to extremism are being affected by watch lists, whereas the Charlottesville case illustrates that those Canadians who are not Muslim, who are participating in extremist rallies, appear not to be a concern and therefore not subject to any scrutiny or to any potential legal consequences," said Amira Elghawaby, spokeswoman of the National Council of Canadian Muslims, in an email to National Observer.

“If a Muslim in Canada were to travel abroad to participate in extremist demonstrations, and was captured on film endorsing the extremist ideology and violent actions, such a person would be viewed by intelligence and law enforcement presumptively as a danger to national security in Canada and possibly as having already committed a criminal offence. They would likely be immediately placed on a watch list."

The concerns raised by Elghawaby follow a series of revelations that have prompted questions about the priorities of Canada's law enforcement and intelligence agencies.

A recent National Observer investigation revealed examples of how Canadian law enforcement security officials are working with energy companies to keep tabs on environmentalists and Indigenous groups who are opposed to unsustainable resource development. The spy agency has also responded to allegations from a $35 million civil suit of Islamophobia and homophobia within its ranks by stating it has no tolerance for harassment, bullying or discrimination.

Last February, former RCMP commissioner Bob Paulson told a Senate committee that a "caustic" tone in political debates was to blame for attracting, agitating and radicalizing people of all persuasions. He said the extreme right threat was of concern to police, but that it was not yet overtaking what he described as the classic terrorism threat.

Scott Bardsley, a spokesman for Public Safety Minister Ralph Goodale, defended what he described as Canada's "robust" measures to crack down on hate crimes.

"Hate speech and hate crimes are intolerable in Canada. Canada’s national security and law enforcement agencies take all security threats very seriously, including those posed by right-wing extremists, and have robust measures in place to address them," Bardsley wrote in an email to National Observer.

He added that the government is fighting extremism through different initiatives. For example, it has developed efforts to counter radicalization in all its forms at the new Canada Centre for Community Engagement and Prevention of violence. The budget for the centre in 2016 was of $35 million over five years and $10 million annually thereafter. Another initiative aims to “help not-for-profit institutions in at-risk communities make security improvements” with double funding in Budget 2017 for the Security Infrastructure Program.

Bill C-51, also known as the Anti-Terrorism Act, introduced in 2015 enables the Minister of Public Safety to add a person to the “no fly” list when he has reasonable grounds to suspect this person will “travel by air for the purpose of committing an act or omission that is an offence under certain sections of the Criminal Code, including participation in an activity of a terrorist group, facilitation of terrorist activity, or the commission of an offence for a terrorist group.”

In response to questions from National Observer, all agencies declined to say whether the Canadians who participated in far-right extremist demonstrations in the U.S. could have their passports revoked or be added to the “no fly list”.

“Criminal Code charges, being listed under the Passenger Protect Program, or having one’s Passport cancelled or revoked are all possible consequences should an individual leave or attempt to leave Canada to commit certain terrorism offences. However, the manner in which these offences are investigated and responded to is determined based on the details of each case, as appropriate. The Government of Canada cannot comment or speculate on how any of these laws or regulations may or may not apply in any particular case,” wrote Jean-Philippe Levert, a spokesman at Public Safety Canada.

Bardsley, from Public Safety Minister Goodale's office, said that the no-fly list was made up of people who represented threats, and was not based on their ideology.

Meantime, in the home town of at least one Canadian participant in the Charlottesville protests, a Montreal police commander told National Observer in an interview that law enforcement is watching far-right extremists who post messages on public forums online.

"They are people who repeatedly post blogs or comments on social media on a daily or weekly basis, and these people are known and there is a level of vigilance on what they are writing, (and) on whether they plan to participate in a protest or not," said Caroline Cournoyer who is commander of the hate crimes unit at the Montreal police department. "But naturally, not everything is written and posted on social media."

She also said that Montreal police partners with the RCMP, the Sûreté du Québec, along with other police forces and governmental agencies on important cases to protect national security.

A former intelligence officer, Michel Juneau-Katsuya, who was responsible for the CSIS unit monitoring extreme-right members in the mid-1990s, is concerned about the trends. He said right-wing extremism could become much more of a threat to national security than Islamic extremists.

“You have a double standard that has been and is being applied,” he said. “Some people might argue that it’s because they (far right extremists) haven’t targeted people but it’s just a matter of time.”

In a meeting of the Standing Senate Committee on National Security and Defence in 2014, the chief of the division of investigations on extremist threats at the Sûreté du Québec — the provincial police force — said the “majority of the service’s active files (dealt) with the extreme right”.

A study of right-wing extremism in Canada published in 2015 in the journal Studies in Conflict & Terror found at least 100 such groups operating in the country, especially in Alberta, British Columbia and Quebec. They also documented hundreds of incident which have unfolded between 1980 and 2015.

Juneau-Katsuya said the government was focusing too much on Islamic terrorism instead of adapting to the situation being observed on the ground, which highlights other threats.

Public Safety Canada’s 2016 public report on the Terrorist Threat to Canada focused mostly on Islamic terrorist groups such as Daesh and CSIS’s website states that right wing extremism has not been as significant a problem in Canada in recent years.

“I think the government and the authorities have to reassess to a certain extent what goes on (on the ground) ” said Juneau-Katsuya. “I’m extremely critical of the lack of action from the government because they will be responsible for what we will have to deal with later because these people are poisoning the mind (...) if there’s a critical mass and as they encourage each other through their discourse, you will have sporadic but deadly actions like we saw in Charlottesville.”

The financial records of

The financial records of these organizations must be audited, just as Canadian charities were harpooned!

CSIS are the far right.

CSIS are the far right. Express concern, whatever.

Right wing extremism is definitely alive and well in Canada. Much of the time it is supported financially by wealthy conservative folks who choose to be willfully ignorant of what is really going on. If you want an example, just look at those running away from the Rebel media outlet right now. And think about the devastating silence from the fundamentalist Christian folks at the moment.