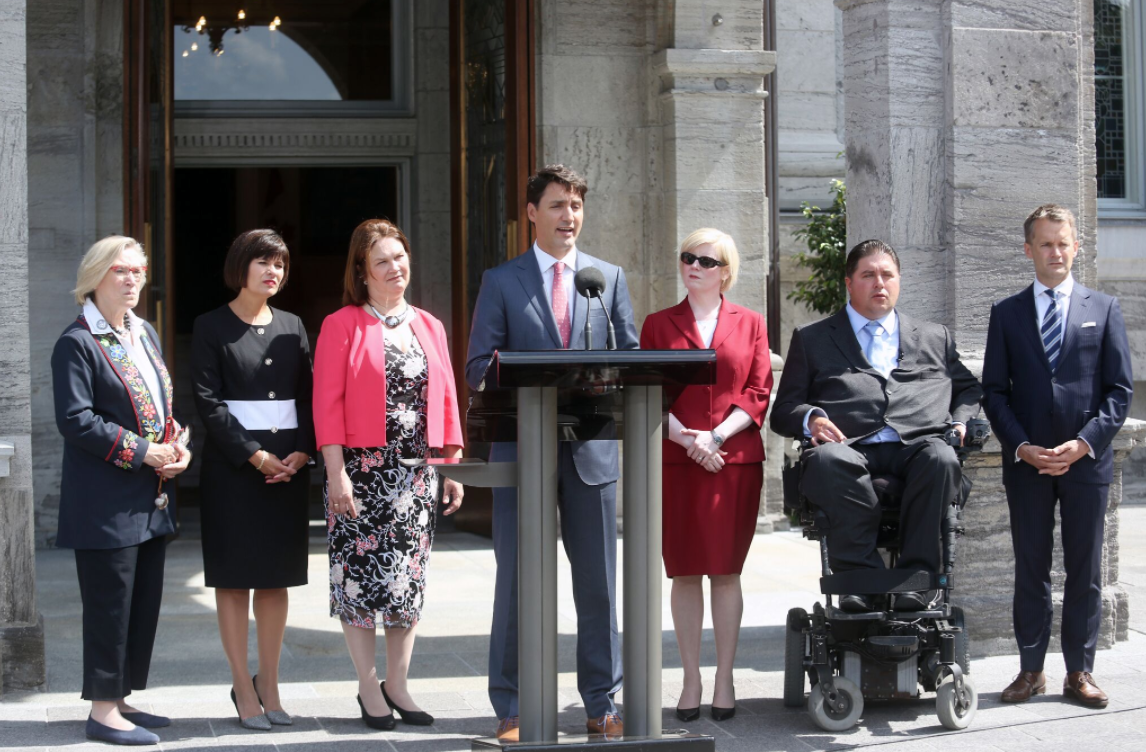 The decision to separate Indigenous and Northern Affairs Canada (INAC) into two departments, he explained, is part of the federal government's effort to tear down colonial structures that prevent it from achieving true reconciliation.

Trudeau said the creation of two ministries — each with a more specialized focus than its predecessor — will strengthen the government's ability to make good on a benchmark election promise to renew nation-to-nation relations with Indigenous peoples. The move comes at a time when the Liberal government is facing mounting criticism over its efforts to promote reconciliation with Indigenous people.

"There's a sense that we've pushed the creaky old structures around INAC about as far as they can go," Trudeau told reporters outside Rideau Hall in Ottawa. "This is something we take very, very seriously and this is the next step in building a future in which Indigenous and non-Indigenous Canadians have the same kinds of opportunities and everyone's rights are fully respected and understood."

The prime minister has said that the Canada's relationship with Indigenous people is the most important one to his government, but critics have accused his cabinet of failing to follow through on key pledges, including implementation of all recommendations from the Truth and Reconciliation Commission that investigated decades of abuse under the residential school system. His office's national inquiry into missing and murdered Indigenous women and girls (MMIW) has also been widely criticized — plagued with staff resignations and lengthy delays.

Asked if the division of INAC was an attempt to start afresh amidst these challenges, Trudeau responded: "On the contrary." The decision follows a recommendation from the Royal Commission on Aboriginal Peoples, he explained, which suggested new structures more than 20 years ago that would dramatically improve service delivery.

It's one step closer to ending the controversial Indian Act, Trudeau added, pointing to spring 2018 as a rough date for introduction of legislation that will formally split up INAC. Mandate letters for the new positions will be released publicly in the weeks ahead.

Until then, Bennett's new focus will be on developing a framework that entrenches recognition of Indigenous rights in all government operations. Philpott will focus on improving socioeconomic outcomes for First Nations, Métis and Inuit peoples through the delivery of health, mental health, education, and financial programs.

Over time, both new departments will support Indigenous people in moving towards self-government.

NDP Indigenous affairs critic Romeo Saganash congratulated the new ministers and offered to collaborate with them on fixing Canada's "broken relationship with Indigenous peoples." At the same time, he told National Observer in a statement that Trudeau's move appeared to confirm that the government was failing at this task.

"The splitting of these Indigenous-related files is an acknowledgement that the Liberal government has so far failed to comprehensively address the formidable challenges Indigenous communities face in Canada," said Saganash, who represents the northern Quebec riding of Abitibi-Baie-James-Nunavik-Eeyou in parliament.

Other shuffles on Monday afternoon include Kent Hehr, former veteran affairs minister and associate minister of national defence, who will take over as minister of sport and persons with disabilities.

Carla Qualtrough, previously the sports minister, moves over to public services and procurement to replace the retiring Judy Foote, who resigned from federal politics and her cabinet position late last week. Foote cited family health issues as the primary reason for her departure, including two bouts with cancer over a 20-year career in elected politics. She had been on temporary leave from her cabinet post since April, with Natural Resources Minister Jim Carr covering her duties on an interim basis.

Qualtrough will now take over from Carr in leading the troubled department, which has left thousands of federal employees without paycheques due to complications with the government's Phoenix pay system. More than 200,000 individual cases still require resolution, CBC has reported, and PSPC is looking at a $400-million tab to fix the automated national system.

The shuffle also added two new Liberal faces to the mix. MP Ginette Petitpas Taylor of New Brunswick will be taking over for Philpott as health minister, and her colleague from Newfoundland and Labrador, Seamus O'Regan, will become the minister of veterans affairs and associate minister of national defence.

O'Regan, who represents St. John’s South—Mount Pearl, is a former journalist with 10 years of national reporting experience and has previously served as ministerial assistant both federally and provincially. He has a master's degree in philosophy from Cambridge University and is an ambassador for Bell Let's Talk, an international campaign that aims to eliminate stigma surrounding mental illness.

O'Regan's appointment to the position has raised some eyebrows in Ottawa. The rookie MP has a history of alcoholism, and spent 45 days between December last year and January this year in a rehabilitative wellness program. He has previously told reporters that he never raised his struggle with alcohol during the 2015 election campaign because he didn't know at the time that he had a problem.

The MP is also known for being a close personal friend of Trudeau's, having joined the prime minister on a hotly-debated holiday last Christmas to a private island in the Bahamas owned by the Aga Khan. That vacation is currently under investigation by the federal ethics commissioner over conflict of interest concerns.

Asked minutes before the cabinet shuffle what he thought of his elevated position as veterans affairs minister, O'Regan quipped, "For once, I'm speechless."

During a scrum, Trudeau defended O'Regan's ability to do the heavy-lifting of a cabinet minister, and his decision to appoint him despite their close personal relationship. Asked about the MP's "road to recovery," however, Trudeau failed to describe precisely what steps he had taken to ensure O'Regan is up for the task after his stint at the wellness centre.

"In regards to Mr. O’Regan, I’m proud of the work that he’s done as a Member of Parliament, the strong voice he’s been for Newfoundland amongst many strong voices from Newfoundland and Labrador, and I’m excited about the team we’re putting forward today," he said.

"Any time we appoint someone to cabinet, we ensure that they are going to be more than capable of fulfilling all the responsibilities that Canadians expect of them, and every single one with me here today has – has demonstrated that."

Trudeau said his government's "engagement with Indigenous peoples was very much looked at in a paternalistic, colonial way,"

The problem is that these new ministers can change things, but retain old habits and ideas of the "paternalistic, colonial way." Trudeau's goal has always been the assimilation of indigenous —"taking the Indian out of the Indian." Period. The goal of the ministers is likely to move ahead on this assimilation track while trying to make the changes look like something other than assimilation. That will be a huge task for these two very bright women. Sadly.