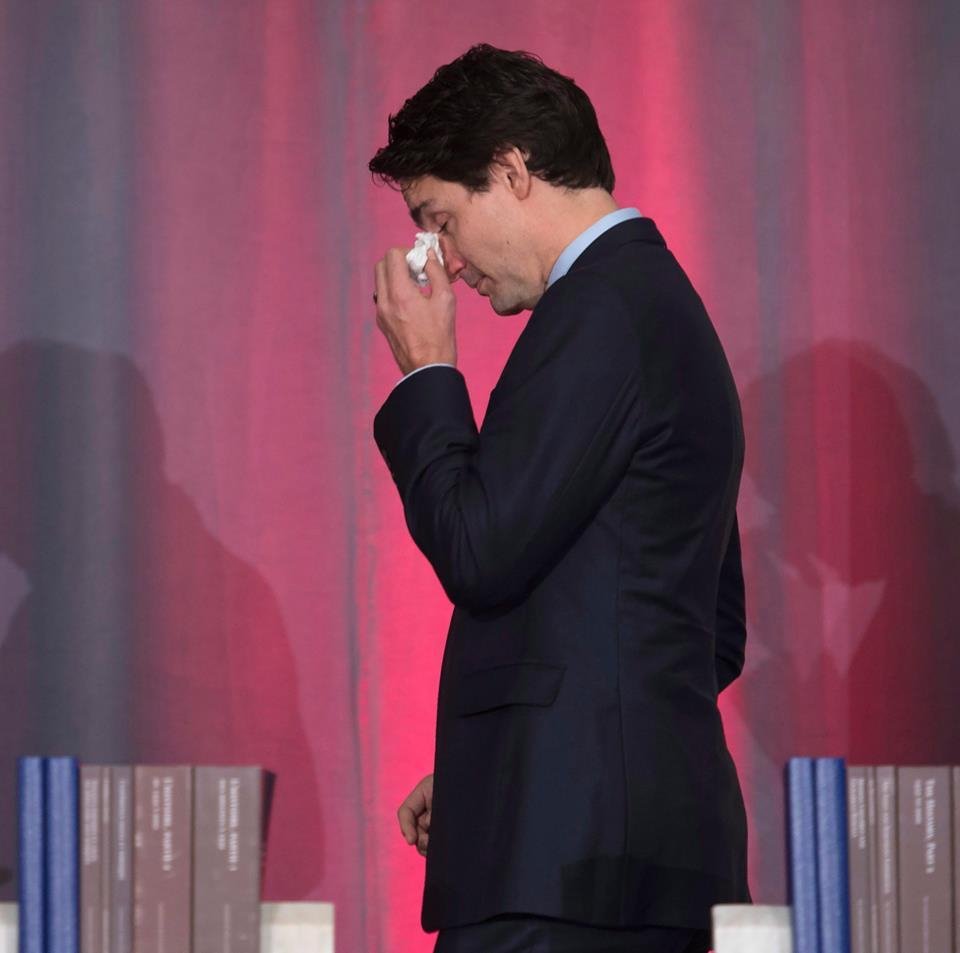 Prime Minister Justin Trudeau tears up after speaking about the Truth and Reconciliation commission's final report on Dec. 15, 2015. Photo by Canadian Press
Previous story
Next story

The Trudeau government is retreating from a key promise to be more up front with Indigenous groups who are taking it to court.

The promise would have required the government to publish legal opinions it received regarding Indigenous and treaty rights, and could directly affect the dynamics of court challenges for major energy projects such as Kinder Morgan’s Trans Mountain expansion and Enbridge’s Line 3 replacement pipeline projects, as well as B.C.’s Site C hydroelectric dam.

This pledge was among 94 calls to action made by Canada’s Truth and Reconciliation Commission in 2015 following its investigation into the country’s infamous residential schools program. Prime Minister Justin Trudeau’s Liberals, while in opposition, promised to implement all of these recommendations once in government as part of a commitment to improve Canada's relations with Indigenous people.

Breaking the TRC's call to action

The residential schools were created in the 1840s and lasted until the 1990s, separating Indigenous children from their families in an attempt to eradicate their culture and assimilate them into mainstream Canada. All of the commission’s recommendations were meant to deliver on full reconciliation between the Crown and indigenous people, ensuring that mistakes of the past are not repeated.

In its final report, the commission noted that governments in Canada at the federal and provincial level often see their relationship with indigenous people as "adversarial."

Repairing that relationship should involve more transparency in court, the commission concluded: "Canada’s Department of Justice must be more transparent and accountable to Aboriginal peoples; this requirement includes sharing its legal opinions on Aboriginal rights."

The commission's report noted that this is already done in the U.S., where the Department of the Interior and Bureau of Indian Affairs publish legal opinions related to indigenous issues.

The recommendation was one of 94 from the commission that Trudeau promised to implement after the election.

But a spokesperson for Justice Minister Jody Wilson-Raybould told National Observer that some of the legal opinions must remain confidential to protect solicitor-client privilege.

“Openness and transparency are core commitments of the government and we are working on a solution that respects the spirit of the recommendation,” spokesperson Valérie Gervais told National Observer in a recent email.

Gervais also noted that the government makes its opinions public in Parliament or when it appears in court.

"So much for transparent government"

"This is so typical of any government promises," Patrick Madahbee, the Grand Council Chief of the Anishinabek Nation, told National Observer in an email. "So much for transparent government. Often whoever is in opposition become hypocrites because they end up doing the same thing or a variation of the very thing they criticize."

MP Charlie Angus, the NDP critic for Indigenous and Northern Affairs, has been pressing the government to show more transparency. He said the government's position was not good enough.

This will hurt him. The

This will hurt him. The natives of Canada can be a powerful enemy especially when they feel that they have been lied to.

Why am I not surprised? Has

Why am I not surprised? Has he kept ANY promises he made to get elected? At this rate, we'll never see a B.C. North Coast Crude Oil Tanker Moratorium. And who knows? Probably scheming away right now to get the Northern Gateway Pipeline shoved down our throats.
What a HUGE disappointment!