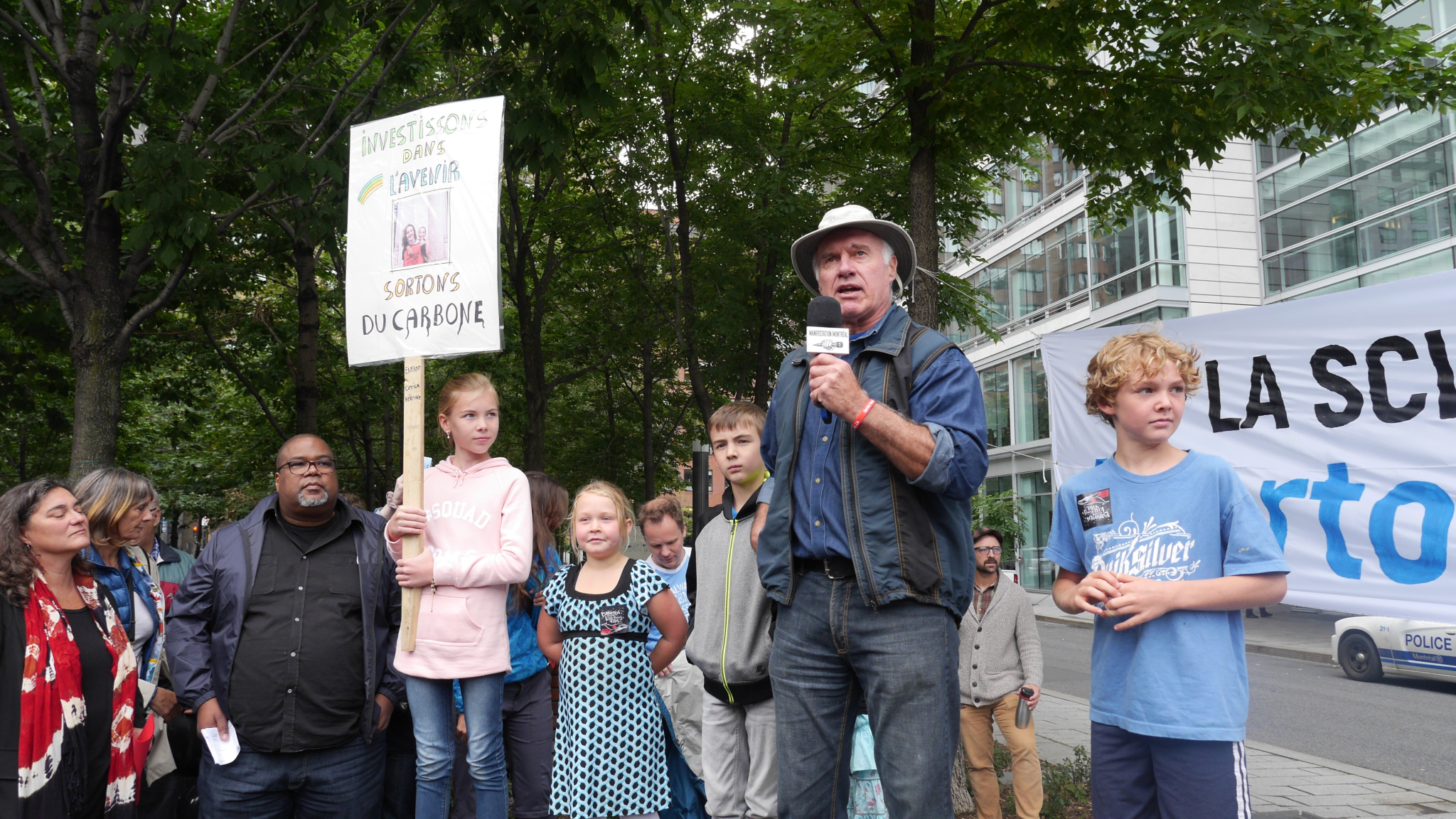 Pierre Prudhomme, a pensioner, speaks during a rally asking Caisse to divest from fossil fuel energy in Montreal on Sept. 8, 2017. Photo by Clothilde Goujard
Previous story
Next story

After several weeks of deadly natural disasters that have put climate change in headlines all over the world, hundreds of Montrealers are calling on one of the world's largest investors to divest from fossil fuels. ​

More than 300 people participated in a rally Friday demanding that La Caisse des Placements et Dépôts du Québec remove all of its assets, including stocks, bonds and investment funds, from companies involved in extracting fossil fuels like coal and oil.

La Caisse des Placements et Dépôts du Québec is the second biggest institutional investor in Canada for major public pensions in Quebec. As of June 30, the Montreal-based company held $286.5 billion in financial assets — roughly $17 billion of which are in fossil fuels, according to the environmental group Recycle ta Caisse.

Greenhouse gas emissions created from burning fossil fuels is a primary driver of climate change. Research published Thursday in the scientific journal Climate Change suggested that emissions from the world's top fossil fuel producers are responsible for up to half of the global surface temperature increase.

Montreal is currently hosting meetings for the International Panel on Climate Change (IPCC), which pools the academic expertise of 195 member states to deliver climate science assessments to governments and policy makers.

“We are currently in Montreal where the top scientists on the planet have come here to tell us that governments are dragging their feet," Greenpeace Canada campaigner Patrick Bonin told a cheering crowd in French outside Caisse's downtown office.

“That the Harveys, the Irmas, the forest fires we’re seeing in the West, like the flooding like we’ve had here, and the storms we’ve had in the lower St. Lawrence River region — we’re going to have more if we don’t do anything. We're going to rise up like what we did to shale gas, like what we did yesterday with TransCanada which backed (off of Energy East) — we’re going to get Caisse to divest of fossil fuels energy.”

Recycle ta Caisse has tallied the investor's assets tied to fossil fuel energy since 2014, and said its new total of $16.7 billion in oil, coal and natural gas investments represents a 26.5-per-cent increase from 2015. Its spokesperson, Sebastien Collard, has a pension fund with Caisse and said he is not alone in his outrage that his fund, and those of thousands of Quebec state employees, are being invested in fossil fuels.

Since 2014, Collard has been fighting to get Caisse to change.

“I have three children and I can’t leave things like that,” the neuropsychologist told National Observer. “It doesn’t make any sense… Investments are a very important lever that can change things so that’s why we have to tackle (this problem at Caisse).”

Caisse did not speak with protesters on Friday, but told National Observer that it is looking into its fossel fuel investments to explore next steps, and would announce a "position" soon. A spokesperson declined to provide a time frame.

“Despite the signature of the Paris accord, we’ve seen a massive increase in Caisse’s investments, among other things in pipelines, in TransCanada, in Enbridge, in tar sands, even though we have to divest from them, like more than 750 organizations in the world have done," said Bonin.

Pension funds in Norway and Sweden have stopped investing in oilsands and pipelines, he added. The Second Swedish National Pension Fund, one of the five funds in Sweden's pension system, and Kommunal Landspensjonskasse, a Norwegian county and municipal pension fund, are examples. They have completely divested from fossil fuel energy according to Fossil Free, an international network of campaigners tracking organizations' investments.

"Now, here with Caisse, we need to increase pressure because there’s $16 billion invested (in these fields), and we want it to invest in renewable energy, in public transport, in electrification of transport, in solutions that respect the Paris accords," said Bonin.

Pierre Prudhomme, a pensioner and grandfather of four from Laval, a city north of Montreal, said the situation keeps him up at night.

“The fact my money is being used to compromise the life conditions of our children, grandchildren and future generations — I find it blatantly immoral and unacceptable. With the science we have today, I find it criminal when we continue to increase investments in this domain,” he told National Observer.

After addressing the crowd, Prudhomme said several other pensioners thanked him for speaking about his fight for future generations.

“When I contributed to my pension, it was to ensure my security, but when we use this money to favour the insecurity of future generations, it’s close to misappropriation of funds,” he said.

Bonin and Collard said citizens need to keep pushing Caisse to impose a moratorium on their investments in fossil fuel energy.

More than 300 protesters gathered outside the downtown office of La Caisse des Placements et Dépôts du Québec on Fri. Sept. 8, 2017, to demand that the investment giant rid itself of assets tied to fossil fuels. Video by Clothilde Goujard

Editor's Note: This story was updated at 1:35 p.m. Eastern Time on Tues. Sept. 12, 2017 to correct an error in its video content. The previous video incorrectly identified Dominique Daigneault, president of the Conseil Central du Montreal Métropolitain as Lucie Piché, president of the unions of CEGEP teacher. National Observer regrets the error.