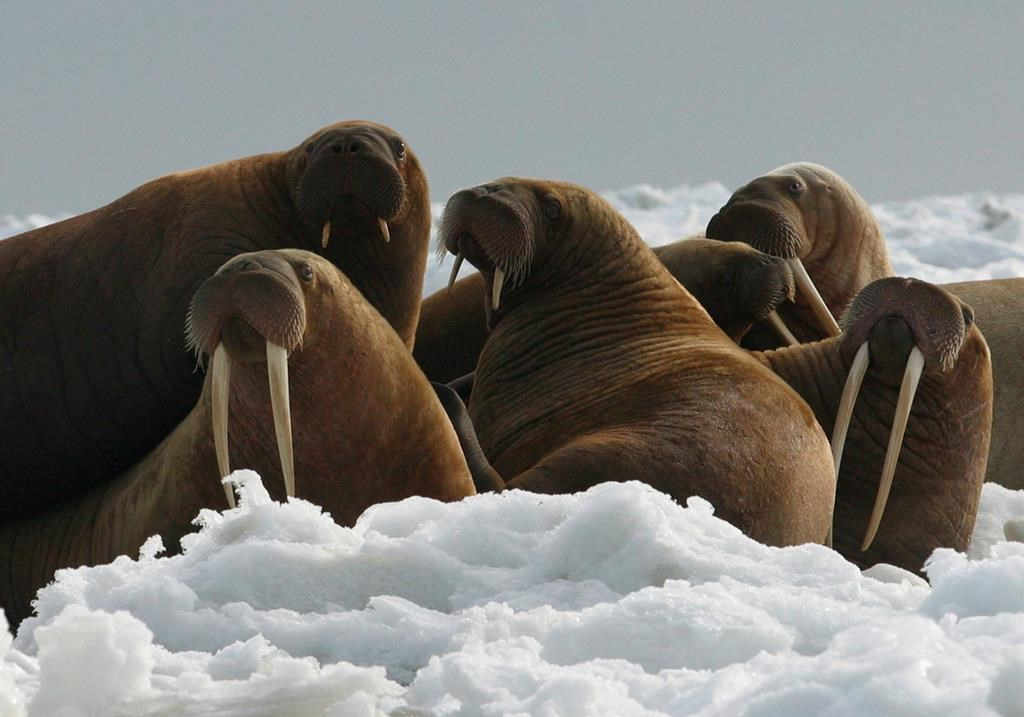 An environmental activist is calling on the U.S. Fish and Wildlife Service to reconsider placing anchored rafts in the ocean as resting platforms for walruses after stampedes killed 64 animals on Alaska's northwest coast.

Rick Steiner, an environmental consultant and former University of Alaska marine conservation professor, pitched the idea two years ago. The Fish and Wildlife Service concluded it didn't have the money or manpower to provide artificial resting platforms that might give a few walruses relief but not benefit the population as a whole in the absence of ice in the Chukchi Sea.

Steiner said he's again asking the agency to take the lead in a raft pilot project because sea ice continues to diminish and artificial platforms could provide alternatives to huge herds gathering on the Alaska coast.

Fish and Wildlife Service spokeswoman Andrea Medeiros said the raft suggestion was thoroughly reviewed in 2015 and the agency position has not changed.

Walruses dive hundreds of feet to eat clams and other mollusks on the ocean floor, but they cannot swim indefinitely. Historically, sea ice has provided a platform for female walruses and their young to rest, nurse and dive north of the Bering Strait.

In recent decades, however, sea ice has diminished due to global warming. The ice in late summer has receded far beyond the shallow continental shelf, over water more than 10,000 feet (3,050 metres) deep — too deep for walruses to reach the ocean bottom.

Instead of staying on sea ice over deep water, walruses have gathered in Russia and Alaska, with 35,000 or more animals sometimes packed shoulder to shoulder on a beach. If a herd is spooked by a polar bear, hunter, airplane or boat, calves can be crushed by mature females weighing more than a ton.

With the amount of carbon in the Earth's atmosphere and oceans, Steiner said, the loss of sea ice will continue. He proposes a pilot project of perhaps three rafts anchored a few miles off Point Lay and 80 miles offshore at Hanna Shoal, an important walrus feeding area.

Giant fuel barges are readily available for sale or lease that could be painted white to simulate large pan-ice floes, outfitted with artificial turf and lowered with seawater in their ballast tanks to a level where walruses could pull themselves up with their tusks, as they do with sea ice, Steiner said.

Former Fish and Wildlife Service regional director Geoffrey Haskett said in his response to Steiner in 2015 that the agency's two major management concerns were disturbances to walruses on shore and stress placed on them by having to swim greater distances from the coast to feeding areas.

The agency and Point Lay residents have combined to discourage flights and hunters near herds that could cause stampedes. Steiner called the effort heroic but "simply not enough."