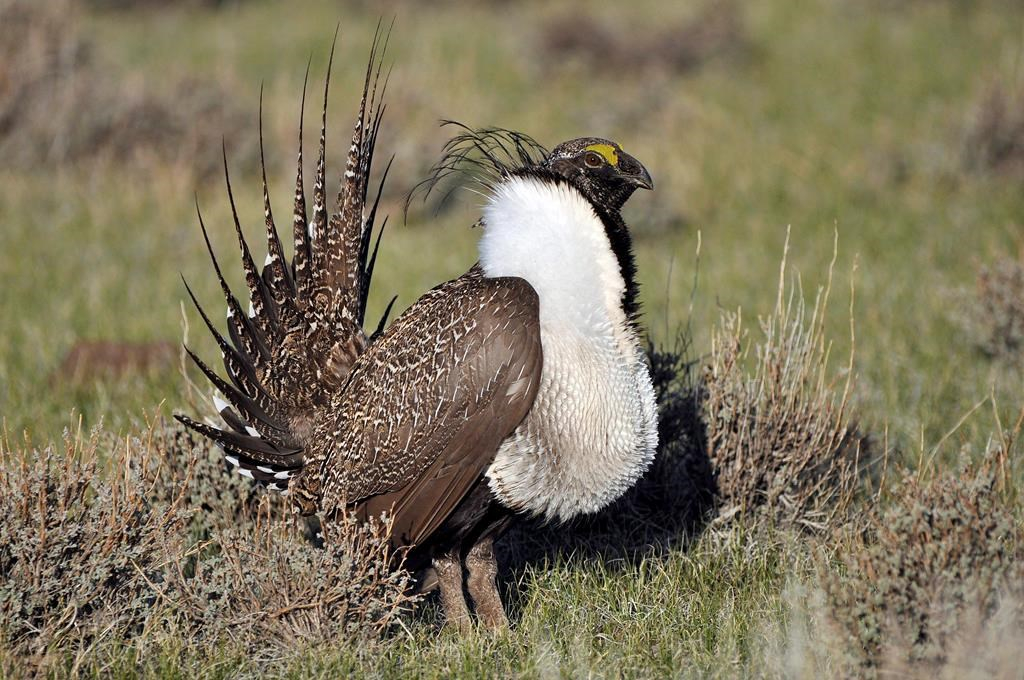 This March 1, 2010, file photo provided by the U.S. Fish and Wildlife Service shows a greater sage grouse male strutting to attract a mate at a mating ground, near Bridgeport, Calif.
Previous story

Biologists have made a discovery on a swath of native grassland in southwest Saskatchewan that they are calling exciting, but are also hesitant to talk about.

Mike Burak, with the Nature Conservancy of Canada, says the group has found endangered greater sage grouse on a 1,222 hectares conservation area known as the Wideview Complex, next to Grasslands National Park.

"We found a couple of individuals in a couple of different places on the property," Burak said in an interview with The Canadian Press.

"We're not going to release which parts of the property we did find them on, just because we don't want to give any more away then we really have to. But because they are a critically endangered species, it is something to celebrate that we have found them and they are using the property as habitat."

Environmental groups have warned that the greater sage grouse is in danger of becoming extinct in Canada.

Last year, it was reported that numbers of male greater sage grouse have almost quadrupled since 2014, with nearly 80 male birds being counted in southern Alberta and Saskatchewan — up from 20 male birds counted in 2014.

"Ultimately, we've decided to put it out there that we've found them and hope that people will respect that and not do anything inappropriate, and not try to get to close to them or to go out there during inappropriate times of year, like during the spring when they're breeding or during the nesting season, to disrupt them."

The Nature Conservancy of Canada announced the new conservation area back in March, but it was too cold to assess species at the time.

A lot of the species that would use the property through the spring and summer would have migrated away to the southern United States or even South and Central America, said Burak.

"We needed to wait until everybody was kind of back up here in Canada and set up for the breeding season before we actually go out there and look for them, just because they don't hang around through the winter," he said. "They kind of leave and then they come back up here to nest."

When researchers did get out to the property, they identified 10 different species that are either listed under the federal Species At Risk Act or that have been assessed by the Committee on the Status of Endangered Wildlife in Canada on the property.

That includes threatened birds such as Sprague's pipit, loggerhead shrike and common nighthawk.

"I was very surprised that there was a pretty wide variety of species that like really short, heavier grazed grass and then a few hundred metres away from that, you'd have a thicker stand of grass which would have species ... which like taller, thicker grass," said Burak.

"It's not very common to find that kind of a variety in close proximity to each other, so we were just really happy with the different individual habitat types that we were finding."

He says the findings will be reported to the federal government, which helped fund the purchase of the land, and the provincial government so that it can help track species.

By Associated Press | News, US News, Politics | August 8th 2017
State Of The Animal