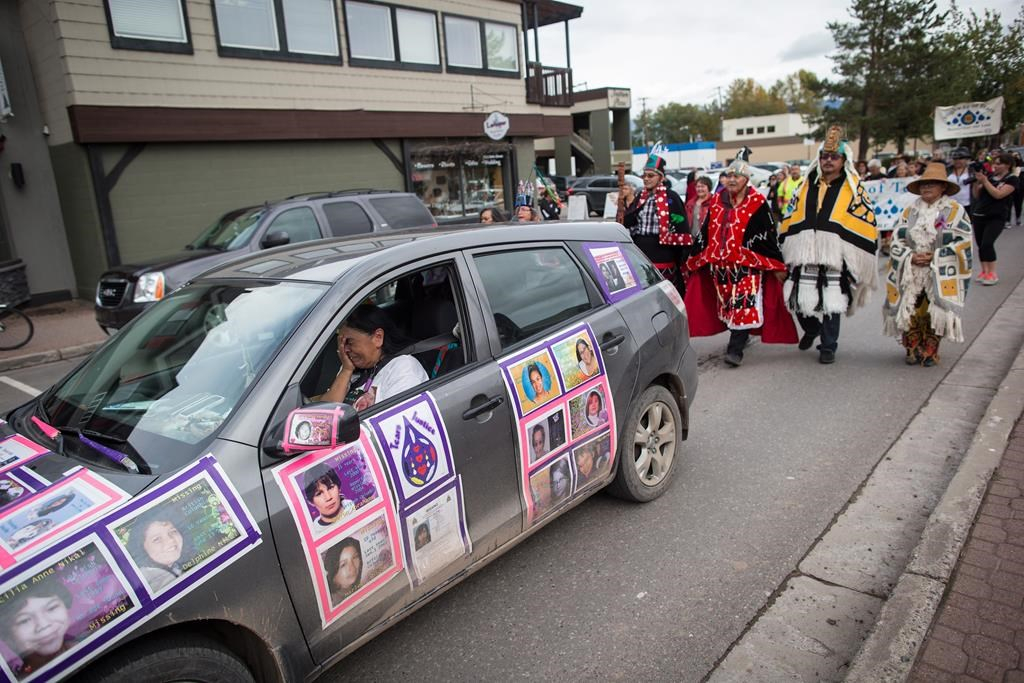 Driving a car covered with photos of missing women, Gladys Radek is overcome with emotion as she leads a group of family members and advocates of MMIWG upon arrival in Smithers, B.C., on Sept. 25, 2017. Photo by The Canadian Press/Darryl Dyck
Previous story
Next story

Gladys Radek raised a fist in the air and wept as she reached the end of her 350-kilometre journey along British Columbia's Highway of Tears.

The Indigenous grandmother finished her walk along the notorious stretch of Highway 16 for the seventh and final time on Monday. It is the same highway where her beloved niece Tamara Lynn Chipman disappeared.

Outside a community centre in Smithers, B.C., her voice shook as she spoke to those who had walked alongside her, including commissioners from the national inquiry into missing and murdered women.

"I want to thank you all for standing so proud and loud, to show our commissioners that we have love for our missing and murdered women," she said through tears.

Dozens of women have disappeared or been killed along the highway between Prince Rupert and Prince George in central B.C.

Radek and other family members and advocates left Prince Rupert on Thursday and arrived Monday in Smithers, where the National Inquiry into Missing and Murdered Indigenous Women and Girls will hold hearings starting Tuesday.

The walkers were accompanied by vehicles and have covered sections of the route in a relay fashion, allowing them to complete the walk of hundreds of kilometres over the span of a few days.

During the final stretch through the town of Smithers, Radek, who is missing a leg, drove a car covered in photographs of women who have disappeared or been killed. She wept behind the wheel as passersby waved and honked their horns.

Inquiry commissioner Michele Audette joined the group three days ago, while Chief Commissioner Marion Buller joined on Monday. Commissioner Qajaq Robinson was supposed to attend the hearings but had to bow out due to a family emergency.

Audette said she walked to honour the resilience and strength of the families who will be speaking for the first time to the inquiry. The hearings will be powerful, she said.

"I feel it since I arrived, there's a lot of emotion, lots of anxiety also or stress, because it's the first time for them," she said. "Just being there beside them and listening, maybe it's helped."

The inquiry has been plagued by controversy, including the resignation of commissioner Marilyn Poitras this summer and complaints from families about poor communications and delays.

Buller told a Senate committee last week that the inquiry's work has been hampered by federal bureaucracy.

Rhonda Lee McIsaac, who lives in Haida Gwaii and has Ojibway heritage, participated in the walk for the first time and said it was a moving experience.

"I'm walking for everybody who cannot walk," said McIsaac. "I have lost a loved one. I grew up in foster care and I was adopted out. This is part of my story."

More than 40 people have signed up to speak at the Smithers hearings, which run through Thursday. They are the second hearings held by the inquiry after it visited Whitehorse in May.

The inquiry is set to visit nine communities this fall, including Edmonton, Winnipeg and Thunder Bay, Ont.

Watchdog calls for changes to fund for parents of murdered, missing children