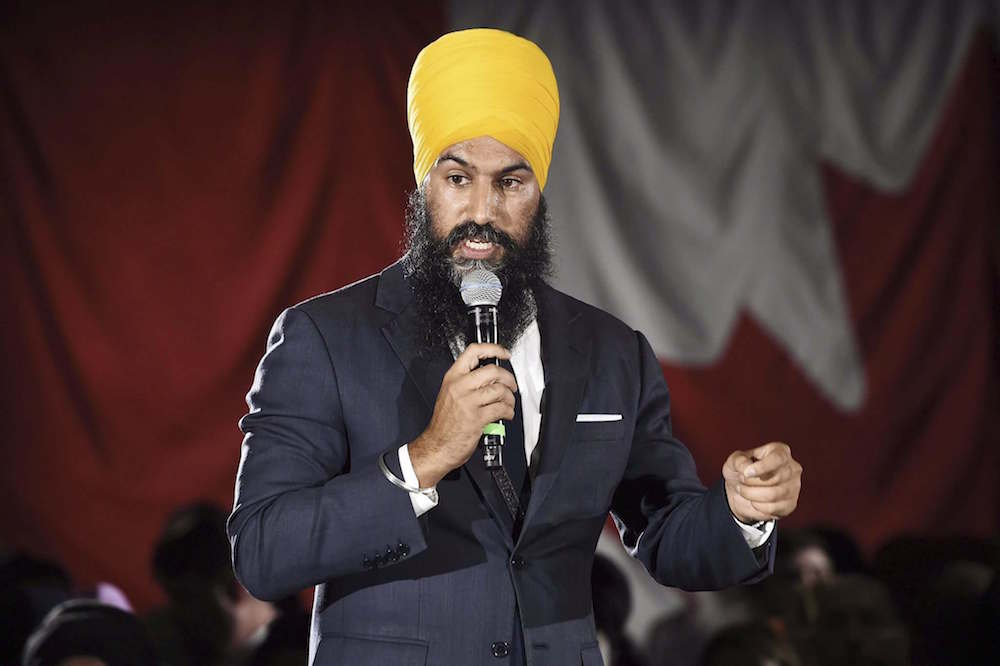 Jagmeet Singh captured the NDP leadership on Oct. 1, 2017 with a first ballot victory in Toronto. File photo by The Canadian Press
Previous story
Next story

Jagmeet Singh’s stunning first round ballot victory injected a jolt of volatility into Canada’s political landscape. Engineered with a dedicated strategy and ground-game, Singh’s campaign was marked from the outset by a disciplined and unwavering commitment to his key identity marker, “With Love and Courage.”

That framing went viral when Jagmeet Singh was captured on film calmly citing his mantra when confronted by a racist heckler during the campaign. To build a public identity that captured his essence, Singh reached far outside the world of seasoned political veterans. Instead, he approached the somewhat obscure Skyrocket, a boutique Vancouver branding agency co-founded by Mo Dhaliwal.

A novice to federal politics, Dhaliwal is better known as a nationally recognized and award-winning arts and diversity advocate, curator, and former chair of the B.C. government’s multicultural advisory council.

National Observer caught up with Mo Dhaliwal to talk about how a complete outsider constructed the public identity of Jagmeet Singh for Canadians. The following is an edited transcript of the interview:

Mo, you’re not known as a political operator. How did you connect with Jagmeet Singh’s campaign, and how did the process of creating his public identity work?

There is an amazing circle of people around Jagmeet, his brother Gurratan, and many others, and they’re quite familiar with my body of work.

So they looked at it and said, “Well, if he’s that guy, then he might be the right guy to do this with us.” And that’s why I was invited in.

What we did was to go through a really deep sort of interview of who Jagmeet is as a person. So it was a very long one-on-one conversation, observed by team members.

We had him for hours of me just peppering him with questions, trying to dig into the person and see who and what he’s about.

So often he’s got the critique that he’s all style and no substance. Then you start peeling back the layers of the onion and realize the type of life he’s lived and the compounding influences.

His spirituality and belief system led him to the positions that he takes. It’s very, very codified and densely articulated in him, right down even to his style of dress.

I was chiding him as we were going through discovery about why his appearance is so important. I asked “what do these vanities mean to you?” He unpacked that as a type of social armour.

He said a person of colour can’t just show up. You need to show up in a way that far exceeds anybody next to you, and only then are you able to move forward and project your voice.

Another theme that emerged was his notion of fighting for justice. This came from the towns he grew up in and getting attacked as a young boy and having to fend off people and really fight for himself, that created a sense of being able to fight for others.

Lastly, and he references this a lot in his speeches, he talked about his mother.

The theme that emerged here was the politics of love, and the teachings of Sikhi. His mom had brought to him that there is a profound force that connects all beings, and as a result of that force, all of our happiness, our sadness, all of our successes, our failures are shared experiences.

And through this oneness you need to enact policies that take care of all people.

So what rolls out of this was that we need to operate from a place of love, and only then can we really improve the Canadian experience.

But this is going to take bold decisions, and it’s going to take courage to be able to frankly, change things in a way that people aren’t comfortable with. That resulted in this tagline, “With Love And Courage.”

We almost do it a disservice by calling it a ‘tagline’ or a ‘slogan’ because it’s Jagmeet’s signature. It was so authentically him.

Where did “With Love And Courage” come from? Was that something that he used himself? Did you come up with it together?

We introduced it to him.

Once the discovery process was completed, we had tons and tons of transcripts to go through and audio recordings and everything else.

What came across time and time again was the theme of ‘love.”

When he spoke about empowering people or wanting young people, racialized people, people of colour, anybody that’s marginalized, wanting everybody to be able to live fearlessly and unapologetically.

From that, we saw that he was speaking about imbuing people with courage.

It’s our job to make it tight and punchy, so we brought it together. “With Love And Courage.”

Did you present a number of different options for him or the campaign to choose from? Or was this the one that you really focused on and said, “This is what we think. We’ve gone through this process and, we think this is a match.”

Yeah. When we go through our process, we come forward with one recommendation.

Jagmeet reacted quite favourably. It wasn’t a whiz-bang-wow, but more, “Okay, this, this makes a lot of sense for who I am.” But Jagmeet is also a very team-based sort of person, so we went through multiple rounds of consultation and brought everybody in the team back into the fold.

Jagmeet wanted to ensure that this wasn't just about him, that his whole team would be happy to be represented by this language and approach, to make it their own and to define how the team conducted themselves during the campaign.

It created the right type of intrigue and confusion, when an idea nestles in in such a way that you can’t quite get it out of your mind.

So there were good and bad sides to that. Not that everybody was resoundingly and unanimously for it.

We went through multiple consultations and the most vehement opposition we received was from the old-school NDP strategists. That opposition was visceral. It was like, “This is wrong. This is the worst thing you could possibly do to this guy.”

And where did that come from in particular?

Fear. There’s a fear that this wouldn’t serve to inoculate his weaknesses but would serve to accentuate them.

We were told that this wasn’t the right look for Jagmeet. Their position was really that, as the smart people in the room, (they) need to figure out what the right language is trigger votes. And then to put that language forward.

For a time I was even questioning myself. The opposition to this was so strong that I was questioning do I really even know what I’m doing here?

I’m a political outsider, should I really be making recommendations like this?

So when we look at what the objectives of the campaign were, they were to usher in a new era for the NDP and to show the vision for a new Canada, we realized that we were onto the right thing and the right people are resonating with the message.

Tell us about the moment that viral video just exploded. What was your involvement in the campaign at that point and what did you see?

So most of my involvement with this campaign was up front in setting the brand strategy for the communications that the rest of the team and many talented people followed through with.

That viral video of him being attacked by the heckler is not the sort of incident you ever hope for, but it also provides you the type of coverage you couldn’t ever pay for. I think a lot of the praise (he received) is definitely, well-deserved, but on the other hand, it’s also part and parcel of what comes with the territory when you’re somebody like Jagmeet. I’m quite sure that he’s dealt with this most of his life, and so the approach that he took to it was very signature Jagmeet.

That’s also why there was nothing really exceptional about it. What was exceptional was that we captured it on video, and others were able to see this person and what his approach is.

Canada is always presented internationally with having a certain brand promise. One of diversity and access and opportunity and all these sorts of things, whereas the reality is that there’s still a lot of structural racism in Canada that holds people back.

What do you mean by structural racism?

I think street-level diversity isn’t difficult for any major metropolis frankly. Canada has a real pedestrian diversity, but the air becomes increasingly rarified the further up the power structure you ascend.

Whether it’s the boards of governors at educational institutions or our largest corporations or government, the population that is in positions of true power is always localized around middle-aged white men.

This vision that we sell to the rest of the world, somebody like Jagmeet obtaining a position of political power like this reclaims that vision and living Canada’s brand promise for the first time.

How much of a threat is Singh to Justin Trudeau?

I’m going to say this a little facetiously – but if you’re one of these “woke millennials,” or if you’re a young person of colour, or frankly if you’re anybody that’s ever been in a position of being marginalized, there is massive appeal and attraction to Jagmeet, not just because of his identity, but also because of how he conducts himself.

When you’ve got a person that has faced incredible hardship and has persevered, somebody that’s been marginalized most of his life and has overcome that—I think people feel a lot of solidarity with him, and his cause and his rise.

And as a result they can see themselves, right? I think that’s one of the biggest things that politicians have. They try so hard to be relatable, and they have like, a million smart people telling them all sorts of different ways they can appear more relatable. It’s like Stephen Harper—don’t shake hands with your son, give him a hug.

And people struggle with being relatable. And then you have somebody like Jagmeet who’s relatability is profound because he’s one of us. And I’m not saying that as a Punjabi. I’m saying as anybody that’s been marginalized, any of the common people that haven’t been a part of the cool clubs or the power structures or been on the inside ever.

He’s one of us, and that makes him immediately relatable. You add that he brings a grace and a charm and approachability and the love that you don’t see in the political realm ever.

It’s not something you can fake, and anybody else in the federal realm is going to be really hard pressed to compete with that.

I hate to see the

I hate to see the unthoughtful toss of the term "brand" when it's applied to depict a fellow human. First of all, it's a metaphor for an inanimate mass-produced product that's for sale and cannot mean an individual person with a unique set of past and ongoing experiences, relationships, values and aspirations. A brand gains attention solely through advertising, our nearest counterpart to brainwashing with its repetitive exposure. A brand name item declares itself uniform, inalterable, ultimately commercial in its inception and purpose. Let's drop the "brand" metaphor at the same time as we end the mechanical metaphor "feedback", and simply use "response" whenever people are involved.