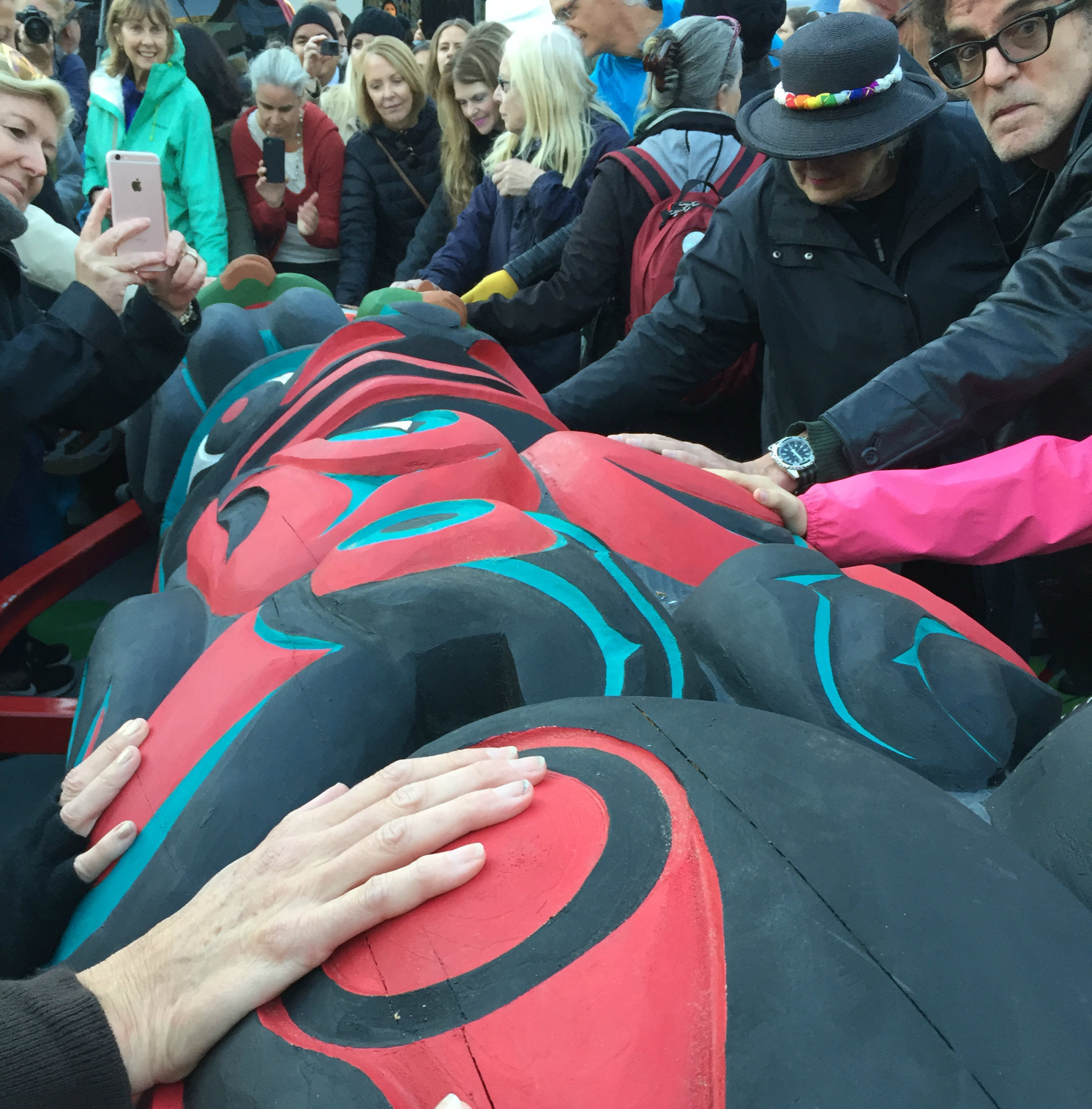 People carry a totem pole at a celebration in downtown Vancouver after hearings in court over the Kinder Morgan Trans Mountain pipeline expansion on Friday, October 13. Photo by Dylan Waisman.
Previous story
Next story

Environmental and Indigenous activists celebrated outside the Federal Court of Appeal in Vancouver on Friday, where applicants wrapped up their final arguments against a major oil pipeline project.

As the crowd gathered in the cold around a vividly painted totem pole, Tsleil-Waututh First Nation representative Rueben George gave a speech promising that the Kinder Morgan Trans Mountain expansion would never be built.

The Tsleil-Waututh are among the First Nations fighting the proposal, which would triple the capacity of an existing pipeline to carry 890,000 barrels of diluted bitumen to the Burrard Inlet and increase the amount of oil tankers to the coast. Known as "people of the inlet," the Tsleil-Waututh have been vocal critics of the project on grounds that it would threaten their culture and way of life, though some other B.C. First Nations have agreed to support the pipeline expansion.

George's daughter Kaiyah spoke at the protest, telling the story of the creation of the Tsleil-Waututh inlet, and how she felt it was her duty to protect her traditional territory.

"It's the story I've been told my entire life, by my grandmother and my parents," she said. "To me, [the oil infrastructure expansion] represents of a lot of disrespect to us. The Inlet is where we come from."

The Tsleil-Waututh disagreed with the NEB's statement. Last week, the Tsleil-Waututh argued in court that Ottawa consulted Indigenous peoples with a "mind that was already made up" to green-light the project.

Observing Friday's hearings, a legal advisor representing a company with interests in the pipeline said Ottawa's arguments were strong enough to potentially win the case. The advisor expressed surprise over the weakness of Trans Mountain's arguments on Tuesday, citing the lack of response to specific legal arguments presented by the nine plaintiffs. Trans Mountain's lawyer stated during the hearings that she would not be addressing legal arguments in her submissions, and instead walked the court through the NEB's decision-making process while highlighting sections of Trans Mountain’s original application to expand the pipeline.

The advisor believed that were it not for the NEB's arguments on Friday, the case would have been in favour of the First Nations, cities and environmental groups.

Thomas Berger, a lawyer specializing in Indigenous rights who represented the province of B.C., said First Nations' legal rights have been increasingly recognized in court in recent years.

"The legal developments have been remarkable," Berger said, noting the Constitutional protection of Aboriginal rights and treaty. He said there has been "development of the idea that Indigenous people have to be consulted when a project that is going to impact them or their land is being considered."

Berger added that the Prime Minister's speech to the United Nations in September about Canada's failures in Indigenous policy was a "landmark," but that there was much more work to be done.

At the end of the hearing, the judge stated the ruling will take place several months in the future. In the meantime, Trans Mountain can proceed with preparing for construction, though no new pipeline can be put in the ground at this time. If a ruling is decided in favour of the plaintiffs, it could send the pipeline back for re-assessment, which could cause major delays in the construction process, even derailing the project altogether, as seen earlier this week with the termination of the Energy East pipeline.

It's too bad that Trans

It's too bad that Trans Mountain is permitted to continue it's preparation work, even though it has not been given a green light! What use are "conditions" applied during assessments of projects if they are completely ignored?