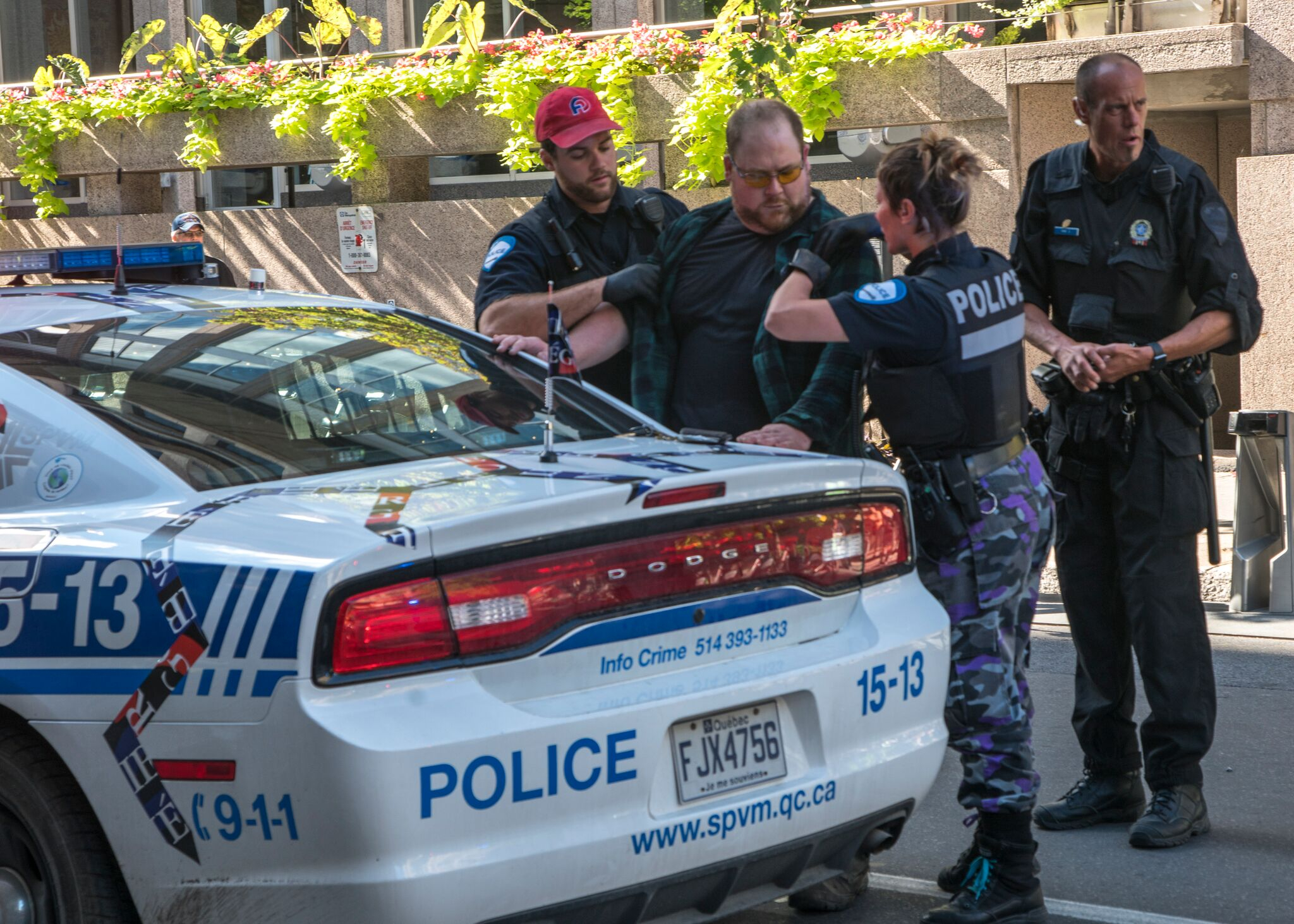 Update: The National Energy Board has postponed Tuesday's Energy East pipeline project hearings in light of the "violent disruption" that caused them to cancel Monday's hearing in Montreal. For more, read here.

The National Energy Board cancelled its scheduled panel session on the Energy East pipeline project after protesters criticizing the pipeline regulator’s integrity staged a sit-in at the Centre Mont-Royal Monday morning.

The #EnergyEast #Montreal Panel Session is suspended for today. We will be providing more information on our website during the day.

“In light of the events of this morning, we are obligated to cancel the hearing for today. We want to ensure that we can proceed in an efficient manner, but most importantly in a safe manner for everyone involved,” NEB Director Jean-Denis Charlebois said, as he announced the cancellation in Montreal Monday morning.

Among those slated to speak were Montreal Mayor Denis Coderre, Society to Overcome Pollution’s Daniel Green, the mayor of Laval, and representatives from the Union of Quebec Municipalities.

Protesters at the Centre Mont-Royal hammered on the NEB’s perceived conflict of interest in the hearings — with some calling for an end to the review process, saying the NEB can’t be trusted to give an objective recommendation on the pipeline. Others outside, including some union members, called on the pipeline process to proceed and commended its potential to create new jobs.

According to Ricochet Media's Ethan Cox, who was in the room when demonstrators stormed inside, the scene began when a single protester chanting anti-NEB slogans rushed the front of the room where NEB panelists were set to speak. Security intercepted him, put him in a chokehold, but soon released him when multiple other protesters joined him at the front of the room with a sign quoting Prime Minister Justin Trudeau that read "only communities can grant permission."

​Mayor Coderre reportedly left the hearings before their cancelation, calling them a "circus" before storming out of the room.

Coderre, along with a coalition of 81 other Montreal-area mayors, have long opposed TransCanada’s controversial 4,500 kilometre, $15.7-billion pipeline project — if built, it would be the third largest oil pipeline in the world.

He reiterated his concerns with the pipeline project at a scrum following his departure from the hearings, citing safety issues and the Husky pipeline spill that contaminated the water supply to Prince Albert, Saskatchewan earlier this summer.

“Frankly, one of the main issues is a contingency plan — everything regarding safety. Imagine what happened with the spill in St. Albert. There were 69,000 people [there]. There are 4-million people [in the greater Montreal area]. Can we afford to take a chance?” Coderre said.

Coderre said that there are “too many problems we are witnessing to accept this project” and that “the project they present is wrong.”

And his opposition was bolstered after a National Observer report revealed that the NEB board chairman and two review panelists met secretly with former Quebec premier and then-TransCanada consultant Jean Charest.

Charest, who had retired from politics, was under contract at that time for TransCanada, the Calgary-based multinational energy company in charge of the Energy East pipeline project. The NEB, which has the powers of a federal court, is not allowed to privately discuss matters that are under review before the Board.

But the watchdog later apologized for providing false and misleading information after records released through access to information legislation revealed that the pipeline project was in fact discussed with Charest.

Those records consist of emails and personal notes from meetings, and show that Gauthier — who had already been named to a three-member panel to review Energy East — invited Charest to discuss the pipeline project in December 2014 with himself and two other commissioners.

Coderre called for a suspension of the federal hearings on Energy East last week in light of the ‘Charest affair,’ questioning whether or not the NEB commissioners who met with Charest are “apt to be panelists.”

But the NEB decided to soldier on with the hearings, opting to ban panel speakers from talking about their meetings with Charest and the alleged conflict of interest that represents at the Montreal Energy East hearings. The federal energy watchdog instead asked to receive written complaints about the Charest meetings from stakeholders, saying that anyone who wanted to present arguments or comment on the request for the recusals would have to deliver them on-the-record and in writing before Sept. 7, 2016.

Green Party of Canada Deputy Leader Daniel Green was slated to speak at the hearing on Monday. He said he was held outside the room by police while protesters were arrested and dragged away. He said the level of frustration over the Montreal hearings is high, adding that “there hasn’t been a day in the last week where reports haven’t come out showing that the current NEB panel seems to be tainted beyond repair.”

The lawyers representing environmental groups in Quebec and Ontario said the off-the-record meetings violated NEB rules and tainted the review process since the regulator is supposed to hold open, transparent and fair hearings. The NEB has powers of a federal court and must avoid showing any appearance of a conflict of interest.

Environmental groups, politicians, and other stakeholders have called for the NEB commissioners who met with Charest to recuse themselves from the hearings, or for the NEB to step up and replace them.

Green, who was going to speak to the panel about TransCanada's urban spill preparedness, said that "social peace" was broken today with the outbreak of violence at the hearings. He said the evidence shows that NEB panelists have pro-pipeline leanings and that, to restore that social peace, they should recuse themselves from the hearings before Minister of Natural Resources Jim Carr is forced to step in.

“Clearly trust has disappeared. It has escalated to violence. This has to stop, and one way to make the conversation civil is to demonstrate that the hearing will be fair and impartial. This impression that the NEB has never met a pipeline it did not approve has to be quelled,” Green said, adding that the only way to accomplish that is to appoint independent commissioners “known to be beyond reproach.”

And Coderre has faced condemnation from political actors across the country for his stance on the pipeline project. Leader of Alberta’s Wildrose Party Brian Jean called for Coderre to stop “meddling” in the process and let the pipeline get built.

NEB hearing about to begin and protestor rushes forward. "Transcanada, we don't want it" pic.twitter.com/znDSy2Ofhu

But First Nations groups, environmentalists, and some mayors along the route have fiercely opposed the proposal, arguing that it would prevent Canada from meeting its climate change goals and lead to oil spills that could cripple local economies.

“Even though that I do believe that this authorization of this pipeline will exclude any possibility of Canada meeting its greenhouse gas targets, the whole narrative here is ‘can we build a safe pipeline?’" Green said.

"If at the end of the day we come to the conclusions that it cannot be done, that the risks outweigh the benefit, then the pipeline won’t be built. Even though the elephant in the room is the fundamental question: ‘will this pipeline enable tar-sands expansion, and by doing that nullify Canada’s attempt to meet our Paris targets.”

This article has been updated to reflect new information about the NEB's updated agenda for the Montreal hearings.

-With files from Mike De Souza