Using art to blur the line between 'us' and 'them' 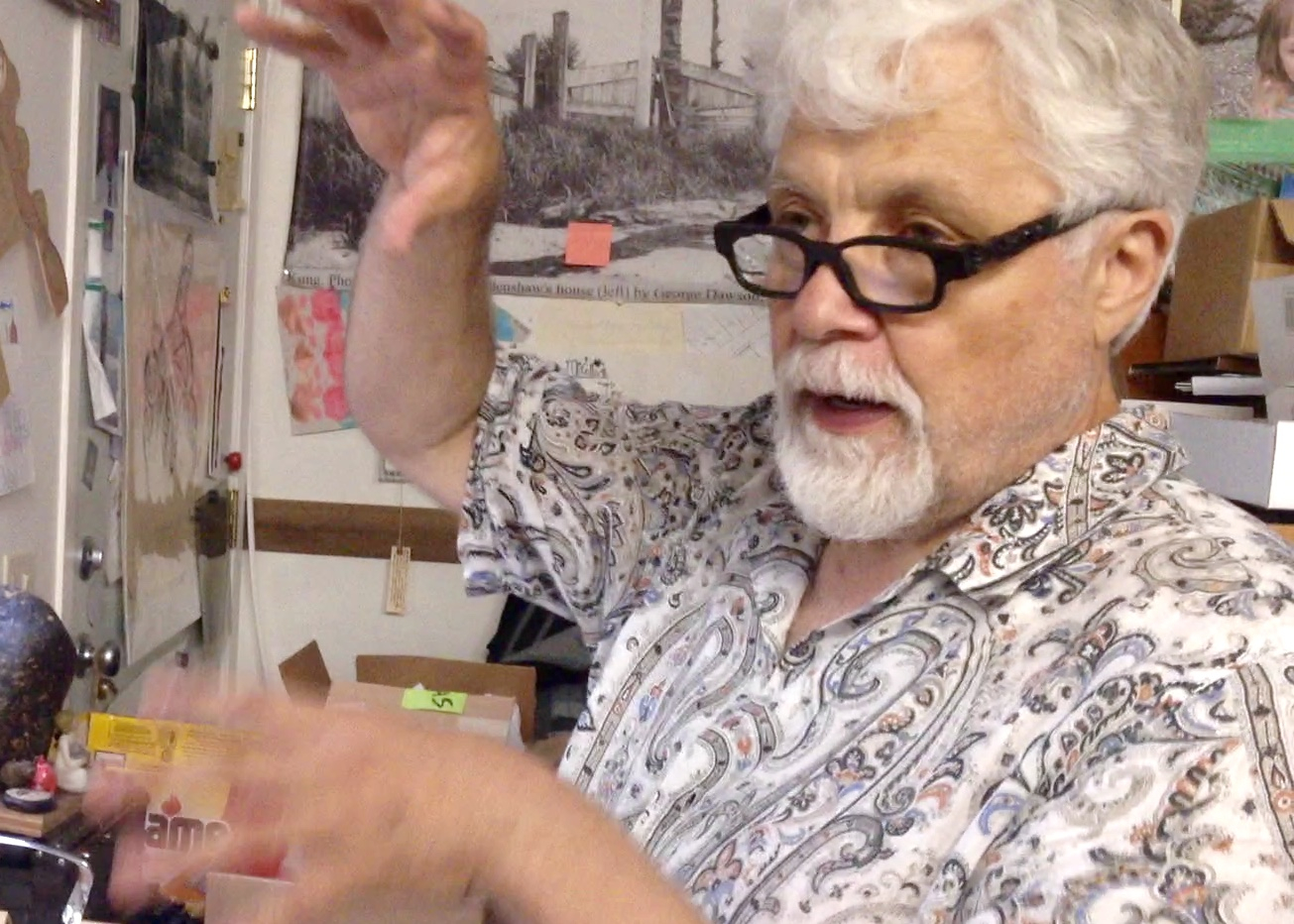 Michael Nicoll Yahgulanaas wants you to tear apart his books. Photo by Louise Loik
Next story

Michael Nicoll Yahgulanaas carefully sweeps falling leaves off the path to his Bowen Island home as, nearby, a string of colourful Buddhist prayer flags loft in the breeze.

The artist, born of Haida and European bloodlines, stands comfortably on both cultural shores, purposefully straddling the place in between.

His home, also an in-between kind of place, is close to Vancouver but a world away. He lives on an island with mountainous terrain surrounded by the sea; a place where whales and jet skis ply the waters once travelled by traditional longboats. Though laid-back, the island is also peppered with leading-edge thinkers. Yahgulanaas is just another member of this island of commuters, creatives, and work-from-home entrepreneurs.

He is also single-handedly staging an artistic and socio-political revolution. His artistic vision has caught the attention of international museums that now press for more of his work and his ideas.

“I’m not comfortable with the term, 'leading edge,'” he says. Instead, he prefers the idea that he is part of a continuum of change; part of a paradigm shift regarding the constraints imposed by one group on any other segment of society.

The artist from BC’s remote northern islands spent decades working within local government to protect cultural and ecological heritage in the Haida Gwaii. Now, instead of taking part in road blockades to protect ancient forests, Yahgulanaas uses art in his fight against prejudice and social divisiveness.

For the two decades that he lived among the Haida, he was absorbing the stories that were part of his own mixed heritage. He began infusing the stories into works of art, and then Yahgulanaas found seemingly incongruent inspiration in the far-away islands of Japan and their Manga style. Revolting against neatly packaged “authentic Indian” art, he took cultural expectations and tossed them aside by mixing art genres and mixing mediums from unexpected components of modern and ancient, Japanese Manga, Chinese brushstrokes, North American Indigenous, serious, and comical influences. 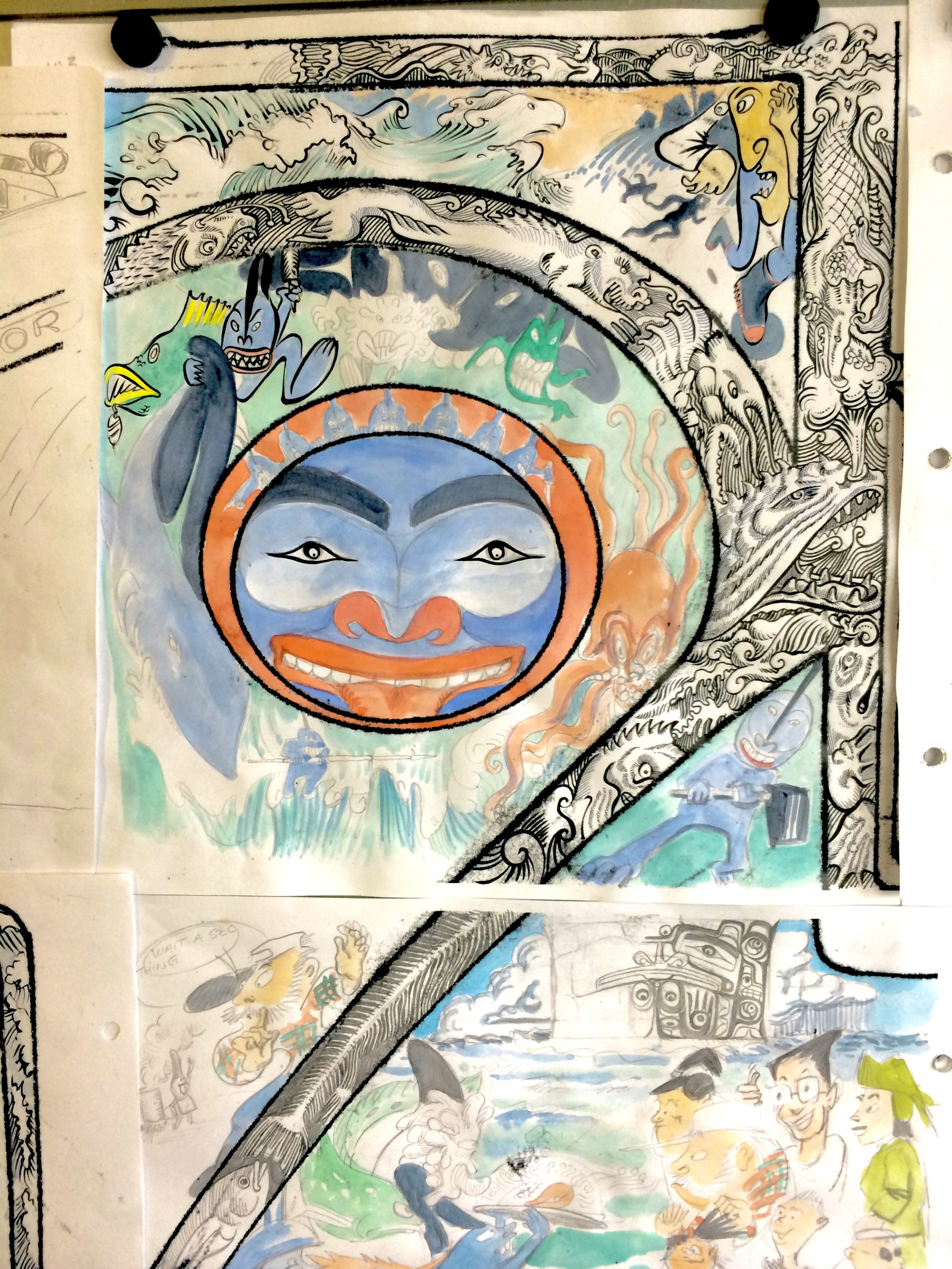 A work in progress, pages of Yahgulanaas' Haida Manga art are pinned in place against a custom-made magnetic studio table that allows the artist to add a series of individual pages of art to the Carpenter's Fin mural. Photo by Louise Loik

Yahgulanaas' art is not an evolution but more of a playful revolution and his unique style is holding the attention of some major players in the art world. The Metropolitan Museum of Art in New York and the British Museum both acquired culturally cross-pollinated pieces from his “Coppers from the Hood” series.

"The British Museum have called it the most important acquisition in modern times for the North American Gallery," says Yahgulanaas.

The series is an aesthetic breakthrough, using car hoods repurposed as art that evoke the sense of a traditional shield where motif and materials like copper plating, motifs and design all take on new ironic meaning.

Using characteristic humour, cultural convergence and unexpected juxtapositions, Yahgulanaas audaciously subverts the “happy Indian“ pathos. He plays with metaphors and message through every artistic choice of design, tools, and material; nothing is random. If anything, this artist is methodical and precise in his choices.

“Obsessive,” he says with a laugh. He should be. That the art world is looking to Yahgulanaas as a thought leader, and a representative of both a culture and a new genre, is no laughing matter. In New York, at the Metropolitan Museum of Art, the specific location of the installation of Yahgulanaas’ work makes a poignant statement.

Across from a modern black-and-white graphic by Sol LeWit in the Modern and Contemporary Art Gallery, and in a space leading from Indigenous artists of the Pacific Northwest, “Coppers from the Hood” is iconic. It expands on both sensibilities of modern and traditional and bridges the space in between.

"For the piece to be at the Met in that space, outside of ethnicity and outside of modernism, this is great. This is where I want the conversation to be heading," says Yahgulanaas.

He has also been invited to be part of a discussion of design at the American Museum of Natural History. "I have no design background," he says, but is happy to be involved in a cross-pollination of ideas.

In another instance where art is not only transformative, but also able to transform itself, Flight of the Hummingbird, Yahgulanaas' book about perseverance, is going through a metamorphosis that will re-emerge next year as an opera for teens.

Yahgulanaas says he was approached by a major institution in New York who want to stage the work. The book includes essays by Nobel Peace Prize winner Wangari Maathai, and by His Holiness the Dalai Lama. Remarkably, the Dalai Lama wrote the essay for Yahgulanaas without any previous introduction. For that matter, Yahgulanaas has no Buddhist affiliation, despite the Buddhist prayer flags strung from tree to tree outside his home. “I am not a man of ritual. Other people in my family put up the flags,” he says. Flight of the Hummingbird is philosophical and inspirational, but not dogmatic.

Training as an artist, refusing to be packaged

It may seem remarkable that with all this success and acclaim, the silver-haired man had very little formal art training. Though Yahgulanaas’ father was an editorial cartoonist, the two never met to explore their common interest in artistic story telling.

“It would be very easy to overstate my formal training,” he says.

A multi-media artist, he recalls his short period of formal training at an art institute in Vancouver. An instructor insisted, "You don’t use a chainsaw to carve a totem pole." Yahgulanaas shakes his head: "I thought, tell that to my cousins across the water, over in Haida Gwaii … I was offended and withdrew from the course."

His work, while not a contradiction in terms of “authentic” aboriginal art, is not an evolution either. Instead it is more of a personal revolt against the neatly packaged “authentic Indian” art; a way of colouring outside of the lines and creating something new. The thing is, Yahgulanaas has no interest in conforming to an "identifiable, marketable trope where 'Indians' are supposed to be artists with a specific, marketable style … I am mixed heritage."

The Japanese Manga influence comes from the fact that Yahgulanaas says his relatives went to Japan and weren’t subjected to the prejudices and discrimination they felt here in North America. On this continent, “every aspect of indigeneity has been assaulted; everything that defines community, in formal obvious governance, language, it’s bloody, violent and it’s persistent today.”

Identifying with the Manga graphic cartoon style was more of a political statement than stylistic.

Part of a larger movement

Yahgulanaas also creates space between society’s “us and them,” and claims the space in between in an attempt to soften, shift, or maybe erase the lines of separation that artificially exist between people and groups of people. It’s a daunting task for a work of art, for an artist, but Yahgulanaas may be part of a larger movement.

Lawrence Paul Yuxweluptun uses his Indigenous heritage to influence his bold surreal art. At a Vancouver roadside, Marcus Bowcott's Trans Am Totem is a sardonic commentary on the clash of ancient and modern, eternal and disposable, serious and comical.

The blend of influences, says Yahgulanaas, "is about breaking out of the ethnic filter."

He continues, "It’s about emotionally engaging ways to interact in this process. A way to witness 'the other.'"

Moving through his studio, he explains passionately that, "art can be mobilizing and inspiring if it is art that makes it accessible for all types of people to have a shared experience in their own way. To see 'the other' in a human way as opposed to fantastical ways that seem to be demonizing and assaultive." 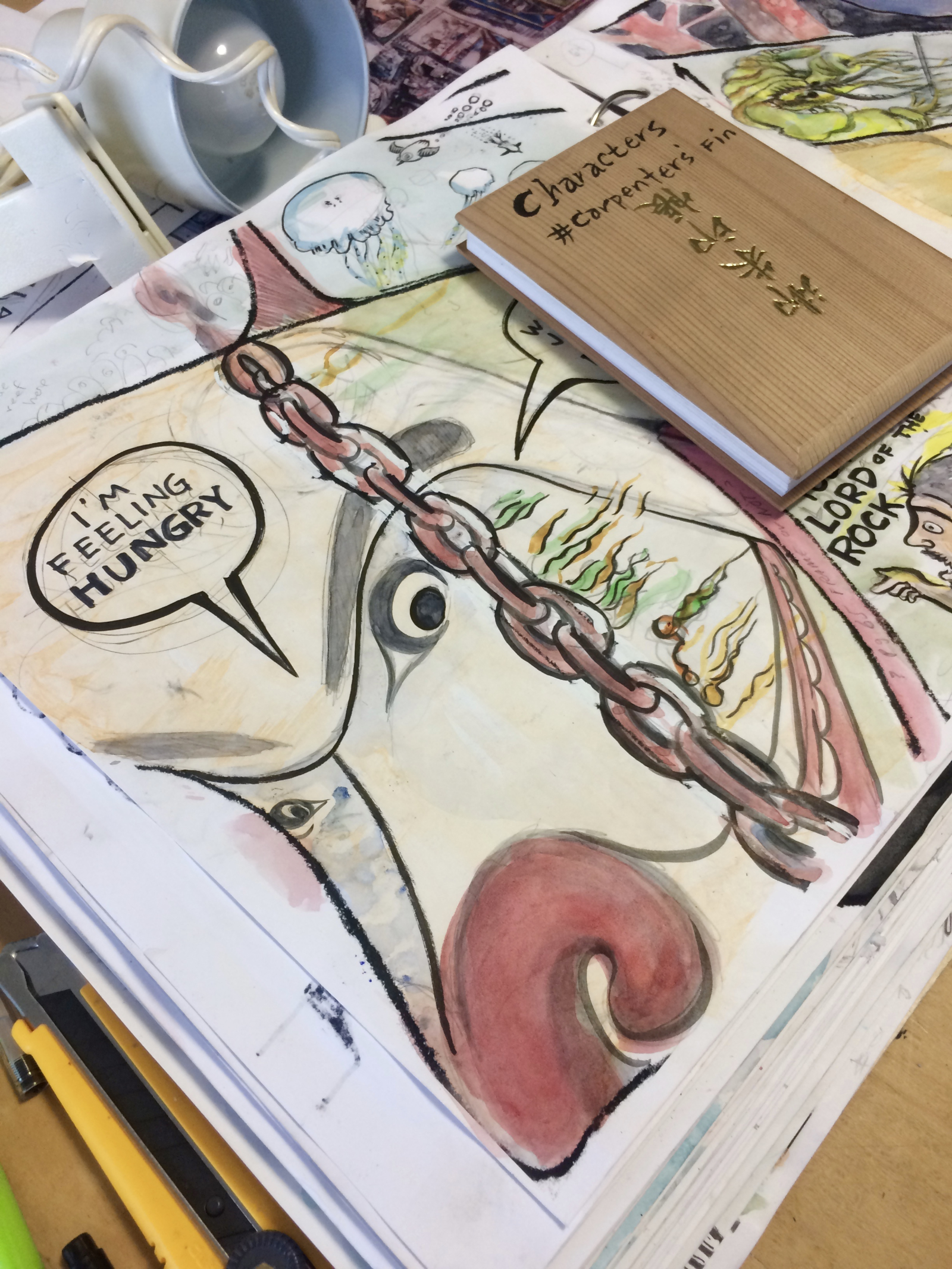 New work for an international audience

Yahgulanaas is working furiously to spread his message in a new work entitled called Carpenter's Fin.

Commissioned by a currently unannounced American museum, the work will be presented as both a mural in the museum and a book. Carpenter’s Fin invites a global conversation on the dynamics of our relationships with the ocean. The mural, six metres long and two metres high, is designed with individual sections, and each section is also a page of his book. Pieced together, 108 sheets of paper tell a story in the style of Haida Manga. Each element is tied together with the traditional First Nations style of flowing lines that lead the eye around the mural while also separating smaller images, and outlining figures. The dark lines hold the mural together, infusing direction and movement. It is a dichotomy, both modern and traditional. It draws the viewer in to look at the details of the cartoon-like story, while requiring the viewer to step back to take in the grand design.

Ancient iconography that represents Haida cosmology is only evident when you step back from the piece. Though it’s still under construction, this is a powerful, massive work.

“But,” reflects Yahgulanaas, “not everyone can get to the museum. Everyone can access the book.”

Two of his earlier works, Red and The War of the Blink, also took shape as murals and books.

Yahgulanaas has a way of inviting discussion with humour and a sense of fun. He encourages consumers to “tear out the pages and put them back together as your own mural.” 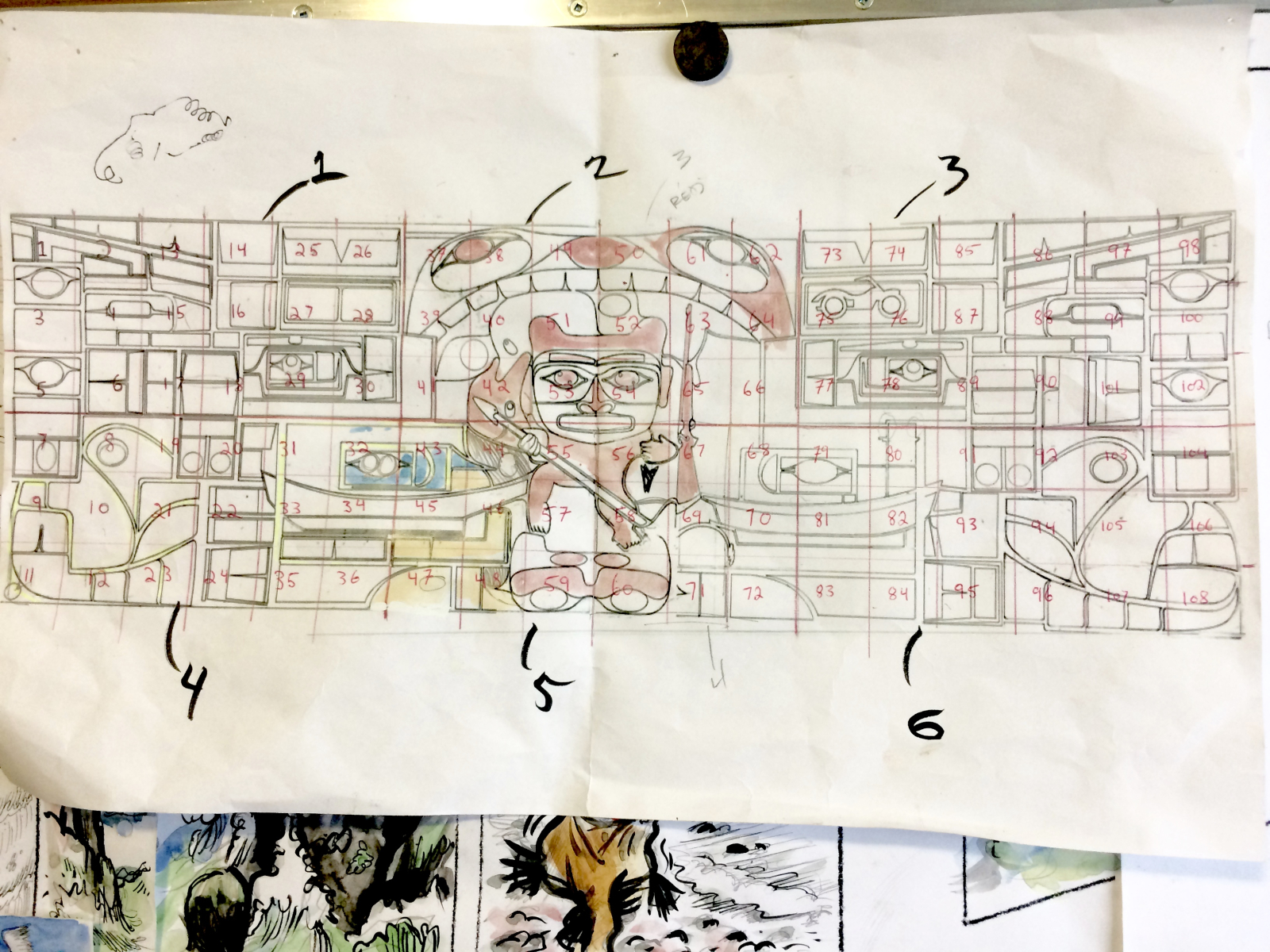 Diagram of Carpenter's Fin mural, showing the numbers that will correspond to pages in the accompanying book of the same name. Yahgulanaas wants readers to tear out the pages and make their own mural. Photo by Paula Hay

To increase accessibility, he also posts art daily from Carpenter's Fin on Instagram. He says he wants this engagement to, "change the way we look at one another."

"Demonizing 'the other' is so dangerous," he says. "What we see in conversations taking place south of the border and even in Ottawa and Vancouver, around ethnicity and 'the other' — if there ever was a time we needed to shift and substantially anchor a morally defensible definition of 'the other,' now is the time."

Continuing to reach out

For years, Yahgulanaas has been reaching out in his position as a trustee for the Christensen Fund, a private foundation that works for Indigenous communities around the world “that have been stable for thousands of years, to help them stay stable.”

Ranging from the Great Rift Valley of East Africa, to the montane landscapes of Tajikistan, and to Melanesia where there are some of the highest rates of linguistic and biological diversity in the world, Yahgulanaas says that these ancient societies have learned lessons that have helped them to thrive for a millennium. “Perhaps they have something to teach us.”

Learning from each other is important to Yahgulanaas. While he hopes his playful art can serve as a learning mechanism between cultures, he wonders about whether he managed to move the goal posts or change the game.

Or worse, has he played into an age-old sleight of hand?

"Oh, look, we have the Indian up here and that makes us look good?" he says. "That can be more wicked than promising."

In the world of art, he seems to represent a wind of change. Still, Yahgulanaas is not so certain that with a stroke of the brush he has made long-term changes to the cultural landscape.

"The question," he says thoughtfully, with a pause, "is what is coming next? … What’s happening is significant but … will it be something we can look back and say, 'That was a genre-shifting moment?'"