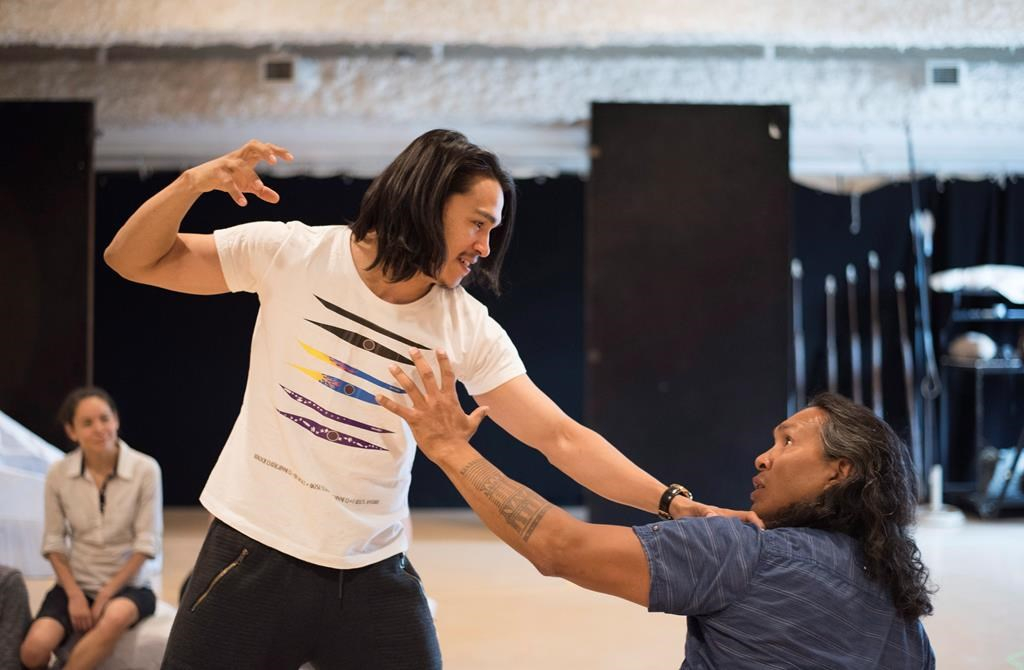 Actors Ujarneq Fleischer, left, and Johnny Issaluk rehearse a scene for the The Breathing Hole in Stratford, Ont. on Thursday, June 15, 2017. File photo by The Canadian Press/Hannah Yoon
Previous story
Next story

Reneltta Arluk wanted to acknowledge the origins of the story told in her Stratford Festival production "The Breathing Hole," so the director took the project to the North.

Consultations and workshops were held with Qaggiavuut, a Nunavut-based performing arts society, to ensure the play was inclusive and reflective of the Inuit community.

"It was tough, to be honest, because it was reconciliation," said Arluk. "(Colleen Murphy) has written this play with all of these Inuit people in it. And how do you navigate what is authenticity and what is not? And that's what we went up there to do. ... That land has to hear the stories that inspired it.

"The Breathing Hole" centres on the 500-year saga of a polar bear named Angu'juaq, which translates to "a big man" in Inuktitut. Audiences follow Angu'juaq from birth in an Inuit community in 1534 to an encounter in 1832 with English explorer Sir John Franklin and his crew.

The journey continues through to the 21st century, looking at the lives of a biologist and security guard working for an oil company, and a future devastated by global warming.

While Angu'juaq is a focal point, Arluk said both she and Murphy wanted to emphasize the toll drastic environmental change has on individuals.

"One of things that Colleen talks about is that people don't connect the Arctic to people," she said.

"It is Inuit that is feeling the impact of climate change because of the gases, chemicals that go up, because of how pollutants travel to the North. But people will get behind the endangered species of a polar bear rather than really look at how a whole society or a whole community are affected by climate change."

Inuk actor Johnny Issaluk valued the opportunity to give voice to his community in his theatrical debut.

"It's pretty much how we lived and where we came from; the storyline of my father, where he came from," said the Iqaluit-based Issaluk, originally from Chesterfield Inlet on the west coast of Hudson's Bay.

"Seeing it first-hand and then reading the story — it's so accurate. ... It's important to showcase where we come from. Not only that, but what's going on up there in any form or another."

Miali Buscemi said the opportunities for Indigenous artists to tell their own stories are improving.

"To play a character or to play a person that is Inuk, it is important to me," said Buscemi, who grew up in Kimmirut on the southernmost tip of Baffin Island.

"It's only now in recent years that Indigenous actors are playing their own roles because for many years they didn't, even in film and TV, which is largely what I've done from 2007," she added. "Even there, they always hired other people that looked Indigenous or could pass for Indigenous."

Arluk said she hopes "The Breathing Hole" will help pave the path for the Indigenous actors within the production to take on new projects.

"That's something I feel like we can do as part of this Canada 150 reconciliation," said Arluk. "On another level, I really think that it's important that our stories get told — and this is just a part of that process.

"Another thing is we have to actually acknowledge our engagement into the environment," she added. "When you're having these discussions about climate change, it's not going to go back — it's only going to go forward. ...

"The Breathing Hole" will be onstage at Stratford's Studio Theatre until Sept. 22.