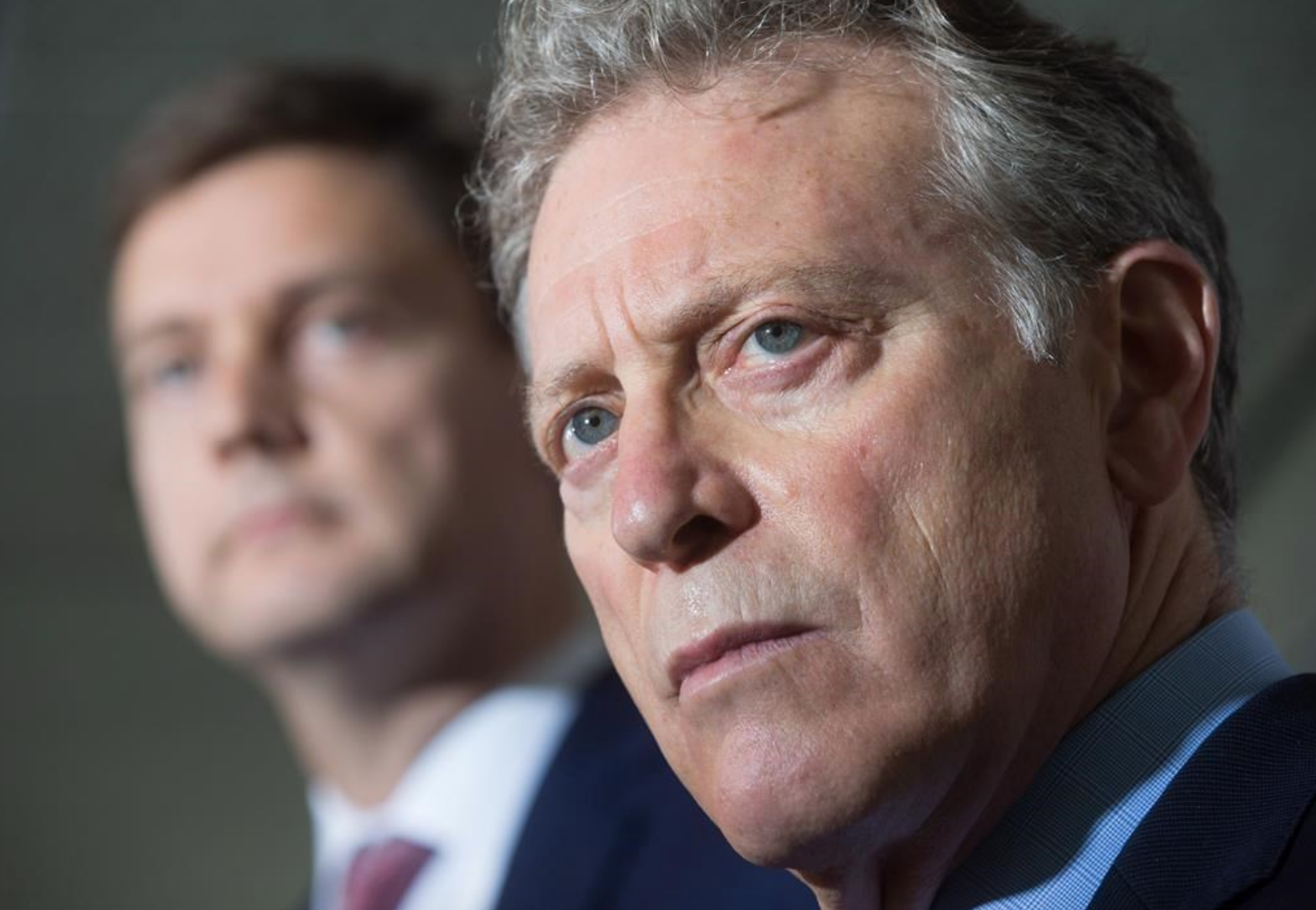 Due to an absurd legal twist, the new NDP government in B.C. has opposed the Trans Mountain Kinder Morgan pipeline expansion in one courtroom while preparing to defend the expansion in another.

Yes — the province has just finished fighting the pipeline in the Federal Court of Appeal at the same time as preparing to defend it in B.C. Supreme Court versus the Squamish First Nation.

How can that be?

Well, that’s the twist. Even if the NDP government opposes the pipeline, the Liberal government approved it. The government may have changed, but the approval remains in place and now must be defended in court.

Lawyers that spoke to National Observer all said the government has other options rather than to defend the pipeline, but Environment Minister George Heyman says the Attorney General has been told by both in-house and independent lawyers that he must defend the actions of the previous Liberal government in court, or risk losing the ability to regulate the pipeline in the future.

The Squamish Nation alleges that the B.C. government did not adequately consult with them when it granted the environmental assessment certificate for the pipeline expansion in January 2017. It has filed a case in B.C. Supreme Court to quash that certificate.

The proposed $7.4-billion pipeline expansion would triple the capacity of the existing pipeline, allowing it to transport up to 890,000 barrels of diluted bitumen a day from Alberta to Burnaby, B.C.

The Liberal government approved the pipeline in January, saying it would bring in $1 billion over 20 years. The NDP campaigned on a promise to fight the project.

After the NDP took power in July, it pledged to “immediately employ every tool available to the new government to stop the expansion of the Kinder Morgan pipeline, the seven-fold increase in tanker traffic on our coast, and the transportation of raw bitumen through our province.” That commitment is one of the keystones of the power-sharing agreement with the Green Party.

But despite that agreement, the NDP government still plans to defend the Liberals’ consultation process against the Squamish. Heyman said if the Attorney General doesn’t defend the government’s actions, the court could appoint someone else – a so-called “friend of the court” to do so.

“We don’t think that’s in British Columbian’s interest and we felt that there was a risk that we didn’t want to take, that we could lose, or the court could fetter our limited current ability to regulate the project,” Heyman said.

Meanwhile, over the past couple of weeks, the B.C. government has argued as an intervenor in a legal challenge against the pipeline expansion in the federal court of appeal as part of a case that includes several First Nations, the cities of Vancouver and Burnaby, and two environmental groups.

The B.C. government argued in the case, heard Oct. 2 to 13 in Vancouver, that the federal government did not give consideration to the risk to the B.C. coastline due to oil spills or risks to the B.C. economy when it approved the project.

“Therefore, the whole federal certificate should be set aside, which is the most effective legal outcome,” Heyman said.

So, the province wants the federal certificate to be set aside, but will fight in court to preserve the provincial environmental assessment certificate.

Attorney General David Eby’s ministry deferred all questions on this story to Heyman and the Ministry of Environment.

The "honour of the Crown"

Lawyers interviewed by National Observer say this decision to defend the pipeline expansion and the consultation with the Squamish Nation is unusual and comes down to “the honour of the Crown.”

Jocelyn Stacey, an assistant professor at the Peter A. Allard School of Law at UBC, said the Crown is always under an obligation to deal honorably with Indigenous people.

“The basis of that is the fact that the Crown has asserted sovereignty over land that was already occupied and the people here were never conquered,” Stacey said. “The Supreme Court of Canada has recognized this in countless judgments.”

The provincial government’s reasoning for continuing to defend the case against the Squamish Nation rests on the concept that the case calls into question the honour of the Crown and therefore the Crown must defend that honour. Stacey doesn’t buy that.

“To me it seems more dishonorable for the government to be taking two different public positions,” Stacey said. “I think it is based on questionable legal advice and that, to me at least, the honour of the Crown in this instance should not require the province to defend a decision that it publicly disagrees with. That’s a dishonorable thing for the Crown to do.”

Instead, Stacey said the government has a couple of options: It could ask the court to appoint an outsider, or “friend of the court” to answer for the consultation, or it could lay out the evidence in the case, but not take a position.

Strictly speaking, the two positions don’t contradict each other — the federal case is about the federal government’s consideration of risks to B.C.’s coastline, while the provincial case is about whether B.C. properly consulted with First Nations. But when considered simply as pro-pipeline or anti-pipeline, they do conflict.

“In that case, the province did the honorable thing and said we can no longer defend the position taken by the province and we’re not going to defend it,” Clogg said. “There is something profoundly broken if a newly elected government can’t admit the mistakes of its predecessor. If you look at the calls to action in Truth and Reconciliation, … that is going to require that the Crown admits its mistakes and tries to find a new pathway forward.”

When asked if the province could take a similar stance in the Squamish case, the Attorney General deferred questions to the Ministry of Environment, which said the two cases are not comparable, because the Delgamuukw case didn't impugn the honour of the Crown.

"The Crown’s duty is a positive legal and constitutional duty founded on the honour of the Crown, rather than simply a possible legal defence to a civil claim," the ministry said in an emailed statement.

Heyman said earlier in an interview that he understands why some people would think the two legal positions are contradictory and he has sympathy for people who are trying to make sense of it.

“We remain opposed to the project. We think it’s bad for British Columbians, bad for our economy, bad for our traditional marine harvest and other forms of marine activity,” Heyman said, but was unwavering in his assertion that the province must defend the actions of the Liberal government in court.

But Stacey said the government has another option: it could lay out the evidence in the case, but not take a position.

Clogg agrees the province has other options and said she would like to see a meaningful dialogue and process for consultation with First Nations and local governments.

“B.C. still has a myriad of other permits and approvals and unless they’re just going to rubber stamp them all and throw up their hands and say there’s nothing we can do, … it’s time for them to start collaborating with Indigenous peoples and with local governments,” she said. “I think that the province is really going to be under fire.”

Matthew Kirchner, a lawyer representing the Squamish First Nation in both the federal and provincial Kinder Morgan cases, says if the Attorney General reviewed the consultation process and decided it wasn’t up to standard, he should tell the court.

“My view of it is that it is not for the Attorney General to defend provincial conduct in all circumstances, simply because the Squamish are asserting it was not in keeping with the honour of the Crown,” Kirchner said. “If the Attorney General reaches a conclusion, based on his own analysis of the facts … that the provincial officials didn’t meet the standards, then he shouldn’t be defending them in court.”

The City of Vancouver has also filed a case in B.C. Supreme Court challenging the environmental certificate, charging inadequate notice and public consultation. The Ministry of Environment said that in that case, it will present the record and comment only on the standard of review. The reason it can do that in the case against the city, but not against the Squamish again comes down to the honour of the Crown, which doesn’t apply in the case brought by Vancouver.

Stacey said the case against the Squamish is also problematic because the government has promised to forge a new and better relationship with Indigenous people.

“This doesn’t seem to get this off to a very good start,” she said.

But Heyman said the government’s commitment to reconciliation and partnerships with First Nations is firm.

“Our commitment is not wavering,” Heyman said. “It is difficult and challenging but we are committed to doing everything we can and we’ve begun to demonstrate that in our appearance in the federal court when we said — set this decision aside, it’s wrong.”

Trans Mountain did not immediately respond to a request for comment on the issue.

Tracy Sherlock writes about the B.C. government for the National Observer each week. Contact her with news tips at [email protected].

B.C. "asleep at the wheel" on Kinder Morgan monitoring: economist

BC government position is

BC government position is incomprehensible. especially with the precedents in which provincial and federal governments have admitted the Crown has acted DIShonourably towards First Nations. !

From the article - " Environment Minister George Heyman says the Attorney General has been told by both in-house and independent lawyers that he must defend the actions of the previous Liberal government in court, or risk losing the ability to regulate the pipeline in the future."