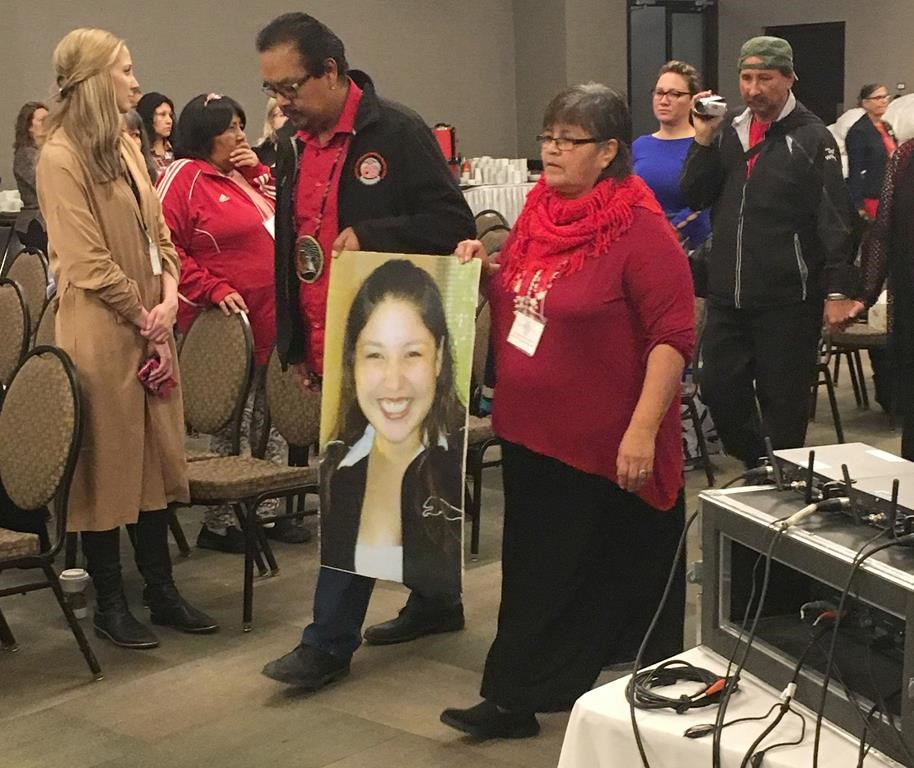 Bernice Catcheway, right, carries a picture of her daughter, Jennifer Catcheway, into a hearing of the national inquiry into missing and murdered women in Winnipeg on Friday Oct. 20, 2017. Photo by The Canadian Press/Steve Lambert
Previous story
Next story

Feeling abandoned by police, the family of a Manitoba Indigenous woman who disappeared in 2008, has been digging through fields, ditches and garbage dumps for any sign of her.

The effort has put Jennifer Catcheway's relatives on an emotional roller-coaster and taken a toll on their health, they told the national inquiry into missing and murdered Indigenous women on Friday.

"One time, we found kind of a piece of a pelvic bone ... and I took that hip bone and I put it on a dresser," Jennifer's mother, Bernice Catcheway, said at a hearing in Winnipeg.

The bone was later determined not to be from her daughter.

Another time, the family dug up what appeared to be a head covered in mud and dirt, Catcheway said. It turned out to be a helmet.

Jennifer Catcheway was last heard from on her 18th birthday. She called her mother from Grand Rapids and said she was on her way back to the family home in Portage la Prairie — a 400-kilometre trip.

A few days later, when friends and relatives were unable to find any trace of the teenager, her mother went to the RCMP to report her daughter missing.

She said she was brushed aside.

"I said, 'I want to report my daughter missing' to this constable," Catcheway recalled.

A similar message came, Catcheway said, when a woman called her and said she saw two men burning clothes in a field.

The RCMP did launch an investigation and later determined the case was a homicide. But nine years later, no one has been arrested and Jennifer's body has not been found.

Catcheway said the RCMP have not interviewed some potential witnesses and were slow to take statements from others. The family continues to act on rumours and tips and search areas between Portage la Prairie and Grand Rapids.

"I want the public and Canada and the world to know how we were failed, how Jennifer was failed."

Jennifer's brother, Willie Starr, told the inquiry the family observed a different response when a white woman — Amber McFarland — disappeared later in 2008. He pointed to media reports of an extensive search effort, including one day when hundreds of people came out to look for the woman.

Dozens of family members of missing and murdered Indigenous women told their stories during five days of hearings in Winnipeg, but a backlog remains. Inquiry officials announced this week there will be three days of hearings next month in the northern Manitoba community of Norway House.

The next round of hearings are scheduled to start Oct. 30 in Membertou, N.S.

Nahanni Fontaine, an NDP legislature member who has worked with families of the missing and murdered, said the federal government must extend the inquiry's two-year time frame. She said more time, more resources, such as travel funding, and more emotional supports are needed to ensure every family across the country that wants to be heard is heard fully.

"To imagine that we could do that in two years is so beyond unreasonable and so beyond disrespectful."

More shakeup at inquiry into murdered and missing indigenous women