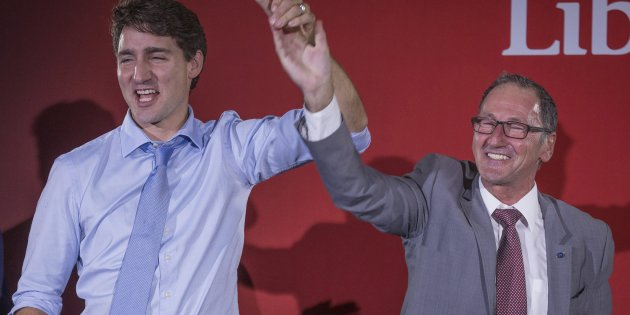 Liberal Richard Hébert cheers with Prime Minister Justin Trudeau during a rally on Oct. 19, 2017 in Dolbeau-Mistassini, Que. a few days before a by-election in the federal riding of Lac-Saint-Jean. Photo by The Canadian Press
Previous story
Next story

Justin Trudeau's Liberals have pulled off a stunning byelection upset, snatching the federal riding of Lac-Saint-Jean away from the Conservatives.

A Liberal victory in Quebec's nationalist heartland — where the party hasn't won since 1980 and where it posted its worst result in the province in 2015 — would have been remarkable at any time.

But it was particularly sweet for the prime minister on Monday, coming at time when his government has been mired for weeks in controversy over small business tax reform proposals, the personal finances and ethics of his finance minister and a new cultural policy that's been especially panned in Quebec.

Lac-Saint-Jean had been held since 2007 by former Conservative minister Denis Lebel until his retirement last spring. Prior to that, it was a Bloc Québécois stronghold, the home base of sovereigntist champion and Bloc founder Lucien Bouchard who went on to become premier of Quebec.

Richard Hébert, former mayor of Dolbeau-Mistassini, won the riding Monday for the Liberals, taking 38 per cent of the vote — more than double the party's vote share in 2015. He was some 14 percentage points ahead of the Conservative candidate, who was just slightly ahead of the Bloc contender.

The NDP's Gisèle Dallaire, who was a close second behind Lebel in 2015, finished a distant fourth Monday with just 12 per cent of the vote.

Voter turnout in the riding was 41 per cent — surprisingly high for a byelection and a sign of just how vigorously it was contested. The four main party leaders all campaigned in the riding.

The Conservatives held onto another long-time Tory riding, however. Dane Lloyd, a 26-year-old with a history of posting controversial views in social media, easily retained the Edmonton riding of Sturgeon River-Parkland with 77 per cent of the vote.

Among other things, Lloyd has referred to women's advocates as "Feminazis" and started a Facebook campaign to create a Canadian chapter of the National Rifle Association. He succeeds Rona Ambrose, the respected former cabinet minister and interim Conservative leader, who quit as the riding's MP last spring to join a Washington-based think-tank.

Turnout in Sturgeon River-Parkland was just 23.7 per cent, more typical for a byelection.

The Quebec win in Lac-Saint-Jean bodes well for the Liberals, who won a surprising 40 of the province's 78 seats in 2015. They are hoping to do even better in the province in the 2019 election to make up for potential losses in suburban Toronto and Vancouver ridings, where they fear newly minted NDP Leader Jagmeet Singh could make gains among new Canadian voters.

As much as Hébert's upset was a coup for Trudeau, it was a blow to Singh and new Conservative Leader Andrew Scheer, both of whom were facing their first electoral test.

Scheer lost a crucial seat in a province that is likely to determine the outcome of the next election. He can take some small consolation in hanging onto the Edmonton seat, where his party's share of the vote actually increased by seven points over 2015.

The results arguably bode even worse for Singh. He watched the NDP — which swept Quebec in 2011 and has been struggling to regain that momentum since Jack Layton's untimely death a few months later — sink into the role of bystander in Lac-Saint-Jean.

His party's share of the vote in Sturgeon River-Parkland, meanwhile, dropped about three points, as did the Liberals' share.

The fact that Singh is a practising Sikh has also been something of an issue in Quebec, with one poll suggesting one in two Quebecers wouldn't vote for a leader who wears a turban.

Dallaire said she doesn't know how much that factored into Monday's result. She suggested the Liberal victory had more to do with voters' choosing to side with the party in government.

"The belief is you get more when you're on the good side," she told The Canadian Press.

Dallaire conceded that Singh, who was elected leader just a month ago, isn't well known in Quebec.

"There's still a lot of work to do to make sure that people know him more than just for his physical aspect," she said.

For his part, Hébert said the result proves voters believe the government is going in the right direction, regardless of what all the critics may say.

Let me suggest that neither

Let me suggest that neither the Liberals nor Trudeau won in Lac-Saint-Jean. The winner was a very popular local mayor, Richard Hébert--a popular local mayor just like his predecessor. Had the Liberals run a political aide or their candidate in 2015, Sabin Simard, the outcome might have been very different. Congratulations to Mr. Hébert, the spoils of victory to him belong, not to the Liberals or Trudeau.