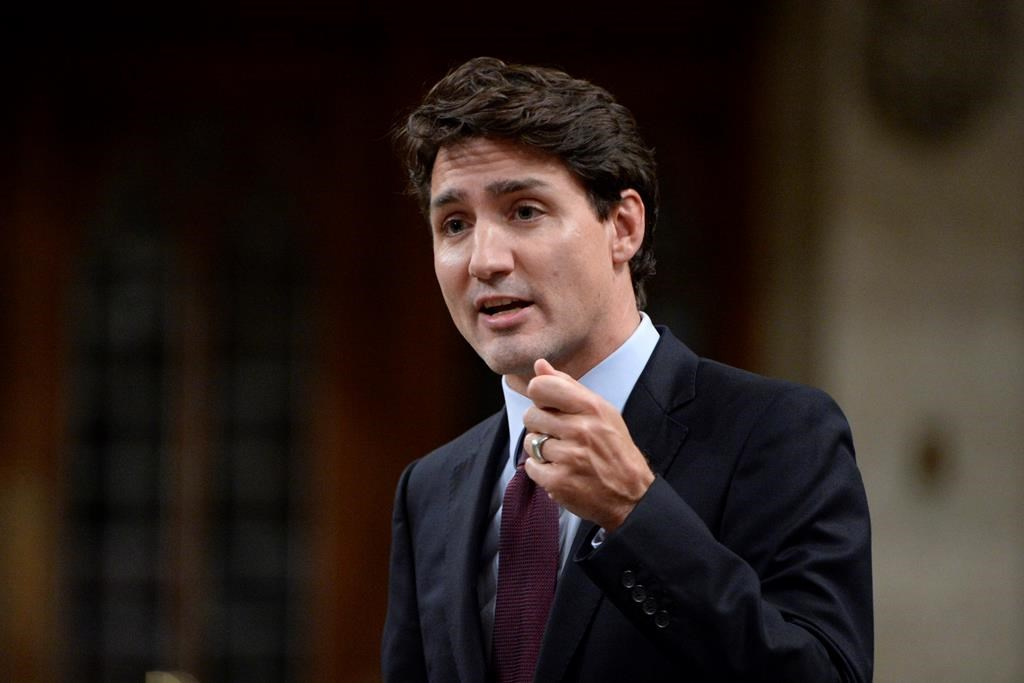 Prime Minister Justin Trudeau rises during question period in the House of Commons on Parliament Hill in Ottawa on Oct. 24, 2017. Photo by The Canadian Press/Adrian Wyld
Previous story
Next story

The Conservatives and the New Democratic Party also had a message for Trudeau when commenting Tuesday: the next federal election will see a much more competitive political battleground in Quebec.

“We have seen people voting for the member who will sit with the government,” said Gérard Deltell, the Tory critic for the Treasury Board. “They voted for power. They voted to be in power.”

Deltell spoke on Parliament Hill the morning after Liberal candidate Richard Hébert beat Tory, NDP, Bloc Québécois and Green rivals with 38.6 per cent of the vote.

The northeast Quebec riding of Lac-Saint-Jean hasn’t been controlled by a Liberal since the 1980s. For the last decade, it was home to former Conservative minister Denis Lebel, and before that to former premier Lucien Bouchard, founder of the Bloc Québécois party.

A triumphant Trudeau said Monday that the Liberals’ byelection win demonstrates that voters are satisfied with the Liberal recipe for economic growth: putting more money in the pockets of middle−class Canadians and making massive investments in infrastructure.

But Deltell said the voters of Lac-Saint-Jean went for Lebel during the Harper government because he was a “strong minister in cabinet” and they wanted another connection to government this time.

Hébert, the outgoing mayor of Dolbeau-Mistassini, beat Conservative candidate Rémy Leclerc by over 4,700 votes and Bloc candidate Marc Maltais by over 5,300 votes.

The newly-minted Liberal MP won more than double the Liberal vote share in the riding during the 2015 election.

He also effectively benefited from a split vote — Leclerc got 25 per cent and Maltais got 23.4 per cent.

"It’s a good day for the Liberal Party of Canada. Now we have to be very humble about it and keep working towards the next election," said Rodriguez.

The other candidates in the Lac-Saint-Jean byelection received less support. The NDP’s Gisèle Dallaire got 11.7 per cent, while the Green Party’s Yves Laporte got 1.3 per cent.

NDP finance critic Alexandre Boulerice, his party’s Quebec lieutenant, said it was clear the Liberals hoped to gain seats in Quebec in order to insulate themselves from potential losses in 2019.

“We will have to work harder in the next general election — even though it’s hard to draw any conclusions with only one byelection," he said.

Boulerice also said voters were enticed by Liberal attention heaped upon the riding. “I think the gift from the Liberal government had some influence on people when they had to put an ‘X’ on the ballot," he said.

However, he added that “two years from now, I’m sure all three major parties will be really competitive in Quebec.”

Byelection result may be a fluke, says analyst

The Lac−Saint−Jean contest and a second byelection Monday in traditional Tory turf in Alberta, where the Conservatives scored a predictably massive win, were the first electoral tests of leadership for a trio of new party leaders: Conservative Andrew Scheer, New Democrat Jagmeet Singh and Bloquiste Martine Ouellet.

In 2015, the Liberals had 18.4 per cent of the vote, equivalent to the Bloc results and behind both the Conservatives and the NDP.

Since the 1990s, Lyle said, areas outside Montreal have been difficult ground for the Liberals, with the exception of the 2015 federal election. Through the 1990s, much of the province was won by the Bloc, then in 2011 by the NDP, with just a handful of wins for the Conservatives. On Monday night, the Liberal candidate moved to the front of the pack, which Lyle called “very unusual” for a candidate for the governing party.

“Byelections are like a penalty shot, they’re like a free shot on the government, you can take out your frustrations, you can vent your anger,” Lyle said.

“So it may be a fluke. This may be a completely unique set of circumstances, but it’s very unusual. It’s strikingly unusual and what it suggests is that Justin Trudeau is rebuilding the coalition that Pierre Trudeau had...it’s a coalition of English Canadians in Ontario and Atlantic Canada, and Francophone Quebec.”

The byelection results also raise questions for the rookie leaders of the NDP and Conservative parties, said Lyle.