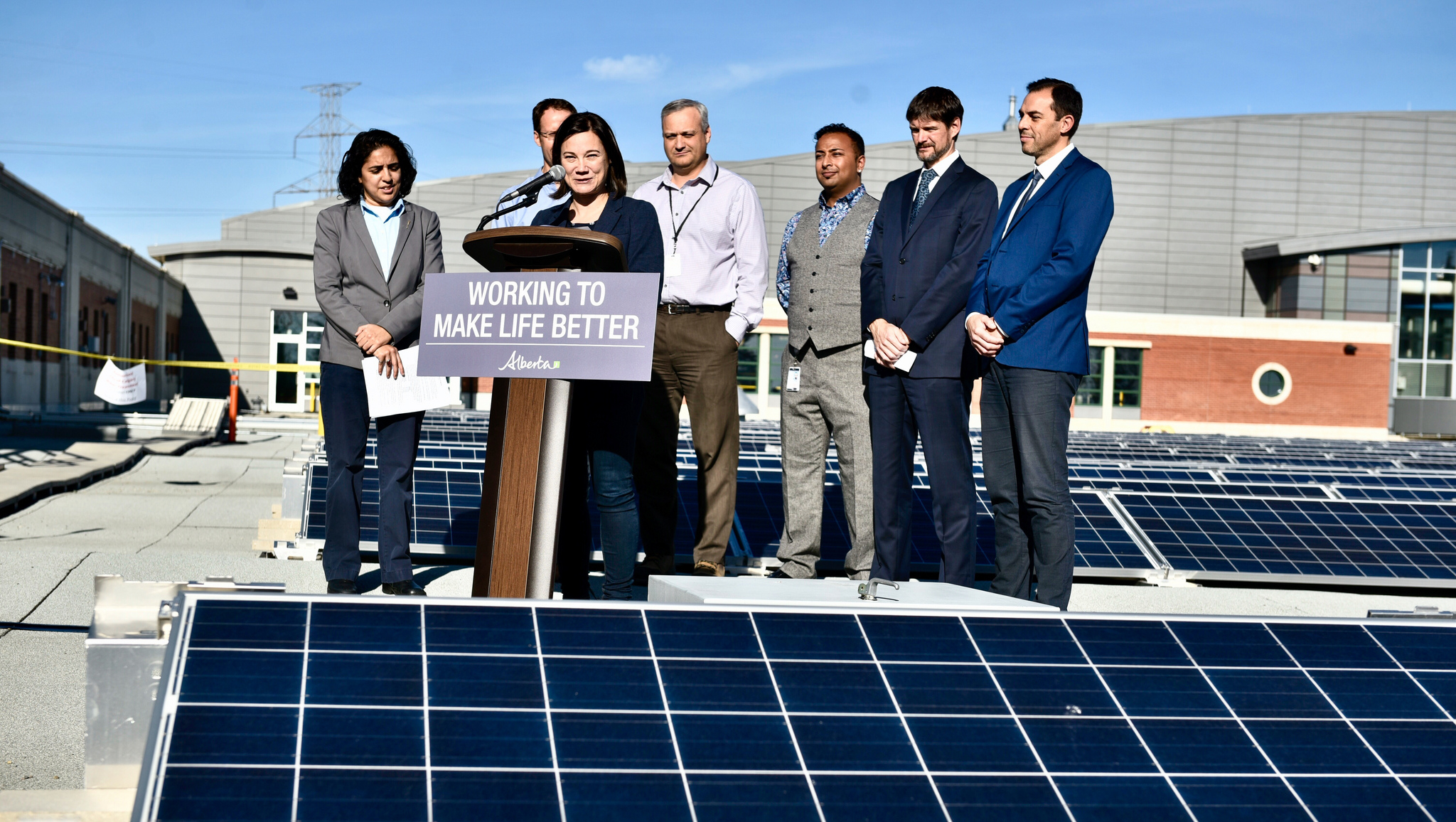 Alberta's environment minister says the province — known for its oil and oilsands production — will have a big stake in an energy future that shifts to renewables.

"We are an energy province that produces a number of different types of energy, from conventional oil and gas to unconventional sources. The world will need energy for generations to come and Alberta is the producer of that energy..." Shannon Phillips said Friday.

Her comments come in the wake of a National Energy Board analysis that concluded Canadians' fossil fuel consumption will peak in 2019 and then decline.

"This is a province that is up to the challenge, I can't think of any province that is more up to the challenge ... as long as there are policies in place that ensure that we understand climate change is real, action on climate change is real in the rest of the world, and it is our job to work together with our partners in industry and in civil society and in Indigenous communities and elsewhere to ensure we are resilient to the changes that are to come."

Alberta's oilsands region in the northern part of the province are considered to be part of the world's third largest reserves of crude oil after Saudi Arabia and Venezuela. But the region's tar-like heavy oil, found beneath the boreal forest in the northern part of the province, requires huge amounts of energy and water to produce. This makes production more costly than more conventional forms of oil and also means that extraction leaves a larger environmental footprint.

Phillips was in Calgary, providing an update on Alberta's municipal solar panel program, an incentive program designed around giving communities rebates to build solar energy into their electricity grids. Since its launch last year, 22 communities across Alberta have signed on. There are six solar projects funded through the program in Calgary, including the Bearspaw and Glenmore water treatment plants and the city's organic composting facility, and six in Edmonton.

"We can really see that solar power is on an upswing both locally and globally, and it's been incredible to see the uptake since 2015 here in Alberta. In fact, operating solar capacity has more than tripled since our government took office two and a half years ago," Phillips said.

This week, the National Energy Board said Canadians are currently on track to reduce their reliance on fossil fuels, such as oil, gas and coal. The energy regulator attributed that shift to carbon pricing policies and innovations in green technologies. How fast Canadians move away from fossil fuels will depend on whether the price of carbon emissions increases, and the accessibility of emerging technologies such as solar panels or electric vehicles.

At the same time, the board anticipated oil production, particularly in-situ bitumen production, will continue to expand through 2040.

"We know that for generations to come, fossil fuels will form part of the energy mix, whether it's in durables or in combustion. And of course the world changes in response to a number of market conditions," Phillips said Friday. "The goal for Alberta is to remain a place where energy producers can ensure good rates of return, remain competitive, and where Albertans can find good mortgage-paying jobs, either in conventional oil and gas, or in many of the renewable technologies that we're seeing."

"I'm sure I'll tune in at some point," Phillips said of the weekend vote, though she declined to offer advice to the incoming leader. "I don't have any recommendations for anyone who is on a political party that's not mine. So I will leave them to it."

But, she warned, the Green line is expected to generate jobs in Calgary, and it's "a project that would be cancelled if the price on carbon is cancelled."

“In 2017, I didn’t think that I would have to say this, but as the premier of the province, it is my obligation to say this: Being gay is not wrong. Engaging in safe sex is not wrong. And under no circumstances is sex without consent ever right. And that is what will be taught in our schools,” Notley said on Wednesday.

Editor's note: The headline on this article was corrected at 6:32 p.m.