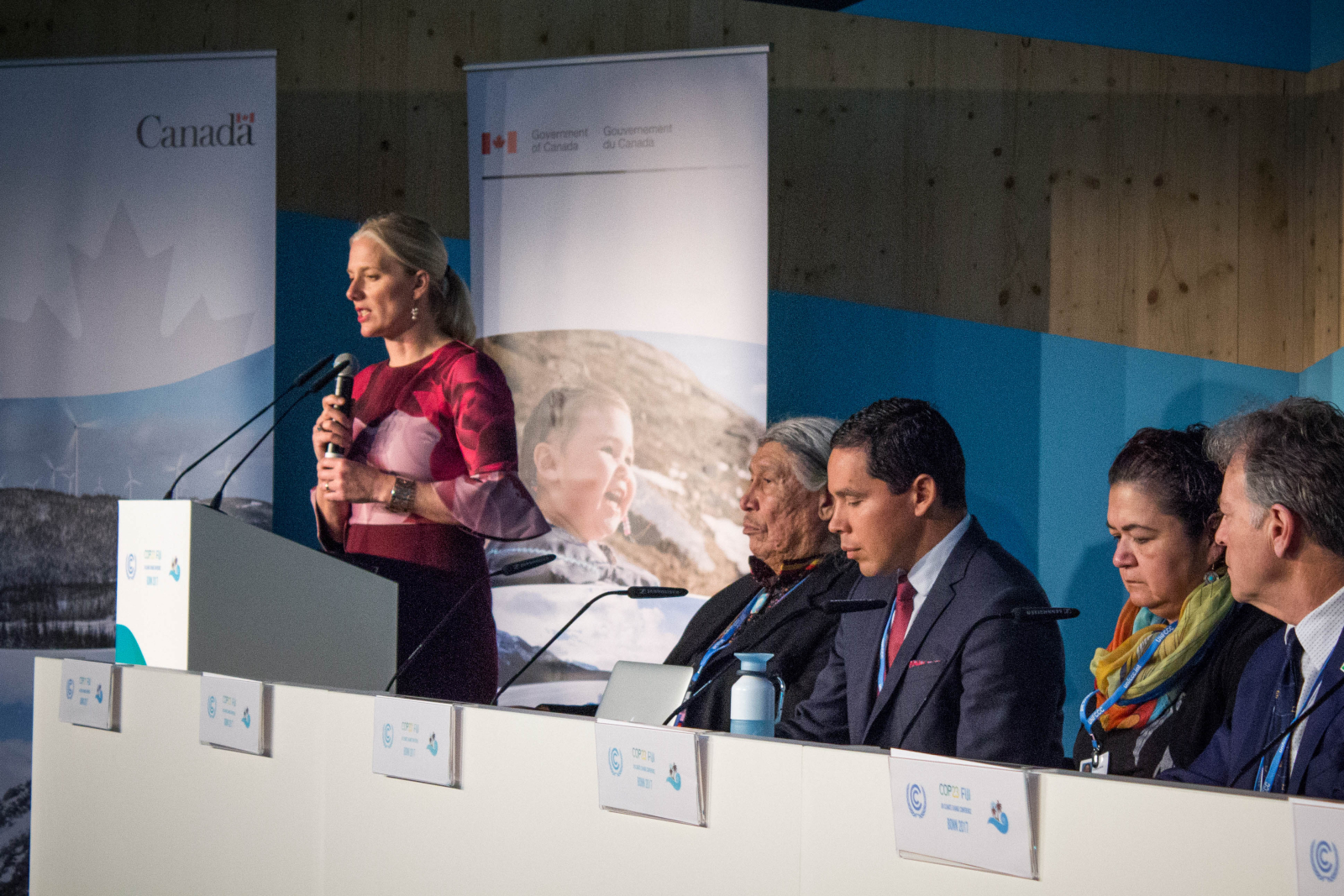 The Canadian government touted its leadership on gender parity at COP 23, the latest United Nations climate change negotiations in Germany.

In her first few days in Bonn, Catherine McKenna, minister of environment and climate change, repeatedly praised Canada for leading efforts to address the impacts of climate change on women under the Paris Agreement.

She told National Observer the Paris Agreement should include more women at the negotiating table so that policies would be reviewed “through a gendered lens.” On social media, McKenna demonstrated her commitment by sharing photos of her almost all-female negotiating team and tweeting the hashtag #GenderDay earlier this week.

McKenna gave an example of a disproportionate impact of climate change on women and girls by noting they “having to go further to get water when there are droughts.”

On the surface, McKenna’s commitment to women’s empowerment is inspiring.

Yet sitting in closed-door negotiations at COP 23, we as youth delegates think the government must do better.

Builds on years of work

The ‘Gender Action Plan’ developed for adoption at the Bonn conference builds on more than a decade of work that started in Marrakesh in 2001, where the representation and participation of women was mandated as a stand-alone issue in international climate change negotiations.

In 2014, world delegates met again in Lima where a work program on gender was established, putting a focus on implementing gender-responsive climate policies.

Parties were given three years under this mandate to develop a plan. Over the past year, Canada has taken a leadership position in support of a gender plan for COP 23. In September, Canada hosted a workshop that convened countries around finishing the work needed before the current climate negotiations.

Their submission to the UN was necessary.

They emphasized the importance of considering the inclusion of Indigenous and grassroots women within party delegations. They were supportive of initiatives and activities which look at the intersection of gender and climate with such other issues as food, health, security, just transition, decent work, and human rights.

We were happy a gender action plan moved forward. This plan is a huge milestone for implementing gender balance and equality for women. Women have knowledge in so many areas. They are also caretakers.

And when properly supported, they can lead their communities to be more resilient against the consequences of climate change and biodiversity loss.

But once negotiations were underway, Canada’s strong resolve to take leadership was not as apparent. During the first week of negotiations, Canada did not stand in solidarity with developing nations who wanted the inclusion of stronger language — specifically binding language on a just transition — in the Plan.

Just transition is the expression we use to promote a fair transition away from fossil fuels.

We believe that this should mean that impacted workers would be supported through skills training, employment insurance, job opportunities among other elements. Further, we support the sovereignty and rights to self-determination of Indigenous peoples in deciding what just transition means in their own communities.

In this just transition, we hope that new renewable energy solutions do not replicate the same injustices as the fossil fuel industry.

Some Canadian jobs are unsustainable

We understand that there are many Canadians whose livelihoods are currently supported by a carbon-based industry. However, these industries are unsustainable and must be transitioned. In this transition, we believe that threatened workers – especially marginalized and low-income people – should be supported justly through skills training, employment insurance and other programs.

From inside the negotiations we observed that the countries that were unwilling to support the inclusion of robust language on just transition in the Plan included the United States, Canada, New Zealand and Australia, which all have deep ties to the fossil fuel industry. They appear determined to avoid jeopardizing their ties with the fossil fuel industry that profits from precarious jobs and vulnerable communities.

We observed Canada remaining silent and complicit as other developed nations — like the United States and Australia — proposed to water down these statements. Through a twisted way of typical ‘Canadian-ness’ and hypocrisy, the negotiators took the middle ground instead of using the opportunity to demonstrate leadership and support the inclusion of justice for workers.

The Plan commits countries to take just transition into consideration but there are no binding actions.

Is this real change and real leadership? Or is it symbolic and empty rhetoric?

Conversations on gender equity and climate change must include peoples’ abilities to respond, engage and develop their own solutions to their unique lived experiences of climate change. It’s 2017. You can't promote gender equality without considering how race, class, age, religion, sexuality and disabilities intersect.

Where is the language and representation of people who do not fall into the Liberal’s narrow idea of (white) women’s empowerment? Championing gender balance means transcending the two-gender binary.

As soon as the negotiators are safe behind closed doors, we’re seeing a lack of leadership from the Liberal government. It seems as though they are content in the middle and in the shadow of the United States. Ultimately, it seems that Canada’s feminist leadership is only available when the spotlight is public and trending.

Tina Yeonju Oh is a Canadian youth delegate to COP 23 and previously to COP 22. She is a divestment organizer on unceded and unsurrendered Mi’kmaq territory in Sackville, New Brunswick. She was named among Canada’s Top 25 Environmentalists Under 25 and writes a feminist column on race and justice at The Argosy.

Jennifer Deol is a Canadian youth delegate to COP 23 and previously to COP 22 from the unceded Coast Salish territories of the Musqueam, Squamish and Tsleil-Waututh Nations. She is a founding member of the David Suzuki Foundation's Sustainable Diversity Network and Board Director of The Starfish Canada.

Providing leadership does not

Providing leadership does not mean passing proclamations at international conferences and meetings. Leading by example in our own country to transition workers is a better way, which I am glad the Trudeau government is doing.