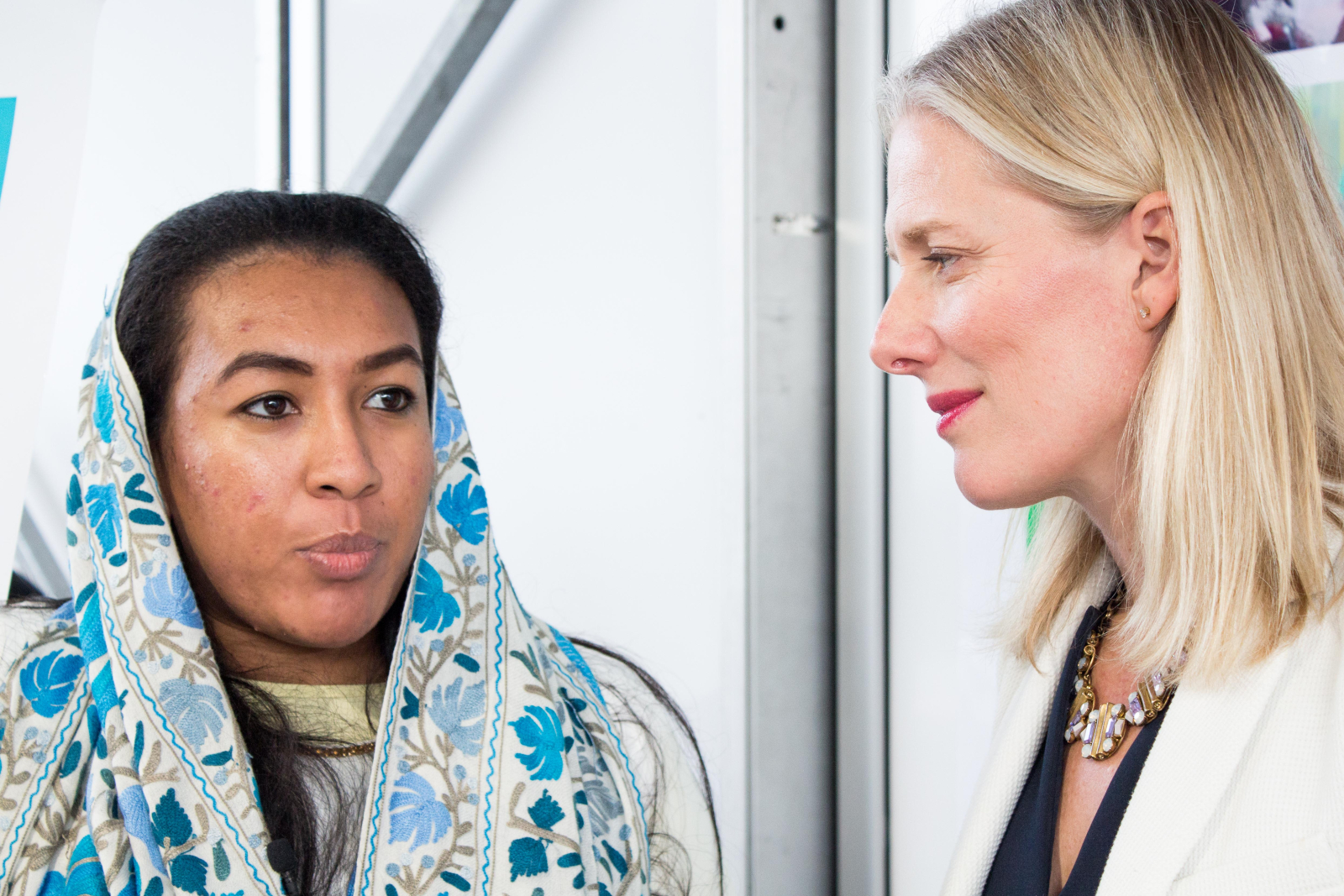 Hasna Hassan was thrilled to see Canada’s environment minister mingling with activists and others from civil society gathered near the international climate change negotiations.

Hassan is from the war-torn country of Sudan and she works for a telecom company. She was volunteering her time at a booth at the annual United Nations climate change summit in Bonn, Germany to promote awareness about the impacts of climate change on women.

Catherine McKenna stopped to chat with Hassan, who asked for a selfie.

A moment later, Hassan was grinning about the experience.

"It’s the first time I met her,” Hassan said on the margins of the Bonn conference.

Delegates, participants and observers at the summit are separated between two different campuses, a few blocks apart. At times, it keeps the negotiating sessions of politicians and diplomats away from the stakeholders who are telling their stories about climate change impacts and showcasing innovative solutions.

“I just saw a picture when Mr. Justin Trudeau — because I’m a big fan of your prime minister — when he was elected,” Hassan continued. "It’s really good, having your minister on the ground here, seeing what’s happening, not just in the (meeting rooms and negotiations) zone with talks and everything. They’re seeing what other people (are saying) and I loved that about her.”

Negotiators from nearly 200 countries are gathered in Bonn to devise ways to deliver on the goals of the climate change agreement signed in 2015 in Paris. McKenna said that Canada is also leading efforts to introduce new provisions in the Paris Agreement that force countries to address the impacts that climate change has on women.

In an interview a few moments earlier, McKenna said that this is something that’s missing from the Paris Agreement — ensuring that governments recruit more women as participants at the negotiating table and reviewing policies through a gender lens to see how these policies affect women.

“So we’ve been working hard to push this, to promote it, to work with like-minded nations and I think we’re feeling quite optimistic,” McKenna explained. “I think Canada has been great. We’ve trained female negotiators from the Caribbean countries… .We have almost all female negotiators for our (own delegation).”

The minister says she gets pushback whenever she speaks about the disproportionate impact of climate change on women and girls, though it is a real phenomenon.

“These are impacts ranging from women and girls having to go further to get water when there are droughts, to even more extreme things,” McKenna said. “So I was hearing about the impacts of hurricanes. As a result, men are losing jobs. Often they are the ones responsible, (for bringing) in revenues for their families, and you’re seeing an increase in violence — gender violence or violence against their spouses. There are real consequences, so we need to be thoughtful about this.”

The South Pacific nation of Fiji is actually the host of the summit, but the location was moved to Bonn since the small island nation, already pummeled by climate change impacts, wasn’t able to accommodate the thousands of conference participants.

McKenna said she participated in a morning Gender Talanoa event, named after a Fijian term that means to listen and learn.

She cited a poignant moment when a Kenyan women said that society should turn to women for solutions, instead of portraying them only as victims.

“So she was talking about an initiative in her community to start composting,” McKenna continued. “It was the grandmother, she was saying: ‘Well why don’t you actually compost?’ So now there’s a whole initiative in the community, helping to grow better food, local food, so I think (there are) a lot of good stories, so good action.”

When asked about what the gender proposal would mean, McKenna said the expectation would be to have more women from all countries at the negotiating table.

“So I think that that would put a lot of pressure on countries to make sure that they are training women, that they’re getting women represented on delegations,” she said. “I think it’s also just as I said, the policies — thinking about when you make policies, what is the impact? And we’ve seen this in Canada. We have gender-based plus analysis.”

This means thinking about impacts of policies to ensure women are part of the solution, she added.

McKenna and the Trudeau government have also faced criticism from environmentalists for not being ambitious enough to fight climate change. At last year’s annual UN summit in Morocco, a Canadian reception was interrupted by protesters warning the government not to approve new oilsands expansion pipelines.

And in recent months, anti-pipeline protesters have accused the Canadian government of pushing its own climate change goals out of reach by approving new projects that will lead to an increase in carbon pollution from Alberta’s oilsands, Canada’s fastest growing source of carbon pollution.

This year in Bonn, California Democratic Governor Jerry Brown has found himself in the same company as the Trump administration, both facing jeers and boos in the middle of their own events for supporting some fossil fuel production in their respective economies.

McKenna said that she appreciates people who push governments to be ambitious and do more, but she noted that California and Canada both have a series of climate policies in place or underway. In Canada, she said the government is working on putting a price on pollution, phasing out coal-powered plants, reducing the energy footprint in buildings and making major investments in public transit.

She also praised Brown for taking important steps that have led other jurisdictions.

“I would say with Governor Brown, he has been an amazing climate hero, and I would really put him in the hero category because he is the one that really showed that you can have a carbon market, that you can put a price on pollution and at the same time, you can grow your economy,” McKenna continued. “And that’s a really important message because we all know we need to get on with it, that polluting isn’t free. Also if you look at the standards for net-zero (emissions) vehicles and vehicle emissions standards, he has been a real leader.”

For reasons like these, she said she appreciates working with governors such as Brown or Jay Inslee from the state of Washington.

The White House, on the other hand, has taken a different approach, she said.

Canada and the United Kingdom have also been pushing plans to phase out coal, inviting other governments to join their efforts.

In the meantime, McKenna said that Canadian negotiators are working hard to help push action to fight climate change further before the conference concludes at the end of the week.“…because we need to be moving forward together and then we can be more ambitious together."

Trudeaumaniacs.....if they only really knew.....

I'm STILL not impressed! As

I'm STILL not impressed! As has been declared BEYOND A DOUBT in such tomes as the Leap Manifesto, all other issues - gender disparity, justice and peace, job creation, etc., etc. - are solved with ACTION! So WHY are we still talking and negotiating?!!