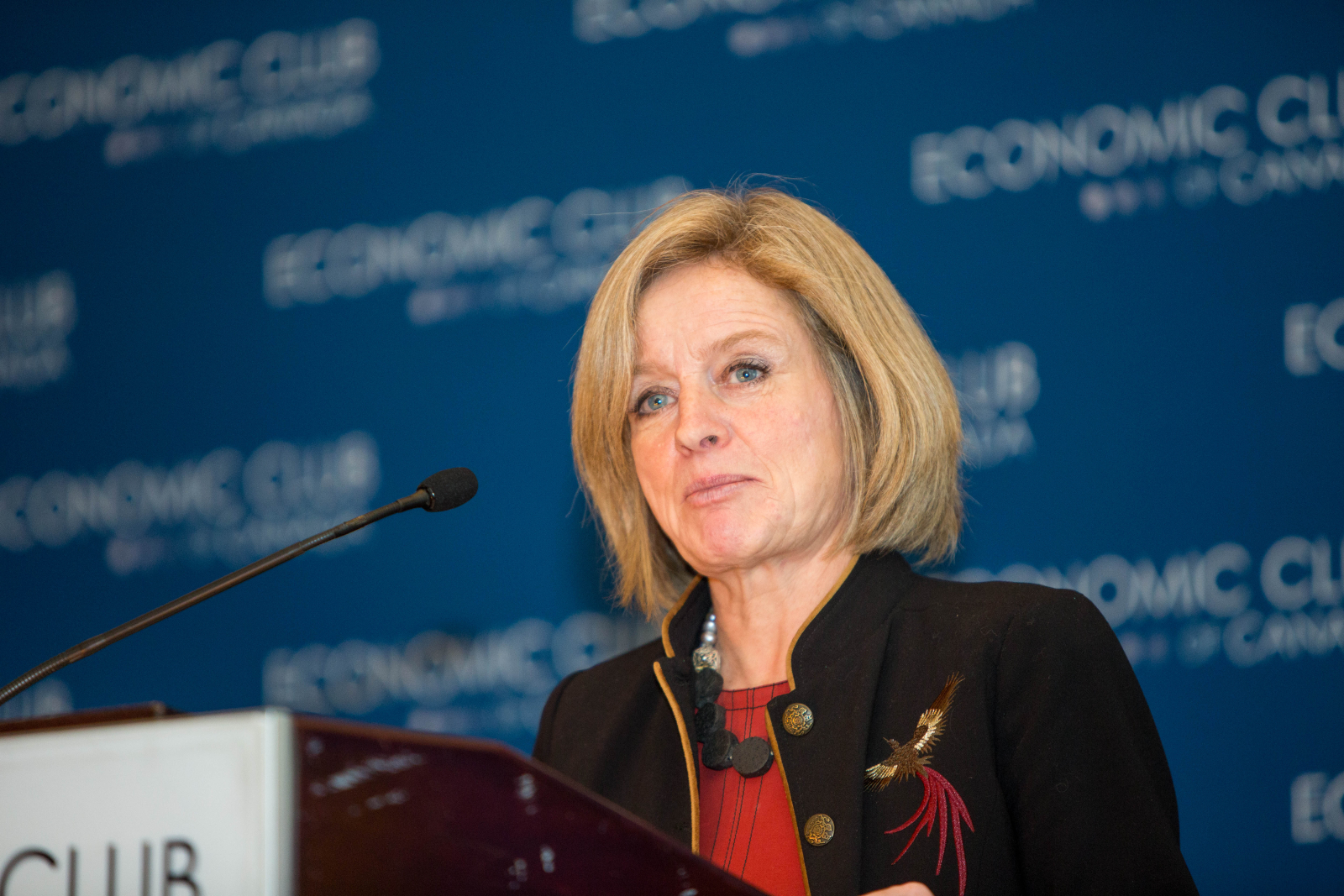 Alberta Premier Rachel Notley arrived at the doorstep of federal power today to deliver a stern message to the Trudeau government on the Trans Mountain pipeline expansion: “step up.”

The premier was in Ottawa to push the Alberta NDP government’s message that the development of Kinder Morgan's Trans Mountain expansion pipeline was synonymous with a more prosperous future for the province and for the nation.

It is a message she’d like more help from the Trudeau Liberals in delivering.

Alberta recently announced, along with Saskatchewan and British Columbia, that it intended to intervene in a legal case launched by Kinder Morgan against the city of Burnaby. Kinder Morgan is alleging that the Vancouver suburb is deliberately delaying permit approvals to block the Trans Mountain project. Alberta and Saskatchewan are supporting the company in its efforts, while B.C. is defending its own right and the right of its cities to manage their own approvals process for permits.

The Trudeau government says it still supports the Kinder Morgan project, which it approved last November, but it has announced that it won't intervene in the case.

"To the government of Canada, led by the Liberal Party of Canada, I say this: Step up," said Notley.

"Now, more than ever, Canadians need our national government to articulate and defend the national interest, because Trans Mountain is a project that we all need, and now we need to get it done.”

Demand for oil worldwide will “continue to rise,” Notley said, and “the world can either buy its oil from Alberta, where we are taking climate change seriously, or it can buy it from places with runaway emissions like Venezuela and Russia.”

But that means that Alberta, and its pipeline ambitions, “has to be on the team” for Canada to have any hope of meeting its climate targets, she said. “The federal government cannot do its work for Canadians if it can’t pay for it.”

Notley positioned herself as part of the “moderate, progressive majority in Canada” and warned this mass of Canadians “risk being out-shouted” by voices calling for provincial budget cuts or climate deniers.

“I hope the government of Canada will speak up loud and clear on these issues,” she said.

Notley also came out guns blazing to other political factions in Ottawa.

To her "friends in the Official Opposition," the Conservative Party of Canada, "and to their cousins in Alberta," the premier said: “stop playing politics.”

Denying climate change, she said, “won’t get pipelines built,” and “refusing to address climate change is offside with the energy industry in Alberta.”

And to members of the federal NDP, she pointed out her government’s support for progressive issues, like a $15 minimum wage, a gender-balanced cabinet and replacement for “regressive” taxes and “predatory lending.”

“You can’t make progress on the climate if you tell working people that their jobs don’t matter,” she said.

The International Energy Agency, an intergovernmental partnership that is considered to be a conservative-leaning body, estimated in 2012 that two thirds of existing global reserves of oil, gas and coal would have to remain in the ground, between now and 2050, to prevent global warming of more than 2 degrees Celsius above pre-industrial levels. This temperature threshold is considered to be a dangerous tipping point that countries have pledged to avoid under the 2015 international Paris agreement on climate change.

Notley reiterated her stance that the National Energy Board's decision to consider downstream emissions in pipeline proposals is "an historic overreach, something no other industry is subject to," and "should not, and cannot, be a precedent that applies to future projects."

The NEB has decided to stage a full hearing after Kinder Morgan complained about delayed permits for Trans Mountain. Natural Resources Minister Jim Carr told reporters earlier this month that while the government wants the pipeline built, the board is "independent" and will "use its own processes" to decide the merits of the case.

Notley said the "efforts of local councils to frustrate the national government's decision, that was made in the national interest, must be met head on."

"There are legal issues that we know will work their way through the courts, as they should. And there is a discussion with the people of Canada that we need to continue to have like the one we're having today," she said.

But most Canadians, she added, "in each and every province of this country — including British Columbia — support the moderate, progressive, balanced approach that I've outlined today."

Before her speech, the Economic Club played a video produced by the government of Alberta and featuring scenes of Notley set to upbeat music, smiling and shaking hands with workers while wearing a hard hat, and video of pipelines being built, and of the premier behind a podium that said “climate leadership.”

Notley’s speech touched on many of the same themes, and included many similar passages — some practically verbatim — as the one she gave in Toronto yesterday at the Empire Club of Canada.

The premier announced Nov. 6 that she would be embarking on a cross-country tour to promote the Trans Mountain pipeline expansion.

Editor's note: This story was updated at 4:25 p.m. EST to include additional comments from Premier Notley and to provide context about those remarks.

Is Rachel Notley familiar with the hugest threat humans have ever faced on this planet - the ongoing trauma of rapid climate change? Our "national interest" cannot run counter to our need as a species to end fossil fuel carbon in the atmosphere. We cannot continue to produce fossil fuels and our jobs must align with planetary survival.

Rachel, building Pipelines as your part in the Battle Against Climate Change is like Fighting to End Wars. Or F*cking for Virginity

Well said...its rare on these

Well said...its rare on these issues one gets a laugh. But you achieved your point and provided some needed levity too. Thanks

Notley is myopic, and

Notley is myopic, and becoming more so every day! Her idea of "a moderate, progressive, balanced approach" is global suicide by 2050 at the latest. I doubt that her oil will be a palatable main course at a Canadian thanksgiving dinner just a few years down the road when there won't be any meat left to eat and damned few vegetables as our population continues to rise and our agricultural production falls!

Alberta cannot continue to be

Alberta cannot continue to be a backwater, denying the reality of what increasing emissions will do to our planet if allowed, and continuing to deny the extreme effects of fracking on our air, water and soil.
We need to set an example, not be made an example of the worst by a dying, polluting industry. There are plenty of jobs available in renewable energy. If we gave half the support to this industry that the oil and gas industry has enjoyed with the world's lowest royalties, we would be able to build renewables at the needed pace.

To advocate, at this late

To advocate, at this late date, expansion of extraction, distribution, and burning of oil and gas and coal, is to take a path to world collapse. There is absolutely no question we are experiencing climate change, and MUST speed up the reduction of GHG emissions. NOTLEY!!-- READ the excellent summaries by Figueres etal (Three years to safeguard our climate-- nature.com 28June2017) and McKinnon (The Managed Decline Of Fossil Fuels-- Oil Change International 13Nov2017 in Below 2C). The countries of the world, represented by the UN, are developing plans to reduce warming. They must be fair and prepare for a just transition that will protect workers and communities. Speed and ambition is paramount. As the International Trade Union Confederation grimly puts it, there are no jobs on a dead planet. But a key element of a managed decline is that it must come hand-in-hand with a just transition for jobs and communities that have become dependent on the production of fossil fuels. The old model of ever-continuing fossil fuel growth is being replaced by sustainable clean growth and a sustainable societies.

Rachel is doing what I guess

Rachel is doing what I guess her handlers think she must do to get a second term. But we should consider this: It didn't work out so well for Alison, and the 'bitumen bubble' can be bounced around as much as any politician wishes. If the people, and the communities, where these pipelines intend to create sacrifice zones for something called 'the national interest', refuse to let them pass, no fancy speeches to the entitled empire clubs or boards of trade, will make much difference.

Of course the wealthy shareholders and easy money entrepreneurs in high places can be convinced its in their national interest.....and some unions might want the construction jobs.........but if the people who intend to keep living on the territory Kinder Morgan wants to trespass over are determined not to have a bitumen pipe in their back yard.......

Then I don't see how its going to be built. It's true as another commentator put it, that 'there are no jobs on a dead planet'. There's also no livelihood left after a bitumen spill and the people on the ground increasingly know that.

I'm putting my money on Burnaby and Vancouver.