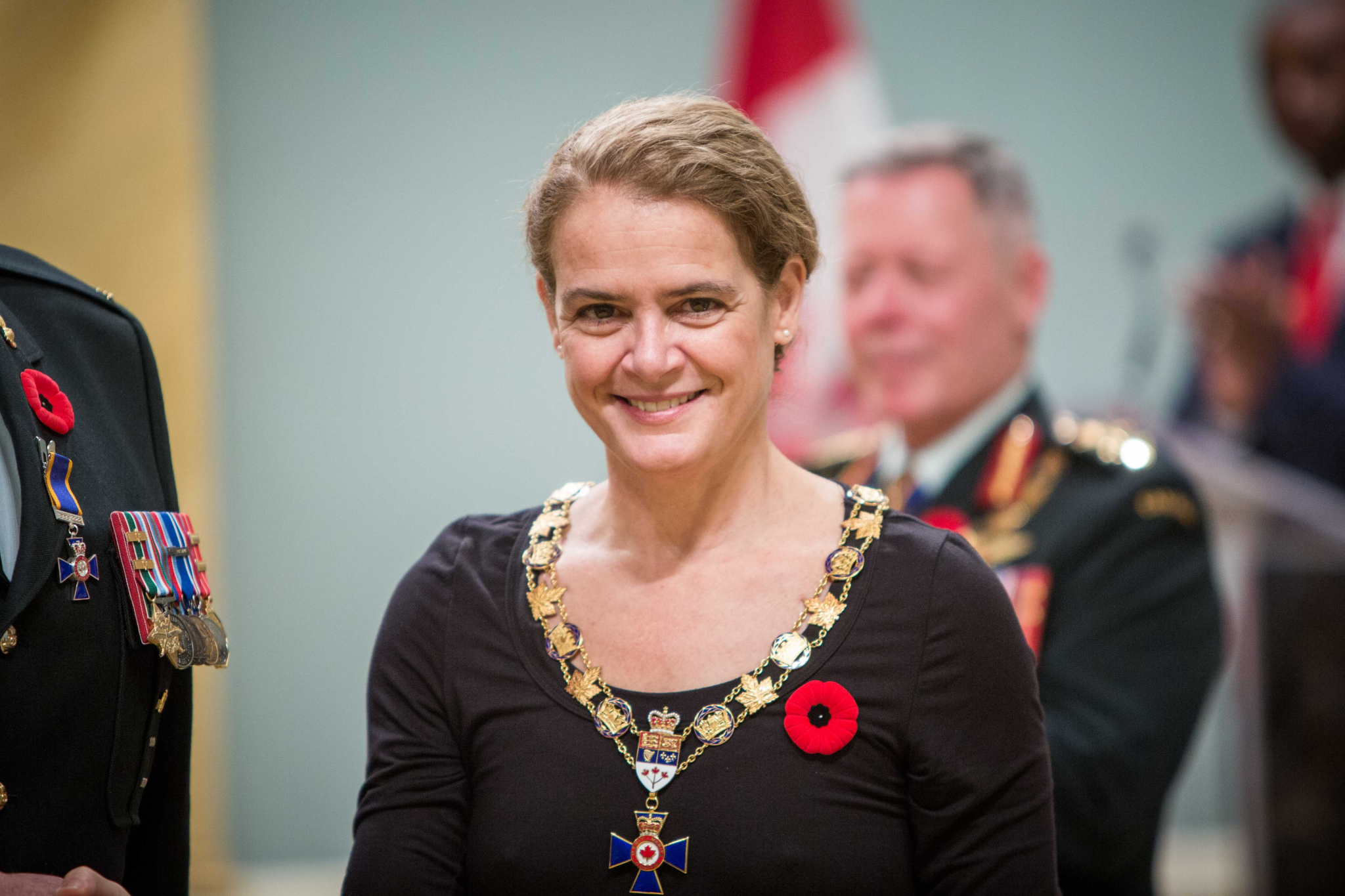 Governor General Julie Payette at an Order of Military Merit investiture ceremony at Rideau Hall on Nov. 10, 2017. Payette took the opportunity to criticize anti-science "myths" in a speech on Wednesday. Photo by Alex Tétreault
Previous story
Next story

Payette, a former astronaut and engineer who logged hundreds of hours in space, took the opportunity at an awards ceremony Nov. 22 to “highlight three ‘historical’ myths that relate to the field of science” — one of which was the conspiracy theory that the moon landing was faked.

“As for the moon landings, they did indeed take place!” she said, according to prepared remarks obtained from Rideau Hall.

“All kinds of evidence exists. We can hold in our hands moon rocks brought back to Earth. Detailed documentation exists for every step of the journey. And there are thousands of people who worked on the missions, including the astronauts who went to the moon themselves.”

It wasn't the first time the governor general has used her position to stand up for science. Earlier this month, Payette took aim at the validity of horoscopes, climate denial, anti-medicine beliefs and creationism, in a speech to scientists in Ottawa.

That speech led pundits to debate her role as the Queen's representative and as Canada's commander-in-chief. Prime Minister Justin Trudeau praised her remarks, although, that, in turn, provoked disappointment from Conservative Leader Andrew Scheer.

On Wednesday, Payette questioned why “the myth that we didn’t go to the moon” still persists. “Ironically, one reason is because the story of the Apollo missions is receding into history,” she said.

“Many of you in this room will remember the thrill of the first moon landing, but many of you weren’t born at that time. This makes it even more important that we have historians to learn the true story and to clearly and accurately present the facts of the matter for future generations.”

Payette was speaking at the Governor General’s History Awards, Canada’s top honours in history and heritage.

The annual awards honour eight Canadian history teachers who are “leaders in the classroom” and also recognizes media, projects and initiatives from local communities, as well as Indigenous and youth accomplishments.

The moon landing’s accuracy bubbled to the surface this week after Fox News issued a tweet that seemed to suggest, without context, that it considered the moon landing to be up for debate. “You be the judge: Skeptics say picture debunks moon landing,” the tweet read.

Another long-running conspiracy theory arose this week when a California man told the Associated Press that he would launch himself in a rocket in order to prove that the Earth was flat.

“I know about aerodynamics and fluid dynamics and how things move through the air, about the certain size of rocket nozzles, and thrust. But that’s not science, that’s just a formula."

A month into her new job as governor general, Payette spoke to scientists in Ottawa and questioned why “we're still debating and still questioning whether humans have a role in the Earth warming up or whether even the Earth is warming up, period.”

"We are still debating and still questioning whether life was a divine intervention,” Payette went on, “or whether it was coming out of a natural process let alone, oh my goodness, a random process.”

During that speech, she also dismissed people who believe “maybe taking a sugar pill will cure cancer” and those who believe in horoscopes, or as she described it, “looking at planets coming in front of invented constellations.”

In the aftermath, some argued she had “jeopardized her neutrality” while others argued she was injecting “common sense — and science — into the national conversation.”

Her comments were applauded by Trudeau, who said he appreciated the “firmness with which she stands in support of science and the truth.” But Conservative Leader Andrew Scheer called Trudeau’s comment “extremely disappointing” in a Facebook post.

“Respect for diversity includes respect for the diversity of religious beliefs, and Justin Trudeau has offended millions of Canadians with his comments‎,” he wrote.

In her speech on Wednesday, Payette praised history as a “very relevant subject, especially in today’s fast-paced world of instant, global communication.”

“A good history student looks for and evaluates facts and evidence. The study of history teaches us to think critically, about our past, present and future. It helps us understand others. It contains many lessons for us,” she said.

In addition to the moon landing, Payette also questioned the ideas that Albert Einstein failed math as a student, and that Issac Newton developed the theory of gravity after being hit on the head by an apple.

“The historical record shows that all three are wrong, to varying degrees,” she said.

“Einstein didn’t fail math. However, according to school records, he did flunk the language, botany and zoology parts of the entrance exam he took to Zurich Polytechnic when he was 16. But, the exam was given in French, a language he didn’t know well.”

As for Newton, she said he “really did come up with the idea of gravitation when he saw an apple fall from a tree” — but didn’t get hit on the head by an apple.

“That part of the story is false! History shows us we always have more to learn,” said Payette.

Well done Ms Payette! It's high time we had a Governor General who didn't feel coerced into silence in the face of falsehoods. The idea that we can hold beliefs that must command respect, and worse yet, uncritical silent respect, is a domineering idea, which has no place in the Canadian mosaic.

Believe what you want, so long as it harms no one.....but do not expect because you elevate some opinion or idea to the status of a belief, that the rest of us have to show deference. Some ideas are not supported by fact. Some beliefs suffer from a similar lack of evidence. Continue to hold them anyway, but expect to be challenged by those of us in possession of evidence.

I'm so tired of right wing two step thinkers trying to dominate the public conversation with their 'beliefs'. We have a planet in trouble, war everywhere, hungry children and unemployed people on the streets.......and all we can get hung up about is our divine right to believe whatever we choose???

How Medieval of us! But praise the divine energies....suddenly, there is a Julie Payette!

Thank you for commenting,

Thank you for commenting, Mary. Canada seems to be one country where religion doesn't hold an unduly large influence over politics, and her push for science is important especially today.

Science discussions are about

Science discussions are about science. Religion discussions are about beliefs. There is no equivalency. People like Scheer who seek to make political hay out of this kind of nonsense are at best knowingly deceitful. What a breath of fresh air to have a person speak the truth openly and directly.

Agree entirely! It's high time that someone in a position of authority takes on the likes of Fox News and those who would send us back to the Stone Age for the sake of oil profits. The world is at a tipping point. Most of our lives and our children's lives are at risk due to climate change. Climate change deniers must be called out and oil company executives who support them should be jailed. Thank you for your courageous words, Ms. Payette.

Our esteemed GG is trying to

Our esteemed GG is trying to create the new myth that Einstein's 1895 entrance examination for the Zurich Polytechnic was in French. The link below describes in excruciating detail how he was to be tested. In fact, he could pick any of four languages (German, French, Italian, English) for the test. It is unlikely he picked French. I know this is all too pedantic but according to our GG details matter.

I was not a fan of her

I was not a fan of her statements in discrediting the faith of people. There are many who participate in religion for the sense of community, tradition and for other aspects beyond literal belief. She may have a high IQ but her EQ is somewhat lacking. There is value in social connectivity and community and a spirit of charity that the church offers and she should have more respect for the totality of it's function and not dwell on her own interpretation of it. She is there to serve all Canadians. Not just the ones who are of her own ilk. Ms. Payette must also have regard for the fact that politics itself is a faith based system too. So is the concept of money and the man made belief that lines in maps are real. These are all exclusive man made concepts not of the natural world.