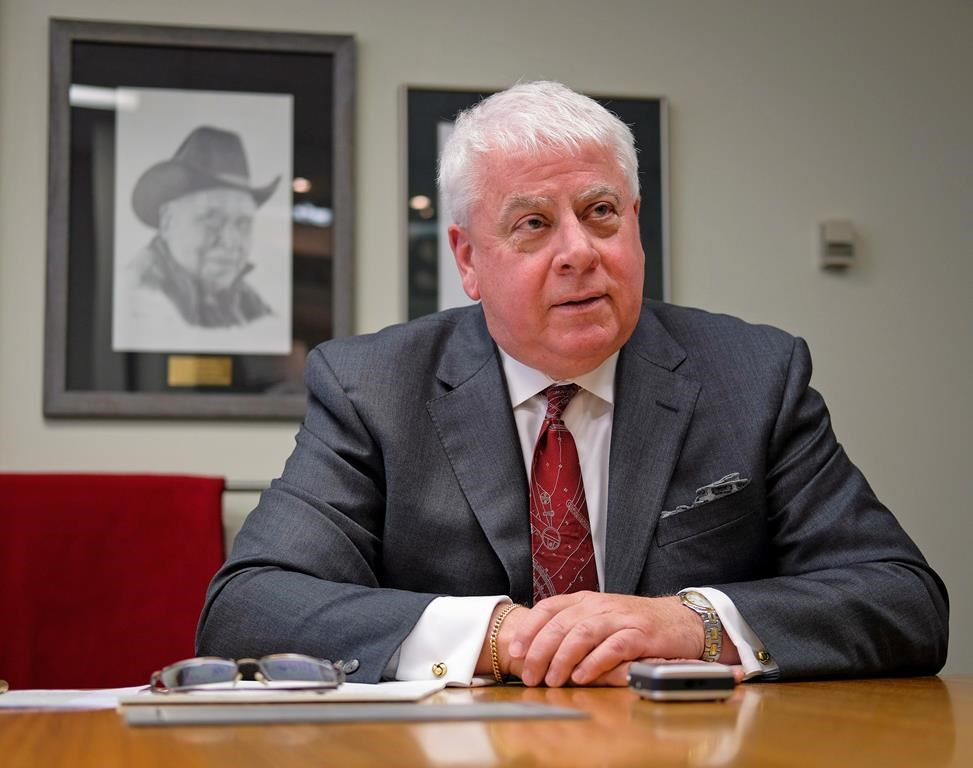 Kinder Morgan Canada president Ian Anderson sits down for an interview in the company's Calgary offices on May 26, 2016. File photo by The Canadian Press
Previous story
Next story

The Texas-based multinational energy company requested the hearing to convince the National Energy Board to quash municipal bylaws that it claims are causing delays in pipeline construction and millions of dollars in losses. The company has also argued that it has had trouble understanding what the rules are in Burnaby.

For its part, the city of Burnaby has blamed the company’s incompetence for delays, claiming that Kinder Morgan has struggled to follow rules that apply to all developers.

Burnaby, part of the Metro Vancouver region, has become ground zero for opposition to Kinder Morgan's Trans Mountain pipeline expansion. Once completed, the project would triple the capacity of an existing pipeline, allowing it to ship up to 890,000 barrels of oil per day. The city would be the site of an expanded oil tanker terminal servicing 400 tankers per year through Vancouver harbour.

Supporters of the project argue that Canada's oilsands producers would get access to new markets in Asia, promoting new jobs and growth.

Opponents say the project would violate Indigenous rights and be too risky because of its environmental impacts.

If completed, the project would increase oil tanker traffic in the territory of the Tsleil-Waututh Nation, a region that is home to endangered killer whales.

A lawyer for the city of Burnaby, Gregory McDade, said that the NEB provoked an appearance of bias in its hearing by making an "unprecedented" decision to question witnesses. This accusation could be grounds for an appeal that would provoke more construction delays if the regulator sides with the company and allows it to bypass Burnaby's bylaws.

The NEB announced that it was going to intervene and raise questions during the hearing after lawyers from both parties had mutually agreed to forego cross examination, restricting their questions to their own witnesses at the hearing. This process allowed each side to focus on their own evidence and statements.

But McDade argued that the NEB's intervention could taint the process since their lawyer could lead witnesses or allow Kinder Morgan to add new evidence to the record in the middle of the hearing.

"The objection is really twofold," McDade told the panel in Calgary on Wednesday. "One is that by becoming an examiner after counsel have closed the evidence, as I say, causes the lack of impartiality. And if it's questions in the nature that go beyond clarification, (it) creates an apprehension of bias."

Kinder Morgan lawyer Maureen Killoran disputed McDade's arguments, noting that the NEB, by law, has full powers of inquiry and can gather all the evidence it needs to make decisions.

"In fact, it would be inappropriate for you (the panel members) to make any kind of determination if the panel is of the view that you do not have all of the information in front of you," she told the panel. "And frankly I don't understand Mr. McDade's suggestion that there is some inherent unfairness in your questioning of witnesses."

He proceeded to ask a range of questions of both sides. Watton pressed Kinder Morgan to confirm that Burnaby was the only factor delaying construction, and asked Burnaby for technical explanations about what was "deficient" about Kinder Morgan's permit applications.

But Watton was forced to withdraw a couple of questions, after McDade stopped him, raising objections that the NEB lawyer was asking "leading questions" of Kinder Morgan, and conducting a "cross-examination" of Burnaby city official, Lou Pelletier.

"What part of the affidavit are we dealing with here? I’ve been listening carefully for the last 20 minutes, and I think we are well into the realm of cross-examination," McDade, the Burnaby lawyer said after raising his objections. "We’re dealing with this affidavit in an entirely different way than the softball questions on the Trans Mountain matter... This is an examination at large which is exactly what it is not authorized to be. So I’m expressing my objection to that question.”

Burnaby officials as well as B.C.'s NDP government have described the case as an unprecedented power grab by Kinder Morgan to circumvent their authority to regulate economic activity, as defined under the Canadian constitution. Alberta's left-leaning NDP government and Saskatchewan's right-leaning government have both argued that Burnaby should not be allowed to delay a project that has already been approved by the federal government.

The city's tree and zoning bylaws are among the issues that triggered the hearing.

For example, the city has accused Kinder Morgan of trying to avoid counting and compensating for trees lost due to construction, just like any other developer in the municipality would be forced to do. Kinder Morgan executives told the hearing that they were "unclear" what was required to obtain approvals for their permits in Burnaby.

Members of the NEB panel, David Hamilton, Phil Davies and Alison Scott, did not pose any questions to the witnesses during Wednesday's hearing. The three are the same members that reviewed Kinder Morgan's pipeline and recommended that the Trudeau government should approve the project.

The NEB hearing resumes on Monday as the two sides in the Burnaby case present their final arguments.

Editor's note: This article was updated at 9:30 p.m. ET to correct the name of NEB lawyer Mark Watton.

The NEB resumes it's Kangaroo

The NEB resumes it's Kangaroo Court

And I voted for the Federal

And I voted for the Federal Liberals because, amongst many other reasons, they were going to redo the NEB so as to remove the industry bias. They still have Harperites sitting on the Board.
And we do need to examine both Upstream and Downstream risks BEFORE this INSANITY continues.
Who is going to get stuck with the TAR SANDS CLEANUP bill? And what about the THIRD PARTY TANKERS? Even if the Pipeline is PERFECT [imagine a Spill-less pipeline!!!] what about the messes at either end of it?
Many unanswered questions involved here.

I didn't vote for 'em because

I didn't vote for 'em because I assumed they were lying. After all these years I'm amazed that anyone still believes a word that comes out of a Liberal politician's mouth. Sure, all politicians lie somewhat--but Conservative politicians will often tell you up front that they're going to do horrible things. And then they do them. And NDP politicians still have a wistful memory that they got into this to stand for something. But Liberals? The whole point of the Liberal party is to do whatever is most comfy for the powers that be and say absolutely whatever it takes to be put in a position to do that stuff. They have no principles and never had any, whether good or bad.
As to those tankers . . . one spill and Vancouver's tourism, the seawall, masses of marinas--everything bye-bye. And I don't see Kinder Morgan paying the billions that will cost us, let alone magically giving us back the quality of life we'd lose.

Kinder Morgan has shown incompetence on numerous occasions, so I am not surprised that its applications to the City of Burnaby are not done properly. In fact I would be very surprised if they were done properly.

The three NEB monkeys - see no evil, hear no evil, speak no evil.

I have to object to "Alberta

I have to object to "Alberta's left-leaning NDP government". They are not NDP, they are Comservative-lite corporate lackeys who promised environmental and species protection, to make energy companies "pay their fair share", overhauling or replacing the AER, and more. Job 1 after winning was appearing at the Calgary Petroleum Club to announce "Business as usual" to industry. She then slashed oilpatch fees to the lowest ever, said the AER was great as-is with zero investigating, passed climate change plans that increase emissions over 40% (while exempting the worst polluters), went to war on wildlife, and more. The $15 minimum wage is one of very few left-ish leaning changes, the rest are blatantly for business. This week it's over a billion to help polluters "adapt" to cleaner tech and "diversify" into renewables, etc. Wouldn't it be novel if governments passed GHG reduction legislation and not only didn't exempt the biggest polluters from following it, they were banned from all subsidies until they were compliant? That would be a "left leaning NDP government".