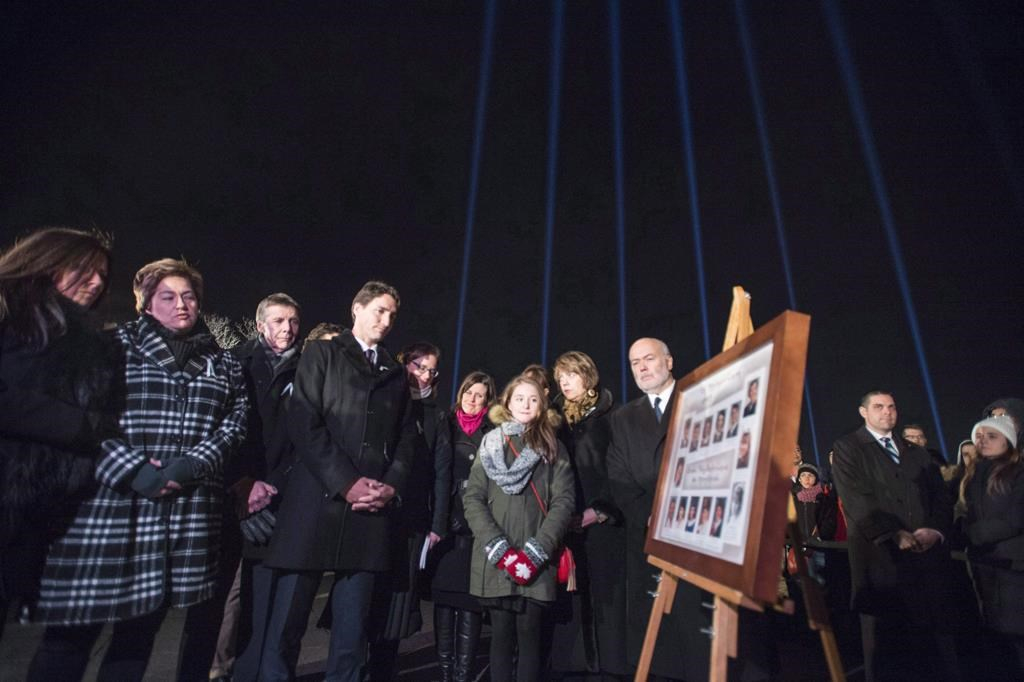 Beams of light, one for each victim, shine over Justin Trudeau as he takes part in a memorial ceremony for the fourteen women murdered at École Polytechnique 26 years ago, in Montreal on Dec. 6, 2015. File photo by The Canadian Press
Previous story

Canadians are commemorating the 28th anniversary of the Montreal Massacre when a gunman shot 14 women to death and injured 14 other people.

Dignitaries, citizens and families of victims are taking part in two official events today to mark the tragedy that took place Dec. 6, 1989 at École Polytechnique.

In a brief outdoor ceremony this morning, representatives from the school laid bouquets of red, white and pink roses in front of a commemorative plaque outside the school bearing the names of the women who were killed there 28 years ago.

The two dozen or so people who attended the brief outdoor ceremony stood in silence, some wiping away tears as they remembered the Montreal Massacre, when a gunman shot the 14 women to death and injured 14 other people on Dec. 6, 1989.

"It's with the presence of those women and all the women who were in engineering before us that we're able to study," she said after the ceremony. "They're the women who cleared the path."

Michele Thibodeau-Deguire, the school's first female civil engineering graduate, remembers when the site was transformed into a sea of white roses in the days following the worst mass shooting in the country's history.

"It was something that came out; people just wanted to show how they felt," said Thibodeau-Deguire, now the head of the school's board of directors. "And every year, white roses were brought here at the door of Polytechnique."

In recent years, she says the school has worked to transform the anniversary — and the symbol of the white rose — into something positive.

That includes awarding an annual scholarship to a female engineering student in memory of the victims, and by selling white roses to help fund a science camp for girls from underprivileged neighbourhoods.

"From something horrible, something beautiful came out," she said.

A ceremony for the 14 victims will be held at 5 p.m. at the lookout atop Mount Royal Park. Deputy premier Dominique Anglade, Mayor Valerie Plante and Sophie Grégoire Trudeau, the wife of Prime Minister Justin Trudeau, are scheduled to attend.

Fourteen light beams will be installed at the lookout representing the 14 women and will shine light into the night sky between 5 p.m. and 10 p.m.

Heidi Rathjen, a former École Polytechnique student and witness to the massacre, said it is still important to remember what happened 28 years ago.

"It's pertinent to talk about it with regard to gun control," said Rathjen, who helped start a group that lobbies for tighter firearm regulations. The anniversary of the shooting is a good time to discuss guns laws in Canada "in order to diminish the chances that this kind of tragedy happens again," she said.

During a trip to China, Trudeau took part in a candle-lighting ceremony at the Canadian Consulate in Guangzhou to mark the National Day of Remembrance and Action on Violence Against Women.

In a statement, the prime minister said the "senseless and hateful act of violence" was a "devastating reminder of what can happen when hatred and misogyny prevail."

Trudeau said more must be done to speak out against gender-based violence against women and girls both in Canada and abroad.

"That means valuing the voices of women and girls, fighting the injustices and inequalities that put the most vulnerable women at the greatest risk of violence, and breaking down a culture that dismisses women's worth — from Hollywood studios to the halls of Parliament," he said.