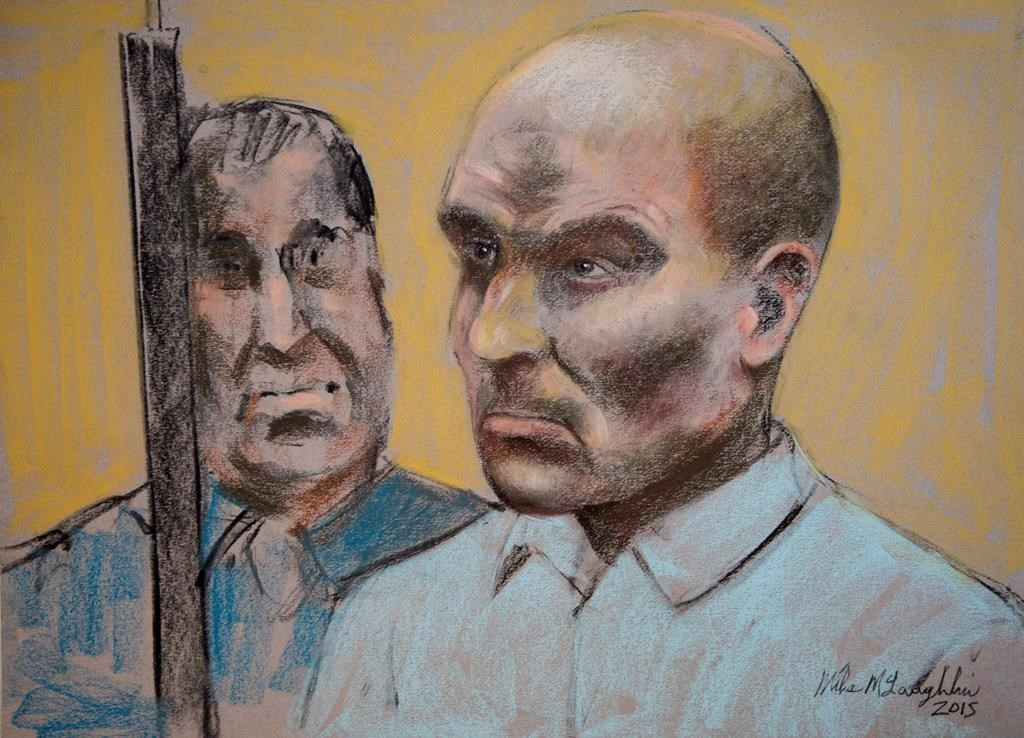 Bertrand Charest, who faces a total of 56 charges involving 11 young females, is seen on a court drawing during a bail hearing on March 16, 2015 in St-Jerome, Que. File photo by the Canadian Press/Mike McLaughlin
Previous story
Next story

The 20 years that have passed since Bertrand Charest's crimes cannot erase the pain he inflicted on his young victims, a judge said Friday as he sentenced the former national ski coach to a 12-year prison term.

In a scathing ruling, Judge Sylvain Lepine described Charest's sexual assaults on the teenage girls he trained as "inexcusable and criminal," especially given their young age and his position of authority over them.

He also highlighted the courage of the victims and alleged victims who testified, all but one of whom were under the age of 18 at the time of the offences.

"To denounce a theft or a fraud is certainly easier than denouncing a sexual assault," Lepine told the packed courtroom in Saint-Jerome, north of Montreal.

"It's an intimate act, targeting the body, the physique, and is also an infringement on the psychological health of the victims."

With time already served in detention since his arrest in 2015, Charest has seven years and 10 months left in the sentence.

In June, Lepine called Charest a sexual predator as he found him guilty of 37 of the 57 sex-related charges he was facing. The convictions involved nine of the 12 women who'd accused him of crimes dating back more than 20 years.

On Friday, the judge had more harsh words for the accused, who stood quietly with his hands clasped in front of him and did not visibly react when the sentence was read out.

Lepine said Charest still did not grasp the severity or the consequences of his crimes and has denied the need for therapy.

He stressed that the victims, the youngest being 12 years old, are still suffering from what he called "serious health consequences" as a result of the abuse that took place between 1991 and 1998.

"It is criminal in Quebec, in Europe and in every country in the world."

Charest's lawyer, Antonio Cabral, said he will look at the sentence in detail before deciding whether to appeal, as he is doing for last June's convictions.

"I am a bit surprised with that (with the length of the sentence)," said Cabral, who had recommended between four and six years. "Twelve years is a significant sentence."

But Cabral said late Friday he will ask the Quebec Court of Appeal next Wednesday to have Charest released pending the ruling on the appeal of the convictions.

Crown prosecutor Marie-Nathalie Tremblay expressed satisfaction, however, as it corresponded exactly to what she and fellow prosecutor Caroline Lafleur had asked for.

"They (the victims) were happy with the outcome, with the sentence, with having been heard and with the judge delivering the message that (such behaviour) is not to be tolerated," Tremblay told reporters.

She said four of the victims listened via videoconference to the sentence being read, while four others were in the courtroom.

The accused, who didn't testify at his trial, was acquitted on 18 charges, while the court said it didn't have jurisdiction over two other counts related to incidents that occurred abroad.

Charest's victims delivered emotional impact statements last month, with one telling the court he had robbed her of her childhood and acted like a predator.

Another cried as she recounted how she lives with "shame, guilt and disgust'' because of the sex assaults.

Some of the offences took place both before and during Charest's stint with Alpine Canada's women's development team between 1996 and 1998.

The national ski organization said in a statement after the June verdict was rendered that the ruling sent a message that abusing authority has no place in sports or in society in general.

"Alpine Canada and its leaders failed miserably in their role as guardians and protectors of these young athletes," he wrote.

"Their parents had entrusted them (Alpine Canada) with their safety. Alpine Canada chose rather to close its eyes, to not believe these young women and to hide the truth."

Cabral said late Friday he will ask the Quebec Court of Appeal next Wednesday to have Charest released pending the ruling on the appeal of the convictions.

The young woman who first

The young woman who first brought all this to our attention [name hidden by Court Order] had been molested by this same man. She sacrificed her personal freedom and relived her personal pain to make sure he did not get to do it all again and helped put this bad man behind bars. When and if her name ever surfaces, she needs to be awarded the Medal Of Canada.