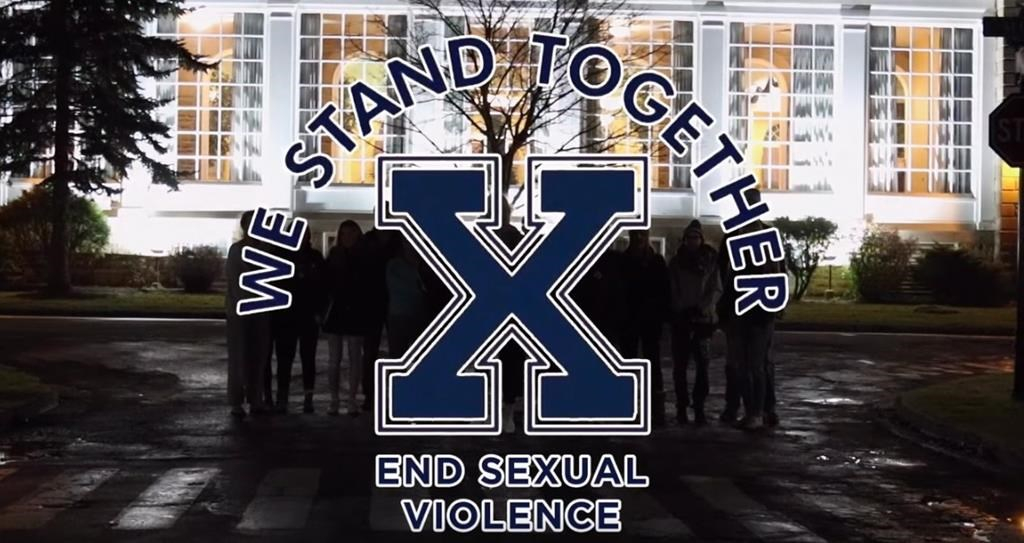 A still image is shown from solidarity campaign video, produced by Donald Jewkes and with spoken word by Emma Kuzmyk. Handout photo by The Canadian Press
Previous story
Next story

Some female athletes at St. Francis Xavier University have come up with a remarkable response to sex charges against members of the varsity football team.

Soccer players have launched a solidarity campaign with sexual assault survivors, quelling a potential backlash that experts say can sometimes rise in the wake of damning allegations against powerful, popular male students on university campuses.

Sarah Bruce, a second-year student on the X-Women soccer team, says she launched the campaign, called We Stand Together, to channel her anger and spark social change on campus.

She designed a logo with the Antigonish, N.S., university's well-known X on top of a pink circle and the words "end sexual violence," which has been widely shared on social media and is now featured on stickers, pins and t-shirts.

The allegations first came to light after an 18-year-old woman reported an alleged assault that took place over a weekend. Another 19-year-old victim came to light during the police investigation.

The charges have not been tested in court. Both accused have been released with conditions and are set to appear in provincial court in January, police said.

The university administration banned one of the men from campus, while another has been granted restricted access to attend classes. All other student privileges, including participating in varsity athletics, have been revoked.

The We Stand Together initiative has been widely supported by football players, says Bruce, who is from Ontario.

"They've been incredible. Almost right away they started posting the logo on their social media and ordering t-shirts," she says of her fellow varsity athletes. "Ultimately at St. F.X. we're a family and we take care of each other."

The campaign is selling t-shirts and accepting donations for stickers and pins to raise money for additional sexual education training at the university.

Yet one of the most moving aspects of the solidarity campaign is the tense two-minute video, produced by Donald Jewkes and with spoken word by Kuzmyk, who is also from Ontario.

The video follows a woman walking home alone in the dark on campus while spoken word poetry and instrumental music gradually grows louder.

The poem questions "if we can raise our voices loud enough to finally be heard" and when "every single one of us will stand behind her."

The video ends with the woman being joined by a group of supporters, all standing in the dark and silhouetted against a brightly lit campus building in the background.

Kuzmyk says she's been writing short stories since she was six years old, and poetry since Grade 8. But she says it's the first time she has shared her work publicly.

"It was a difficult decision but if it has the possibility to help someone or create awareness I thought it would be selfish to not share it," she says.

Kuzmyk says she's had lengthy discussions with fellow students and other athletes about victim-blaming and consent, and that the campaign has received overwhelming support.

Bruce says she never expected the campaign to take off so quickly or to garner such widespread backing, but she credits its success to the contributions of her teammates.

In addition to the We Stand Together campaign, a group of students and faculty on the university's Social Justice Colloquium penned an open letter supporting survivors and calling for more resources and education on sexualized violence.

Students on the Women’s and Gender Studies Society also issued a statement of solidarity in a campus newspaper, The Xaverian Weekly.

Lisa Pasolli, a women’s and gender studies instructor at St. F.X., says the solidarity movement reveals that there are social-justice minded students who understand the broader context in which these alleged assaults took place.

"They are linking the events unfolding on campus to this sort of broader societal reckoning with sexual violence and patriarchy," Pasolli says.