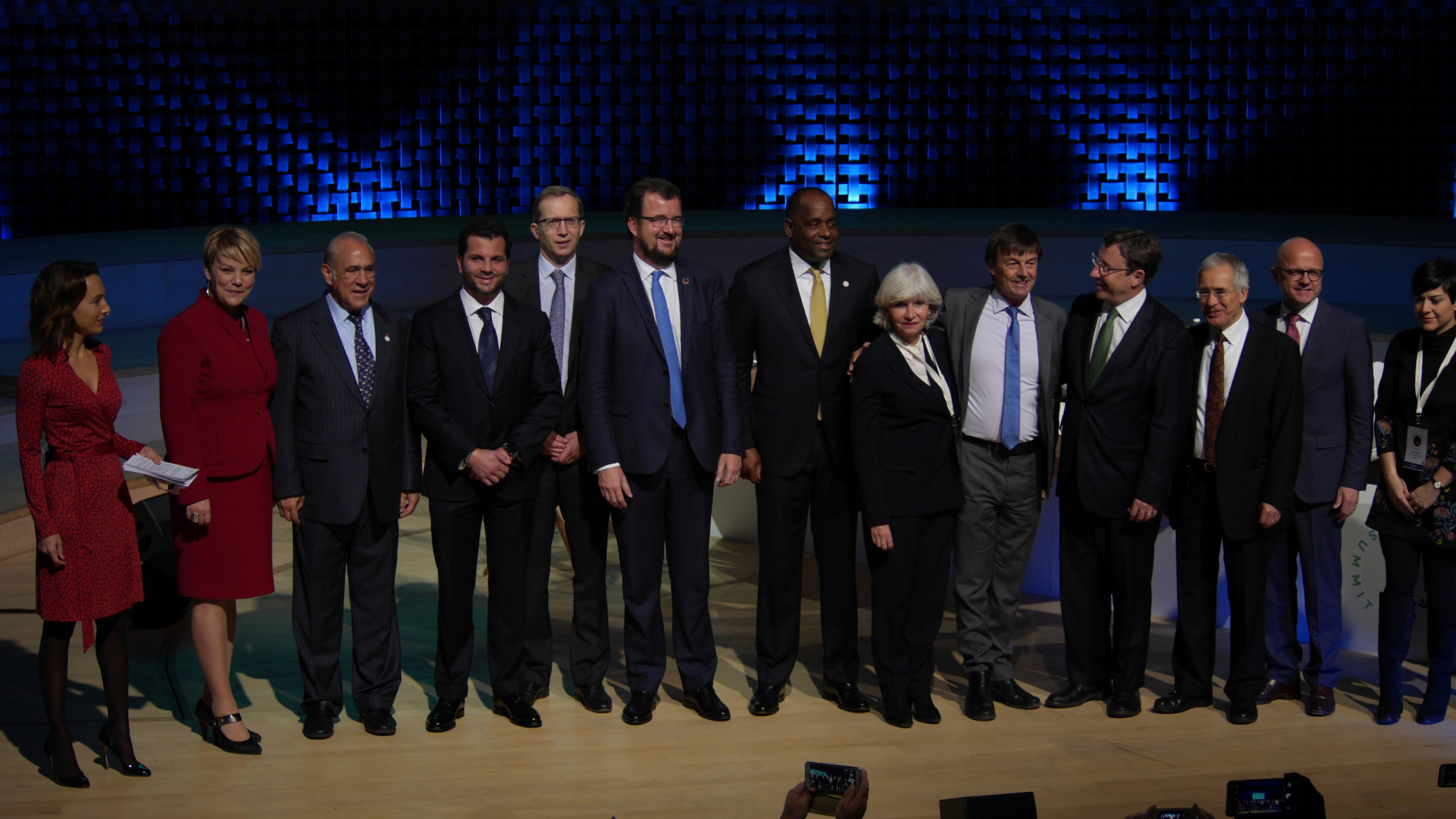 Environmental leaders, including Quebec Environment Minister Isabelle Melançon (second from left) gather for a photo before a panel on public policy and ecological transition at the One Planet Summit in Paris on Dec. 12, 2017. Photo by Clothilde Goujard
Previous story
Next story

The World Bank has confirmed that it will stop financing upstream oil and gas projects after 2019 except under exceptional circumstances in the world's poorest countries.

The global financial institution made the announcement at climate summit in Paris on Tuesday, which took place roughly two years after the historic COP21 climate conference in the same city.

At Tuesday's summit, French insurance giant AXA announced that it will cease insuring the oilsands sector and new coal projects, and will divest more than US$3.5 billion from oilsands and coal companies. This includes divestment from energy giants TransCanada, Kinder Morgan and Enbridge, all of which have Canadian offices and are constructing major pipelines: Keystone XL, the Trans Mountain expansion and Line 3, respectively.

The announcements were among highlights of a one-day "One Planet Summit" attended by about 50 world leaders and 2,000 participants, including Canada and Quebec environment ministers, environmental organizations, business officials and public figures such as actor Sean Penn.

The goal was to find financial solutions to phase out fossil fuel subsidies and allocate more money to help developing countries that will help their transition to low-carbon economies in the fight against climate change.

“We’re determined to work with all of you to put the right policies in place, get market forces moving in the right direction, put the money on the table, and accelerate action,” World Bank president Jim Young Kim told the closing plenary.

Conference co-organizers, including the Government of France, the World Bank and the United Nations, called in advance of the summit for “concrete action” to reignite momentum as the United States remains absent from the historic Paris Agreement on climate change. Reached in December 2015, the accord aims to keep global warming below 2°C this century.

“We are losing the battle,” French President Emmanuel Macron told participants. “The agreement has become fragile and we’re not going fast enough.”

Several financially stable countries and multilateral institutions made important pledges to help developing countries meet their commitments under the 2009 Copenhagen Accord on climate action. That roadmap calls for the world to raise US$100-billion every year to help such countries meet their emissions goals by 2020. Last year however, the OECD estimated that only US$43 billion had been pledged, including $2.65 billion in funding from the Government of Canada by 2021.

The absence of the United States remained bittersweet and disappointing for most participants, including California Governor Jerry Brown and former United Nations secretary-general Ban Ki-moon, who talked about U.S. President Donald Trump’s “irresponsible” decision to withdraw from the Paris Agreement.

But former New York mayor and businessman Michael Bloomberg said he thought it had increased momentum.

“There isn't anything Washington can do to stop us, quite the contrary, I think that President Trump has helped rally people who understand the problem to join forces and to actually do something rather than waiting for the federal government to do something,” Bloomberg said at a press conference.

Bloomberg and several other major economic leaders, including Bank of England governor Mark Carney, announced 237 companies worth more than $6.3 trillion had committed to participate in a wide-reaching Task Force on Climate-Related Financial Disclosures.

The task force aims to gather reliable data about the environmental metrics of its members, such as the carbon footprint of their operations.

According to the task force, only 20 per cent of major companies are currently reporting this kind of data. Bloomberg and his partners want to change that so CEOS, board members and shareholders can make informed decisions about their management practices and investment.

“Nobody would survive a board meeting where they said, 'I don't know that this risk is going to happen so let's just sit around and do nothing,'" said Bloomberg.

One of the task force members is AXA, the world’s third largest insurance company.

Canadian Environment Minister Catherine McKenna was among the world leaders who said private sector involvement in climate financing is urgent in the race against environmental catastrophe.

“We need to be smarter about this. We have to stop the old school way of thinking where governments are going to take actions,” she said at a panel. “We're missing a lot if we don't leverage the private sector.”

“It's really hard to leverage private sector dollars to do adaptation work and that's really where governments need to step in with public money,” Marshall told National Observer.

Pembina Institute federal policy director Erin Flanagan made similar comments. National transitions to a low-carbon economy should be led by governments, she explained, and public policy must create a clear and assertive framework for the private sector, so it understands how it can support the green transition.

Meantime, McKenna unveiled a partnership with the World Bank to support developing countries’ transition away from traditional coal-fired electricity and toward clean energy. A press release said the parties would share best practices "on how to ensure a just transition for displaced workers and their communities."

The partnership announcement came just as a Canadian and German environmental organizations released a report listing six Canadian financial companies among the world's top 100 investors in new coal plants. Friends of the Earth and Urgenwald looked at the top 100 private investors putting money down to expand coal-fired electricity — sometimes in places where there isn't any coal-generated power at the moment.

Urgewald tracks coal plants around the world and reports there are 1,600 new plants in development in 62 nations, more than a dozen of which don't have any coal-fired plants now.

A link to the coal plant

A link to the coal plant financiers report would be helpful. Looks like I have more divestment work to do.