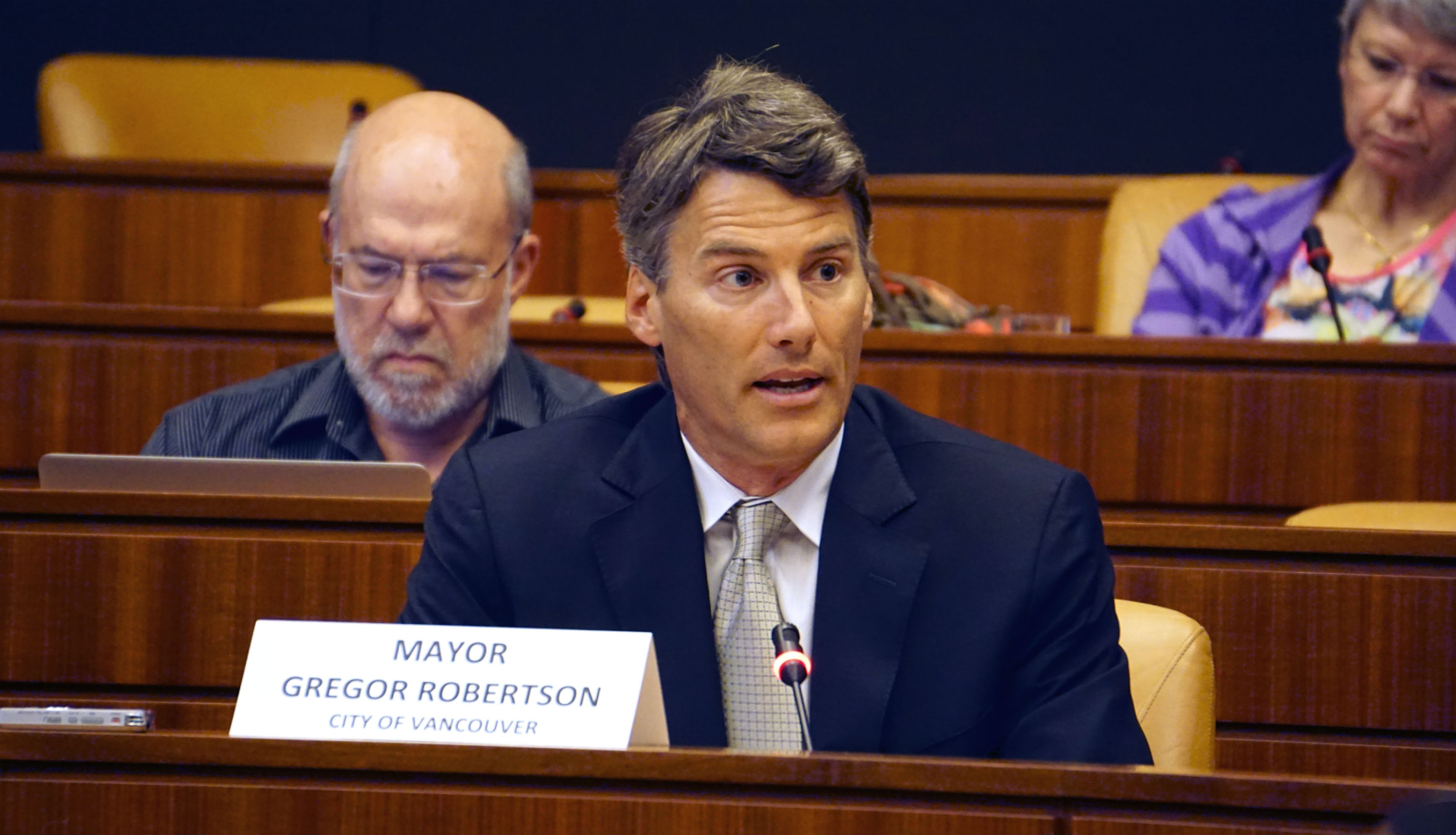 Vancouver Mayor Gregor Robertson announced on Wednesday that he won't be seeking another term, when the city holds its next municipal election in October.

"Today I announce one of the hardest decisions of my life. This will be my last term as mayor of Vancouver," Robertson said in a statement posted on Facebook and Twitter.

It's been an incredible honour to serve our city through such historic and challenging times. After lots of consideration with friends + family over the holidays, I’ve decided this will be last term as Mayor. My statement here: https://t.co/2EQkwMFHRm#vanpoli

Proud of how Vancouver has become one of the most liveable, green, innovative and prosperous cities in the world. 10 years is a long time in politics. Important part of leadership is knowing when it’s time to make room for new voices/leaders. #vanpoli

Next ten months, still lots to do. 2 big priorities: landing Broadway Subway and better transit for all of Metro; getting more affordable rental/co-op/social housing built in all neighbourhoods across the city #vanpoli

Robertson said he "made this bittersweet choice" after speaking with family and friends to reflect on his future. First elected in 2008, Robertson won with 54 per cent of the vote and continued to win three consecutive terms campaigning on a progressive agenda.

"I think it was a tough choice for him," said Mike Magee, who worked as the Vancouver mayor's chief of staff from 2008 to October 2016. Magee said Robertson helped change Vancouver's future through policies such as the Greenest City 2020 initiative and efforts to support renewable energy initiatives.

"I think the city has fundamentally changed for the positive," Magee said. "If you remember 2008, he came in after the city's nastiest strike, labour relations were horrible, there was a recession, Olympic Village was in major trouble, there was a gang war....Vancouver has since become a global model that other cities are trying to emulate. He's been a great mayor for the city."

City Councillor Raymond Louie noted the mayor's "10 years of incredible service" and said next steps for Robertson's succession would begin at the the next annual general meeting of the party, which is scheduled for next week.

Today I announce one of the hardest decisions of my life. This will be my last term as Mayor of Vancouver - I won’t be seeking re-election on October 20.

I took time with family and friends over the holidays to reflect on my future and made this bittersweet choice.

I love Vancouver and our amazing people. I love serving our city as Mayor. When I finish my third term later this year, the decade in office will be the longest consecutive run as Mayor in Vancouver's history. Ten years is a long time in politics. An important part of leadership is recognizing when to step aside to make space for new leaders.

I dove into politics as an entrepreneur committed to making positive proactive change. It's been an incredible honour to serve our city through such historic and challenging times. Thanks to our bold, collective efforts over the past 10 years, Vancouver is now widely recognized as one of the most liveable, green, innovative and prosperous cities in the world.

Vancouver was struggling when I first ran for mayor in 2008 and we've faced extraordinary challenges since then - from the global recession and a regional gang war to the affordability and homeless crisis that is impacting many leading cities around the world. Time and again, the people of Vancouver raised our game to meet these challenges head-on.

We were first in North America to become a City of Reconciliation, working in deep partnership with Indigenous peoples. We helped lead the global fight against climate change. We successfully hosted the 2010 Games. We built the strongest city economy in Canada.

We never shied away from tackling the toughest issues. We didn’t back down from opening homeless shelters, warming centers, modular or supportive housing to help our most vulnerable residents. We made Vancouver a city that speaks out forcefully against racism, homophobia and transphobia. We’ve led the national effort to fight for health-focused drug policy and saving lives in the opioid overdose crisis.

We've made great progress towards being the world's greenest city, we’ve built a creative, resilient economy with leading edge tech and innovation, and become a much safer city. We’ve done more to protect and build affordable housing than any city in the country but we must continue to work tirelessly to end homelessness, and keep pressure on other levels of government to work with us and do their part.

We endured many years with those governments ignoring their responsibilities on critical urban issues. As Chair of Canada’s Big City Mayors and TransLink’s Mayors Council, I pushed hard with Mayors locally and across Canada to see our provincial and federal governments re-engage with cities.

I am incredibly proud of our accomplishments and I will work hard to see that bold action continue. It’s only been possible due to everyone's contributions - my heartfelt thanks to my Council and Vision colleagues, City staff, volunteers, supporters, and citizens in our diverse neighbourhoods. My personal appeal to you all: please continue to step up and do your part to make Vancouver the greatest city in the world.

Because the challenges keep coming at us. We face daunting issues like climate change, homelessness, and mental health and addictions. The much-needed breakthroughs on these fronts will require a passionate, engaged community and bold, progressive leadership at City Hall for the years to come.

I’m fired up for the rest of the term. Over the next ten months, I’ll be focused on securing funding for the Broadway Subway and transit projects across the region, taking aggressive action to approve record levels of affordable housing, and creating even more vibrant public spaces on par with the new Arbutus Greenway and Jim Deva Plaza.

I'm very excited about the 2018 election and electing diverse new leaders. A decade of collective passion and hard work has prepared Vancouver as a launchpad for the next generation of dynamic leadership. I will work hard to elect a renewed Vision team that is open to cooperate with anyone on an ambitious, progressive agenda.

It’s been the greatest honour of my life to serve this extraordinary city, and help make Vancouver an inspiration to people and cities around the world. Thank you for this opportunity, for your constant feedback and your support.

Every day, Vancouverites continue to demonstrate their love for each other, our city, and our planet. We are blessed to live here. With a relentlessly positive approach to politics and government, Vancouver can be an even greater city for us all, and for future generations.

What planet is he on to think

What planet is he on to think Vancouver is one of the most livable cities in the world? For whom? When doctors and dentists can't afford to live there let alone tradespeople, or god forbid, minimum wage workers. Vancouver is a city of dark empty condo towers and empty high end suburbs that are acting as piggy banks for foreign nationals hedging their future against the own corrupt countries. All levels of government have turned a blind eye to the money laundering that has gone on for decades. And now the disease has spread far outside of Vancouver. Don't want to be cynical, but I wouldn't be surprised if his next career is in residential and commercial real estate. Maybe as a front in an overseas sales office? I hope I'm wrong.

NEB purpose is to regulate …

NEB purpose is to regulate …. trade ,in the… public interest. The NEB did not fairly consider the public interest when it ….accepted ONLY the Trans Mountain Expansion Pipeline risk assessment !

Our government is ‘loaded’ with talented scientists that should have taken on this ‘public interest’ issue and arranged for an expert INDEPENDENT risk assessment to ensure that the potentially impacted communities were adequately protected from that inevitable tanker related diluted bitumen spill… ! Our Prime Minister counselled that governments issue permits but ONLY communities give permission .No southern BC communities gave PERMISSION !

The solution …build one common sense pipeline from Alberta to the BC coast ,to a tanker loading terminal that allows tankers easy ,direct access to the open Pacific. That simple !
Let our new Chief Science Officer arrange for ,scientifically, finding the ‘least risk’ tanker routes as concluded after public debate … …at minimum environmental AND financial risk to the communities and the investors.